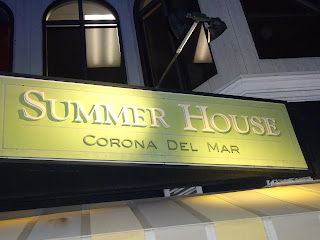 Restaurant weeks are pretty exciting to me. There are no coupons to clip, you just have to check out the prix-fixe menus, see something that piques your interest, and go. I usually cross reference my selections with my restaurant wish list. Even though this particular restaurant week was spread over two weeks, we only had one night available to head to Newport to take advantage of this year's restaurant week deals. Darn scheduling and commitments. Anyways, we chose to spend our lone NBRW experience at Summer House in Corona Del Mar.

Summer House has been on my list ever since Edwin Goei, Restaurant Reviewer from the OC Weekly went by and gave their ginger crusted ono a glowing review. Edwin is definitely someone that I trust wholeheartedly when it comes to restaurants in OC, so when I saw that the ono was available on the restaurant week menu, we beelined it to Summer House.

As is the case with most businesses on busy PCH, if you were not looking for it, or if you blinked, you would probably miss Summer House amid the many things that capture your attention driving north on this iconic highway. Summer House occupies the former El Ranchito spot, almost across the street from Sherman Library and Gardens, where PCH intersects with Goldenrod.

Summer House has been here since 2010, which means they must be doing something right to survive in this very competitive restaurant market in this part of town. According to their website, they are a contemporary American restaurant, with a summer vacation home kind of feel to it. I'd say they nailed the vibe they were going for. Even though tables are very close to each other, and the noise on the evening we were there was a little on the loud side, it did kind of feel like we were whisked off on a quick mini-vacay. Since we were at Summer House for restaurant week, it did not take us too long to make our selections off of their $20 three course menu. Let's see how it all worked out for us. 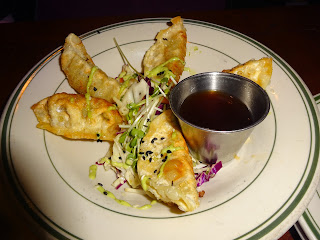 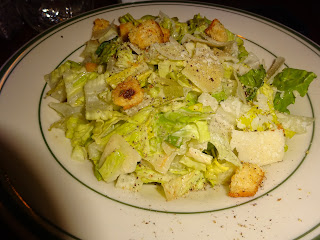 The first course was out pretty quickly and as is our custom while enjoying restaurant week menus, we get different things so we can try each other's choices. Katie went with the Chicken and Vegetable Potstickers ($9.25). These five potstickers came out with an Asian slaw in the middle, a very tiny drizzle of wasabi aioli, and a soy sauce that the menu said had a pineapple tinge to it. The potstickers themselves were nicely done and lacked any discernable grease on them, but more of the wasabi aioli and a more prominent filling would have made these better. I did not really get too much in the way of pineapple in the soy sauce, but soy sauce tends to overpower anyways. I love a Caesar ($4.50), but this one kind of fell flat. It had plenty of squares of parmesan and crunchy croutons, but they needed to have more dressing included on this to keep me interested throughout the life of this salad. Kind of a boring Caesar. 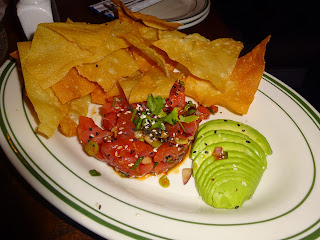 Not on the restaurant week menu, but Katie had heard some good stuff about this Ahi Poke with Wonton Chips ($13.50) and since she is poke fiend, she wanted to give this a try. The fresh ahi tuna is seasoned with sesame seeds and green and red onions and comes with a good amount of sliced avocado. This was an excellent version of poke, clean tasting, not overly seasoned, and went well with the provided avocado and wonton chips. Way better than you can get at most of those build your own poke shops.we frequent way too much. 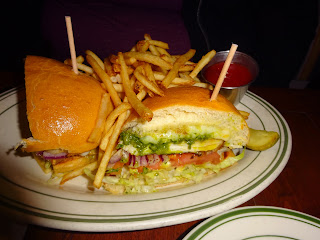 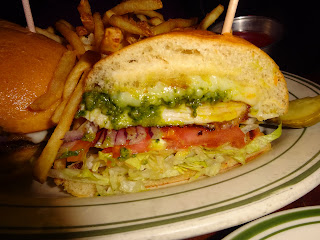 Entrees were up next, and we might as well start with Katie's pick, the Pesto Chicken Sandwich ($13). This sandwich starts with a grilled chicken breast and then is layered with tomato, lettuce, red onion, mayo, mozzarella cheese, and is finished off with a very well done pesto. Katie did not have anything to say about this sandwich negatively. She threw out adjectives like delicious, good, fresh, and crave-worthy when describing this sandwich. She liked the fries but prefers bigger fries that hold more ketchup. 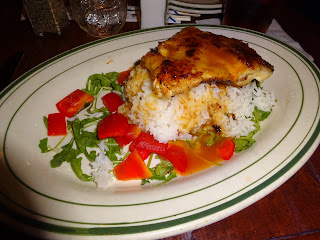 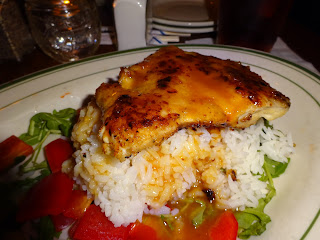 It's probably their signature dish at Summer House, so it was a no-brainer that I had to give their Ginger Crusted Ono ($21) a spin during restaurant week. This baked Hawaiian ono was incredibly light and the ginger was very subtle, which I appreciated. It came with an orange beurre blanc sauce, which I had wished there was a tad more of so I could have had enjoyed it with the jasmine rice and the red bell peppers. A very light, yet satisfying meal. 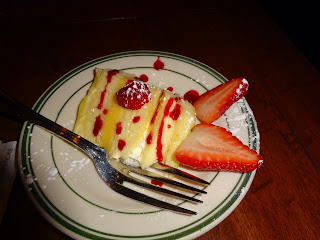 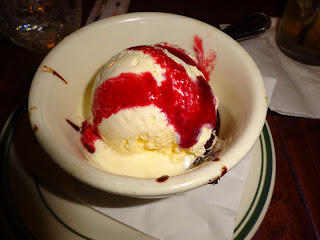 Dessert would be our last stop on the restaurant week menu at Summer House, and Katie tried their seasonal offering which was a Lemon Cake ($5). This lemon cake was accompanied by a strawberry garnish and a strawberry sauce drizzled on top of it. I'm not much into lemon anything, and I thought the lemon was a tad too tart here, and the cake could have been moister. I had high hopes for the Chocolate Heaven ($6) that I had ordered, but it was rather pedestrian. The ratio of flourless brownie souffle cake and ice cream was off by quite a bit. I usually don't complain when there's an overabundance of ice cream, but it really made this flourless cake invisible.

Even with a few less than stellar items on this restaurant week visit, I was pretty pleased with our time at Summer House. I got to try their signature dish, along with plenty from the rest of their menu for the affordable price of $20, which basically means we got the starters and the desserts for free. Not too bad. This visit has gotten me excited to come back here and try one of their good looking burgers, or their weekend breakfast, which gets glowing reviews online. Summer House reminded me of a less polished R and D Kitchen, with a more diverse menu. It was definitely beach casual, and a spot where locals like to come for a low-key dinner. Our server Alison was very friendly and took great care of us during our stay. Wish we could have experienced more restaurant week menus during Newport Beach Restaurant Week, but there's always next year. Just have to get through the dreaded holidays first.

Out of five footballs, (because there used to be a reality TV show on ESPNU which featured college football players living in a house before they got drafted, and it was called Summer House), five being best to zero being worst, Summer House gets 3 solid footballs.

For more information about Summer House, head to their website here: http://www.summerhousecdm.com/index.php
Posted by OCEater at 3:30 PM