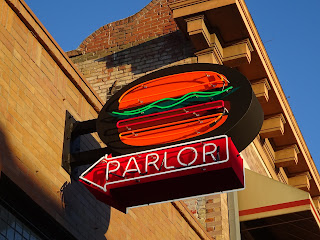 The Plaza, (not the Circle I have learned), has an embarrassment of riches when it comes to restaurants all of a sudden. They have had stalwarts like Haven Gastropub, Gabbi's, Taco Adobe, and Bruxie for a long while now. Then the next wave of spots opened up, Linx, Smoqued, and Pizza Press have set up shop in this area that used to be dominated by antique shops, rather than places to eat. Now there appears to be a third wave hitting this historical district that has been used as a backdrop for a ton of movies and TV shows. The new Watson's, The Pie Hole, and Burger Parlor have opened up in the last few months.

When my parents asked me where they could take me for my birthday, without hesitation, I said they could take Katie and me to the new Burger Parlor in Orange. This is our fourth visit to Burger Parlor, as we first tried them out when they were renting space at Rialto Cafe in Fullerton, and then we made two more visits when they finally moved into their own space, again in Fullerton. You can read about those visits here and here.

Now open in Orange since early April, it seems like they haven't lost a step in their new digs. They have a four and a half star rating with just under a hundred reviews doled out on Yelp. Glowing reviews and accolades are nothing new to Joseph Mahon and his team at Burger Parlor. They have been named best shakes in OC by KCBS Channel 2, they were written up in numerous magazines; Westways, Locale, and Sunset Magazine. They've also gotten glowing reviews from the OC Register, OC Weekly, and the LA Times.

To be truthful, I'm kind of enthralled with Chef/Owner Joseph Mahon's story. He graduated from the prestigious Culinary Institute of America in Hyde Park, New York, and quickly started working in a pretty impressive list of restaurants. He then hightailed it to the south of France to hone his craft even more. After leaving France there were more restaurants to conquer in NYC, and then perhaps missing his native California, he found himself working in some great LA restaurants, all the while moving up the ranks in kitchens, to where he was in charge.

Being the Executive Chef at critically acclaimed, Bastide would in a roundabout way lead him back to his hometown of Fullerton, and opening Burger Parlor. At Bastide he came up with Burger Mondays, and it was such a hit, he decided he was going to shed his fine-dining job and open a burger joint, which would eventually turn into Burger Parlor. I was just hoping that with the addition of a second Burger Parlor location that the quality of my first visit was not going to dip. Let's see what we thought of this new Burger Parlor. 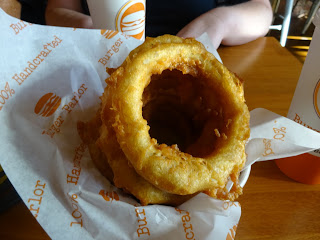 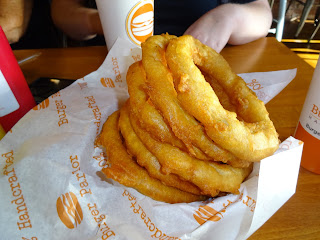 We started things off with two sides, the first of which were these Onion Rings ($4.29). The menu says these are hand-dipped and made to order, and they taste like it. The beer batter breading is lighter than expected and actually clings to the onion ring, which is what I want from onion rings. These circular onions are made even better when dipped into their very well done ranch dressing. Excellent rings. 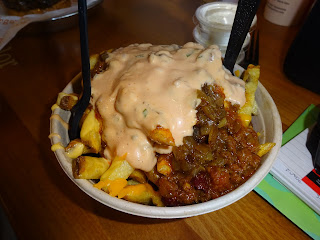 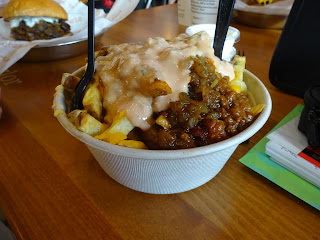 At first glance, these Plaza Fries ($7.95) resemble the weak animal style fries from In-N-Out, but they are so much better. Also known as the DTF Fries at Burger Parlor's Downtown Fullerton location, these freshly cut fries are topped with plenty of their secret sauce, which is reminiscent of a thousand island, cheese, caramelized onions, and chili. It defies science, but the fries stay crisp, even under the weight of the toppings here. The chili is meaty, but kind of devoid of a spiciness, which would bring this up a notch or two in my book. I really liked the sweetness from the onion, which contrasted nicely with the saltiness of the rest of this. I'd get this again for sure. 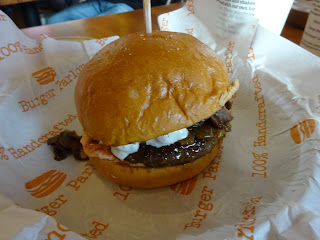 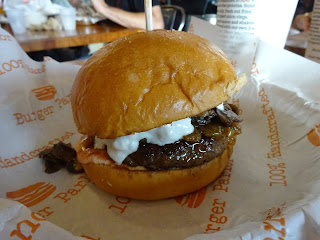 Not the most photogenic of burgers, but my dad did not have one complaint about this Danish Blue Burger ($9.29). Caramelized onion, mushrooms, Danish blue cheese, oven-roasted tomato, and arugula was sandwiched between these two sturdy buns. Big flavors on this one. The blue cheese was pretty pungent on this evening and worked well with everything else here. The beef was still prevalent, and I got the sense that this burger did not need to be overstuffed with toppings to be enjoyable. 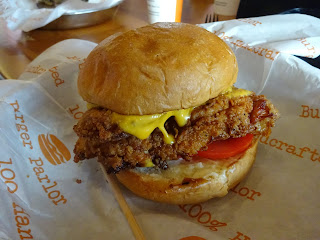 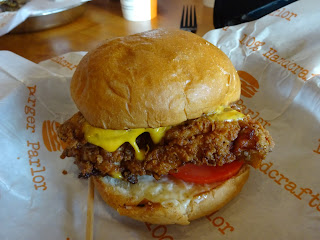 My mom only took down half of this Crispy Chicken Sandwich ($8.89). Not because she didn't like it, she did, but it was much too big for her smaller appetite. This chicken had a nice crunchy outer crust, with tender white meat chicken inside. It was topped with American cheese, bacon, mayo, and tomato. I really enjoyed the bite I had, but if I'm coming to Burger Parlor, I'm more than likely getting a burger here. 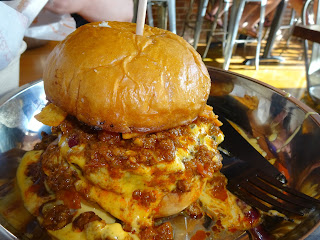 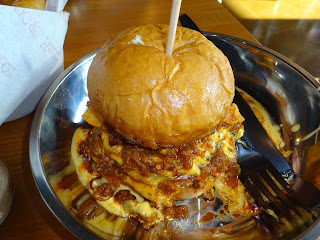 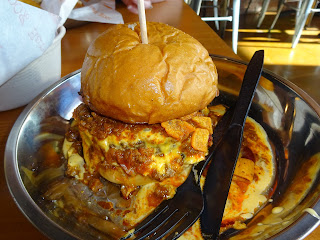 And what a burger I had. Behold the impressive Frito Chili Cheese Burger ($11.49). Their hormone-free beef patty is smothered in chili and cheese sauce, and then topped with chili cheese Frito's and jalapenos. This is definitely a knife and fork burger, and it's even served in a metal bowl. I enjoyed this burger immensely. I'm very anti eating burgers with a knife and fork, but it had to be done here because they did not skimp on the toppings on this one. The chili was the same one used on the fries, and it was solid, but helped out more on this with the addition of the jalapenos. The Frito's added a nice crunch element here but were kind of lost in all of this. A messy burger, but well worth it. 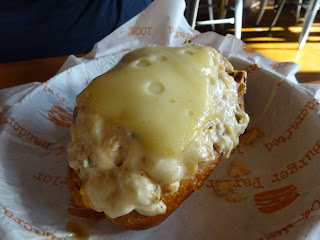 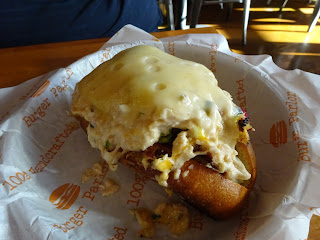 Katie rounded out our time at Burger Parlor with this enormous Tuna Melt ($8.29). Served in a large lobster roll, this was stuffed with their house-made tuna salad, lettuce, Roma tomatoes, and she substituted Swiss cheese instead of the cheddar this usually comes with. Highlights of this sandwich for Katie included the toasted lobster roll, the plentiful Swiss cheese melted on top of this, and the fresh tuna inside. She even claims this might be her go-to item when coming back to Burger Parlor.

I can not hide my excitement that Burger Parlor has moved even closer to me, (okay it's really only twenty or so minutes, but with rush hour traffic that could almost be an hour). This visit to their new Orange location has shown that they have not lost their consistency and reconfirmed that they are one of the top burger restaurants in OC. In fact, since others always ask me, I'll put them in my top three OC spots, along with The Counter and G Burger. Of course, there's always a new burger coming down the pipe, so these rankings are of course subject to change. Burger Parlor has a great feel to it, the food is wonderful, and we experienced great service this evening. With Burger Parlor added to the mix, this might the greatest wave of new restaurants to hit the Plaza in Orange. Time will tell.

Out of five stethoscopes, (because the three largest employers in the city of Orange are all hospitals, UCI, St. Joseph's, and CHOC, and of course these house many stethoscopes hung around doctors necks), five being best to zero being worst, Burger Parlor gets 3.5 stethoscopes.

For more information about Burger Parlor, head to their website here: http://www.burgerparlor.com/