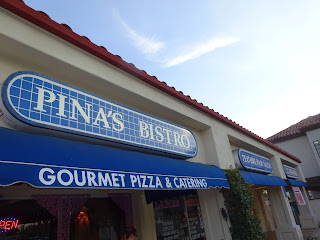 I have had a great hunger for Italian food the last month or so. I crave it almost every time dinner time rolls around. For awhile I couldn't put my finger on the reason for my craving, but then it suddenly came to me, it's because we got streaming TV now. Yes, Katie and I have finally got with it and signed up for Amazon Prime, so we've spent quite a lot of time sitting in front of the TV. The first series we binged watched was the Soprano's. A month later we are just about done with the entire series, and I figured out that this show about Italian mobsters living in New Jersey is the genesis of my Italian food craving. The food they talk about on the show gets my mouth watering almost every episode.

That's basically why I chose to meet my parents at Pina's Bistro in Tustin. Not only is it geographically in the middle of both of us, but I was hoping that eating here would squash my Italian food cravings for at least a night or two. Pina's has been around for twenty years now, and is truly a family run business. Pina's the mother, and her two daughters also work here, helping run the kitchen and waiting tables.

It would probably be wise to think ahead and get reservations when dining here, as the restaurant is not huge by any means. A few walk ins were welcome, but they were very good about holding tables for people with reservations. A simply decorated dining room, they have maybe eight or so tables inside, and a nice patio out front with another four. The menu features items from Pina's homeland of Naples, and this is definitely a scratch kitchen. Everything is made on the premises, and I was very excited to give their stuff a try. Let's see if the food here will help me quench my hunger for Italian food. 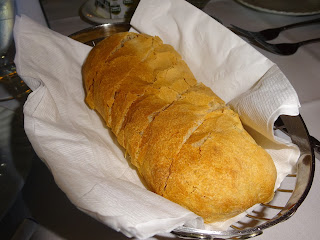 Even the bread served before the meal is made here, and they were very generous replenishing it after we gorged ourselves on it. This bread came out warm, and with plenty of butter. A very simple, rustic bread, it went well with our upcoming appetizer. 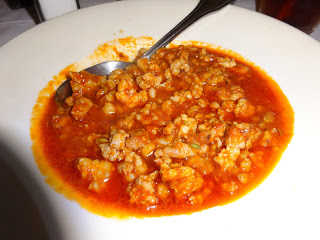 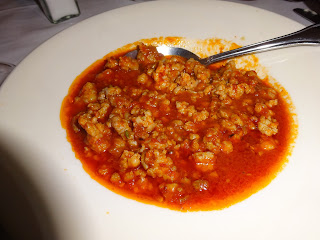 People online were raving about the sausage at Pina's, which is made hand crafted right on the premises, so I had to try the Sauteed Sausage Appetizer ($7.95). This was not what I was expecting, but it was totally delicious. Not a spicy sausage, this loose sausage was bathed in a very nice red sauce which enhanced the flavor of the meat. Spread this on the supplied bread, and you will find yourself in a euphoric state. 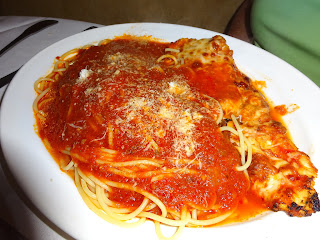 We'll start the entrees off with my mom's selection, the Chicken Parmigiana ($19.95). This is not like the overly breaded version you can get at Maggiano's. This lighter dish came with a lightly breaded, tender chicken breast, plenty of mozzarella, and marinara sauce. My mom enjoyed this dish, and loved the fact that it was not as heavy as others. Along with the side of spaghetti that this came with, she had more than enough to send to work the next day with my dad for his lunch. 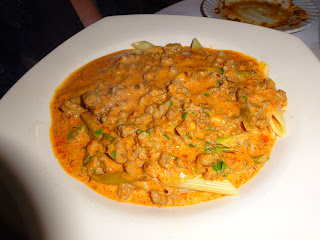 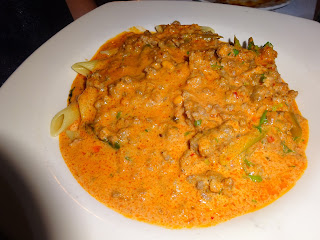 Katie must have really enjoyed the sausage at Pina's, because she also ordered this Penne with Sauteed Sausage and Asparagus ($18.95). This had the same freshly made sausage from the appetizer, but with an excellent aurora sauce engulfing it. I had never heard of aurora sauce before, but learned its a mix between bechamel, cream, and tomato puree, which makes for a wonderful combination. This dish was wonderful, and very comforting to eat. You could feel it coating your insides like a warm blanket, but the freshly made penne kept thing light. Another solid selection from Katie, who's been on quite a roll when we've gone out to eat. 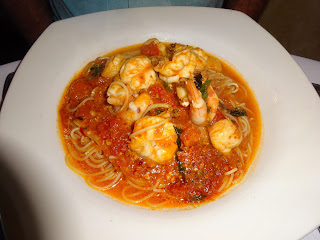 Like I've said before, there used to be a time when I could predict what my dad would order, but those days are long gone now. He went with this Shrimp and Scallop Arrabbiata ($24.95). I usually shy away from seafood in Italian restaurants, just because I love meatballs and sausage so much, but my dad really enjoyed this plate. Even though the scallops were on the small side, there were plenty of shrimp, and the freshly made pasta made this a winner in my dad's book. 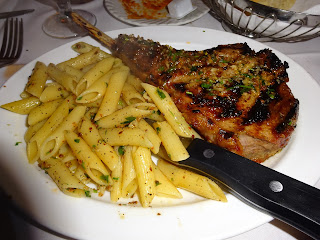 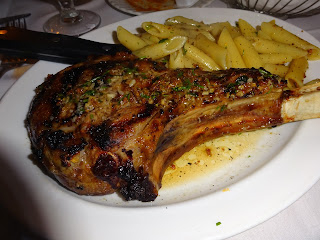 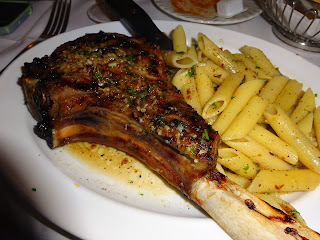 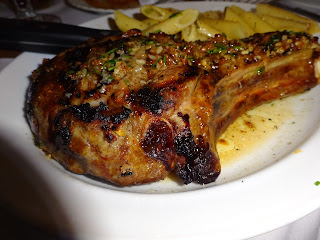 It's been a long while since I have had such a good piece of veal as on this night. In fact, I can't think of a time during the six year run of this blog, when I have written about veal, but this one will be hard to top. Not on their regular menu, but if you see this on the chalkboard displaying their specials, get it. The 16 Ounce Veal Chop Marsala ($39.95) is worth every penny. This veal comes straight to us from New Zealand, and was prepared simply with a little seasoning and garlic, and paired with an equally simple side of penne pasta. This veal was tender, and had tons of meat included here. It took me some time to finish it all, but I eventually conquered it. I was also glad they chose a lighter pasta to go with this, as it would have been too much if they had chosen to include a different sauce. An extremely satisfying meal.

It's safe to say that Pina's Bistro really impressed all of us. For being such a small restaurant, they put out some really delicious dishes. If you are a fan of traditional Italian cuisine, rather than American-Italian food, with its heavier sauces and tons of cheese, you will definitely enjoy Pina's. Yes, you are going to be paying a little more than you are used to for Italian, but the fact that it's all made here by hand is the reason for that, and makes it well worth it. We experienced some wonderful service on this night. A real family atmosphere, where it was like they were welcoming you into their home. The food on this night definitely helped to satisfy my Italian craving, at least for one night. Those same cravings came back the next night when we continued our Soprano's marathon, so a return trip to Pina's is definitely in order again soon.

Out of five carriages, (because the man that Tustin is named for, Columbus Tustin was a carriage maker in Northern California), five being best to zero being worst, Pina's Bistro gets 4 carriages.

For more information about Pina's Bistro, go to their website here: http://www.pinasbistro.com/Home.php