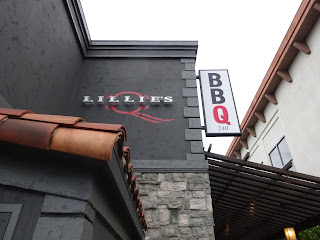 OC has all the sudden become a barbecue mecca. I guess I should say that North OC has become a barbecue mecca. There's not a decent barbecue restaurant south of Irvine, and no matter how many times people tell me that they like Bad to the Bone, we've been three times, and it hasn't been good any of those times. Sorry for the little rant, but I'm tired of having to drive past the 55 Freeway for good barbecue, but that's what we were doing on a recent Sunday evening, when we were meeting my parents at Lillie's Q in Brea.

We have been to Lillie's Q one other time, during a media event right after they had opened. On that afternoon we tried samples of a lot of their stuff, but that only had me wanting more. They've been in business here since the very end of last year, but their other locations, (two in Chicago and one in Florida), are very well received, and from what we hear, are busy all the time.

Lillie's Q is in the old 240 South spot, just a few doors down from Taps Fish House, close to the corner of Imperial and Brea Boulevard. This restaurant landed in Downtown Brea due to a partnership between Joe Manzella of Taps and Lillie's Q head guy, Charlie McKenna. Yes, there is an actual Lillie, and she's the 88 year old grandmother of Charlie, who inspired his passion for southern style cooking at an early age. That passion has been appreciated and rewarded by a lot of people, and the accolades for Lillie's just keep pouring in. They were named best new barbecue restaurant by Food and Wine Magazine in 2011, and have a list of accolades a mile long from Chicago food media outlets. With all this praise I was beyond excited to try them out.

We arrived at Lillie's Q at 5pm on a recent rainy afternoon. The restaurant is very comfortable, with high ceilings, and a comfortable dining area. Not overly crowded at this early dinner hour, there was a steady stream of people that entered during our stay. The first sign that this was going in the right direction was that there was plenty of barbecue sauces on the tables. We had six different sauces to choose from, and I always enjoy when a barbecue spot trusts its customers to add their own sauce to their meats. The sauces were varied, which is also a nice touch. They had a mustard based sauce, hot and mild barbecue sauces, vinegar based sauces, and an interesting Ivory sauce, which they also use as the base for their coleslaw. I was so hungry that before our food arrived, my appetizer plate looked like a painter's palette from trying all of the sauces. Let's see how the food turned out for us. 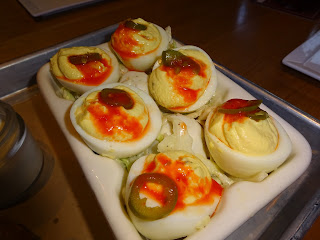 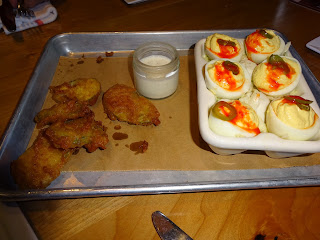 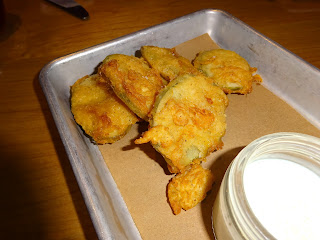 Since we decided to eat dinner so early, we were able to take advantage of the happy hour specials, which are even offered in the dining room, and not just the bar area. I was a little disappointed in the serving size of the Fried Pickles ($3) until I saw that they were only three dollars. These came five to an order, and were so good, that we splurged and spent another three dollars on another order. Way better than anything you can get at Lucille's or any other place you can think of that serves fried pickles. These sliced pickles were breaded in a beer batter, and served with some ranch. My parents declared these some of the best they have ever had, and I'd have to agree. Even better than ones my brother in law makes. Sorry Jarrod. We also tried an order of the Deviled Eggs ($3), which came with a more reasonable six to an order. Deviled eggs are not really my scene, but Katie and my parents really enjoyed these. They were a classic deviled egg, with some hot sauce and a jalapeno ring on top. I tried a bite, and thought they were okay, but I'm not too good of a judge of deviled eggs. I did like the coleslaw they had laid out as garnish for the eggs. It had a good moisture to it, and the dressing was on point. Happy hour prices here are a pretty good value. 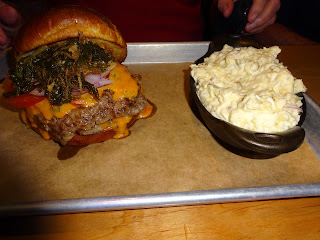 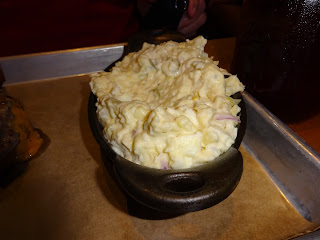 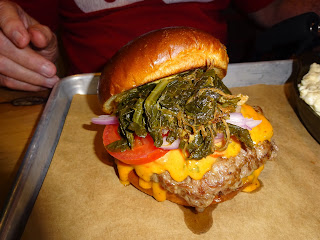 Thanks for the great hand modeling dad. Anyways, my dad's streak of getting burgers in barbecue restaurants has now reached four straight times, when he ordered this Q Burger ($15). This burger must be a new item, because it does not appear on any of their online menus, but my dad was pretty excited they have it on their menu now. This burger was delicious and juicy. It came with cheese, red onion, tomato, and some very good collard greens. One of the better burgers we have had in awhile, but the bun had a hard time keeping everything together. It gave a valiant effort, but in the end the juiciness of the burger, combined with the moisture from the cheese and greens proved to be too much, and we had to use a fork to finish it off. With his burger my dad selected Potato Salad as his side. Another item that is not on their online menu. This potato salad was creamy, but still had chunk to it. Good flavor, and the portion size was very generous. 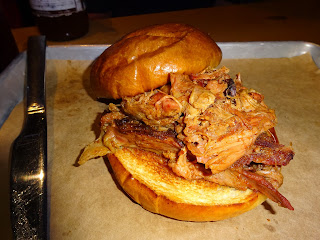 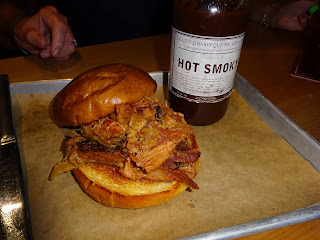 If my dad has become predictable about his order at a barbecue restaurant, then you could set your watch to what my mom always gets, and again she failed to deviate from her standard order of a Pulled Pork Sandwich ($8) on this night. She ordered this sandwich ala carte, and was very pleased with it. There was plenty of pork piled on here, and she was a big fan of the Hot Smoky barbecue sauce. The pork was very tender, with a hint of smoke, which allowed the natural flavor of the swine to come through. She managed to eat half of this, and I had the other half for lunch the next day, and it was still good. 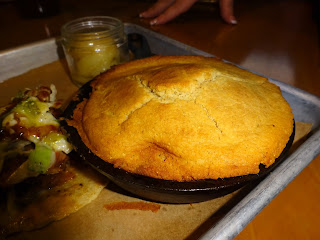 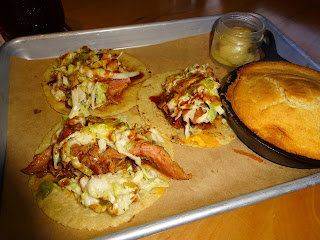 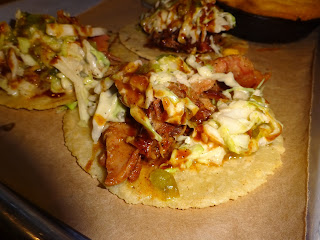 Another usual order for Katie, is getting tacos in a barbecue restaurant. She's done this before, with varying success. On this night at Lillie"s Q she couldn't have been happier with these Memphis Tacos ($15). These were three street taco sized tacos, and came with smoked pork, salsa verde, coleslaw, and the hot smoky barbecue sauce, all on a house made corn tortilla. She loved the way that the flavors melded together here. The salsa went well with the smoky pork, and the coleslaw added a nice texture element. The only blight on this plate was her side item choice, the Cornbread. One of the worst we have had. It came out way overcooked, was not moist at all, and burnt badly on the edges. It was served with honey butter, but even that could not save this side item. 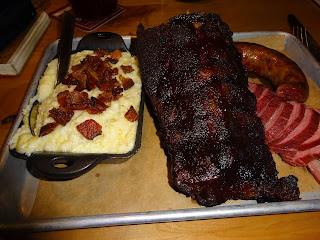 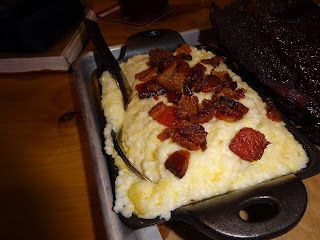 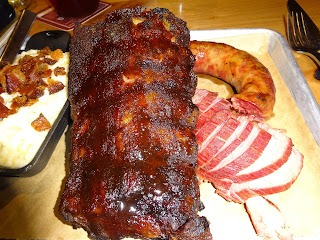 Not to give too much away, but I still dream about this plate of food, even a few weeks after being at Lillie's Q. As is my custom when eating in a barbecue restaurant for the first time, I always gravitate towards a combo meal, and at Lillie's Q, that means I had to get the Taste of LQ ($27). My first choice of meat, brisket was not available, even at this early dinner hour. Bummer. I instead went with baby back ribs, tri-tip, and their hot link. These meats were all really good. Just the right amount of smoke for my taste. I like the smokiness to accentuate the meat, not overpower it. This was accomplished here at Lillie's Q. The ribs were tender, with plenty of meat on them. The tri-tip had a great smoke ring embossed on it, and was moist. You could tell that the sausage was made here, and it might not be for all of you, but I liked the almost grittiness of the meaty sausage. Almost overshadowing the meats, was my choice for a side item, the Stone Ground Grits, which were topped with bacon. If there are better grits available in OC, we have not had them yet. Buttery, and a velvety smooth texture will have me getting these on every return visit here. A very satisfying meal. 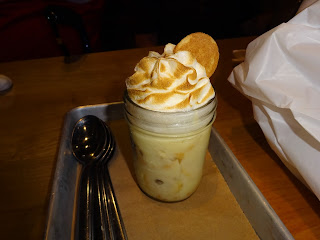 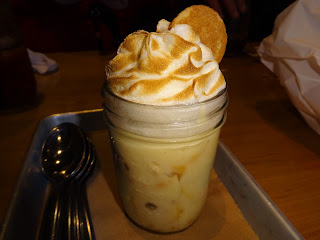 Even though we were all pretty stuffed from the great food here, we could not resist splitting this Banana Pudding ($5). This mason jar was filled with pudding, bananas, whipped cream, and Nilla wafers. This dessert was just like you remember. It could have used a little more Nilla Wafers, but it was a light end to our heavy meal. I really enjoyed the smooth pudding, and the light whipped cream in this.

I guess if you've read this much of this review, you know that we were all pretty impressed with Lillie's Q. You can safely add this restaurant to your list of some of the best barbecue in our great county. The meats were all pretty stellar here, and most of the sides were equally as great. A few people have squawked online that they thought their prices were a little on the high side, but I'd gladly pay a little extra for barbecue of this high standard. I'm not ready to anoint this as the best barbecue in all the land, because there's more that I want to try, but it's definitely in the upper echelon. We experienced good, non-intrusive service on this night. Glad to add another barbecue gem to our list in OC, just wish we could add one that's closer to where we live, south of Irvine. Someday it'll happen.

Out of five snowmen, (not only does this restaurant have its roots in Chicago, a city that has its fair share of snow, but one of the largest glaciers in Antarctica is named Lillie, and that could provide enough snow for a few snowmen), five being best to zero being worst, Lillie's Q gets 4 snowmen.

For more information about Lillie's Q, go to their website here: http://www.lilliesq.com/restaurants/