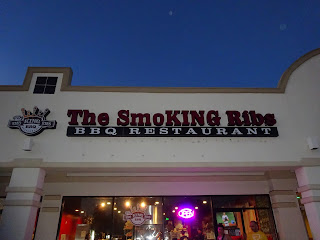 When I told people I would be heading to Garden Grove for dinner, most just assumed I'd be having Vietnamese, Mexican, Korean, or trying one of those Cajun seafood spots where you get the whole shebang. I got a bunch of double takes when I told them I'd be getting barbecue, and I had heard great things about the restaurant we were headed to. My Instagram feed has been filled with mouth watering pictures of the meats here, their Yelp page is filled with lots of positive reviews and five-star ratings, and I have read some really good things in the press, so it was just a matter of time until we made it to The SmoKING Ribs.

The man behind this restaurant is Kenny Tran, who used to love grilling in his backyard, but found it to be pretty labor intensive, with all the flipping and making sure things were not getting too overdone. He found that he did not have enough time to enjoy a beer while grilling, so he started out smoking a chicken, which gave him plenty of time to enjoy a beer or two while the meat was in the smoker, and that's how he got his start as a barbecue master.

That was 1999, and in 2010 he started his own barbecue catering company, Bolsa Barbeque. They still do a lot of catering, but this was the springboard for his first and only brick and mortar restaurant. The SmoKING Ribs is the first restaurant Kenny Tran has ever worked at, and he's jumped in with both feet since he's the owner, pit master, and almost every other job you can think of in a restaurant.

The location of this barbecue restaurant is a little odd, in the same sleepy shopping center as a Vietnamese coffee shop, a pharmacy, and a nail salon, and next to the more bustling strip mall that houses the ever-popular Boiling Crab, which always seems to have a long line out the door. We arrived here at 5 pm on a recent Saturday to meet our good friends Duc and Minerva, who pen one of the most enjoyable reads, Much Ado About Fooding. At this early dinner hour, it was no problem getting a table right away, but we've heard that this small, ten table eatery does get packed, so be advised of that.

The menu at SmoKING Ribs is pretty compact, but all the essentials are here. They offer six kinds of meat, a couple sandwiches, nine sides, and five starters, which are half price during their happy hour, which runs weekdays, from 2 to 5:30. I was a little disappointed that there are no combo meals offered here, as that's usually what I like to order to get a good lay of the land when eating at a place for the first time. Fortunately for us, there were four of us in our party, and we coordinated what all of us would be having, so we got a good cross-section of the menu. Let's see if this restaurant is worth all of the hype it has been generating. 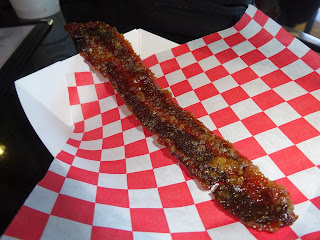 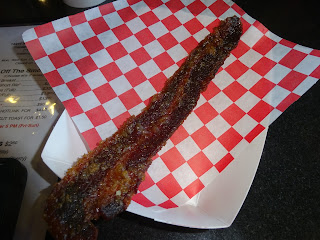 Since we were waiting for Minerva and Duc to arrive, because they were running a little late, Katie and I decided to order their much ballyhooed Candied Bacon ($2) to start off with. I've heard this runs out pretty early, so I was pretty eager to give it a try. I thought it was good, but I kind of missed the smokey flavor of regular bacon, since this was way more on the sweeter side. Different, but not something I would probably get again. 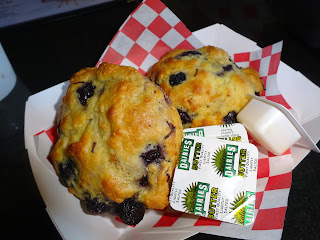 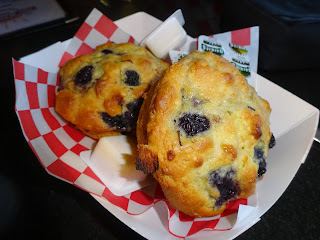 I guess we were really hungry while waiting for Minerva and Duc because we also tried their Blueberry Cornbread ($4), which is also one of the choices that you can pick for your side items with an entree. I would definitely get this again. Part muffin, part cornbread, and totally delicious. This was like the best of a blueberry muffin and cornbread all in one. Plenty of blueberries in this, and not too crumbly, like a lot of cornbread tends to be. I did wish that the butter was a little softer so it could spread more evenly, but other than that, this was a very good side and made me eager to see what else was in store for us this evening. 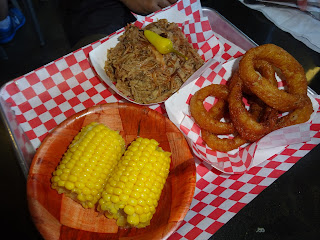 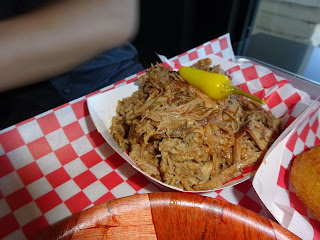 Our food started making its way out to us in waves, the first of which was Minerva's selection on this early evening, the Pulled Pork ($13). This mound of shredded pork came with two sides, and she went with Corn on the Cob and Onion Rings. Minerva liked the pork, but since she went to school in North Carolina, she's used to the real deal barbecue, and she stated that this was good for OC barbecue, but not like anything she's had back east. She said it was a little too mushy, but I liked the pieces I tried off of her plate. I left the corn on the cob alone, but the onion rings were fantastic. Very crunchy breading, well fried, and the onion on the inside was prominent. I think these are one of my favorite onion rings around OC. 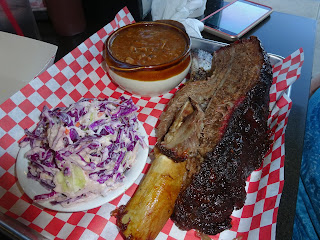 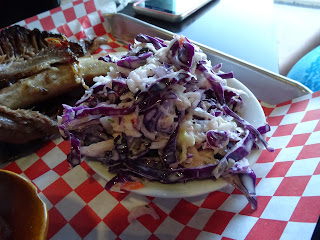 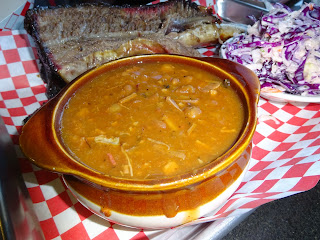 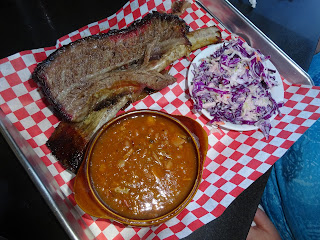 When Katie's dinner hit the table, there was an audible gasp of excitement. This Angus Short Rib ($24) is only available Friday through Sunday after 5 pm and is made in a limited supply, so get here early enough to make sure they don't run out before you get yours. Short rib is always tender, and that was definitely the case here. I liked the understated amount of smokiness that attached itself to the beef on this evening. This good sized rib had a nice ribbon of fat running through it, which also helped boost its flavor profile. For her side items, Katie went with the Smoked Beans and Coleslaw, which were both winners. The beans were more soup like, than baked beans, which I thought I was not going to enjoy, but they turned out to have plenty of beef in them, and a great depth of flavor. The coleslaw had a great crunchy texture to the red cabbage used, and was liberally dressed, just the way I like it. Another winner of a plate. 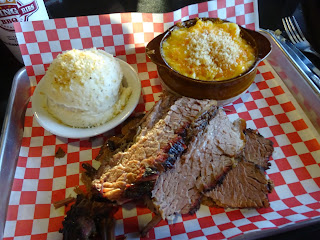 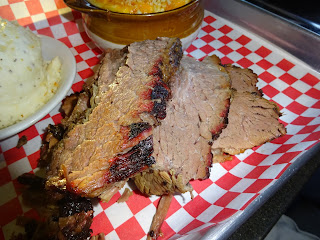 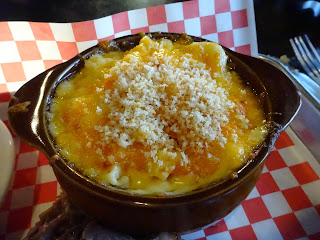 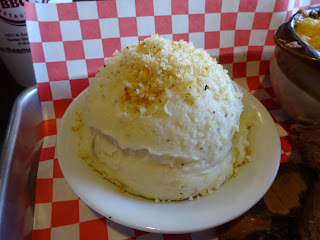 The hits just kept on coming at SmoKING Ribs, with my plate, the Angus Beef Brisket ($21). I really enjoyed the brisket, but a few pieces were a little on the dry side, but for the most part, this was solid beef. I really enjoyed the barbecue sauce that they offer here. They have a sweet sauce, but the one that got me humming was their habanero sauce, which really packed a punch, without overwhelming the meat. My table mates thought it was a little too hot, but that was rectified by mixing it with the sweeter sauce. Really kicked this brisket up a few notches. The side items I chose rocked. The Mac and Cheese had the right consistency of noodles to cheese, and I liked the inclusion of the bread crumbs on top of this, which added a little texture. The Mashed Potatoes were a good, solid version of this classic side dish, which was not too lumpy or runny. 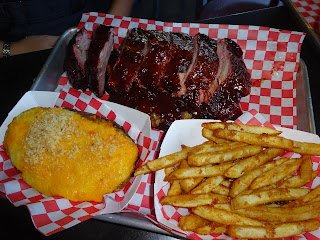 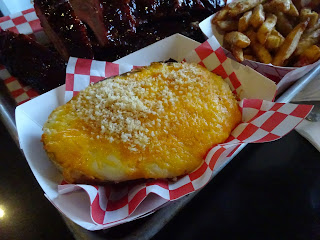 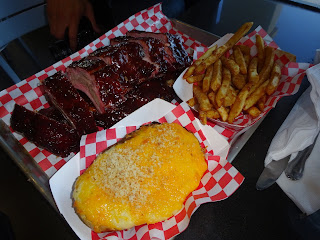 You can't come to a place called the SmoKING Ribs and not get ribs, so here's a shot of the Pork Ribs ($30). Besides the short rib, this was my favorite meat item of the night. The ribs were tender, had a great reddish hue from the smoke ring around the outside of them, and came with a slight glaze of barbecue sauce, which caramelized on the smoker. The two side items chosen with this plate were the French Fries and the Twice Baked Potato. I did not get a chance to give the potato a try, but it looked real good from across the table. The fries were done well here, with a crispy outer shell, and soft potato inside. 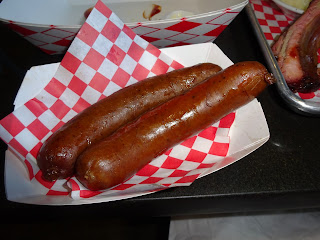 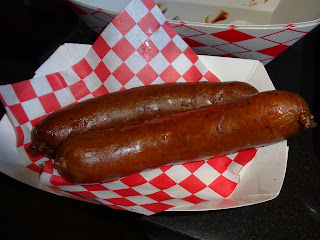 Both Katie and I added a Hot Link ($2) to our meals. This tube of meat had a nice slow burn to it, and  I liked the snap of the casing, along with the sausage on the inside. Well worth the extra two dollars, and this went well with the provided barbecue sauce.

I left SmoKING Ribs pretty impressed, and now understand why this restaurant gets so much positive press. So where does this restaurant rank in the hierarchy of barbecue restaurants in OC? It's pretty high up there in my opinion, with only Lillie' Q, Blake's Place, Smokey Fred's and Leadbelly's being better, but of course, these rankings can change based on my next visit to any one of these spots. I do wish they offered combo plates here, as it would help make my decision on what to eat here next much easier. There were some very minor hiccups with the meats here, but the side items were all pretty stellar. Some might feel that the prices are a little on the high side, but you'll definitely have leftovers, so if you think about it like you're paying for two meals, it makes it much more manageable. The service on this evening was pretty good, and they definitely got busier as the night went on. With the addition of the SmoKING Rib, people might start thinking about the city of Garden Grove as a barbecue destination.

Out of five strawberries, (because I always think of this fruit whenever I'm in this area since they hold the Strawberry Festival here every Memorial Day Weekend), five being best to zero being worst, The SmoKING Ribs gets 3.5 strawberries.

For more information about The SmoKING Ribs, head to their website here: http://thesmokingribs.com/
Posted by OCEater at 5:45 PM