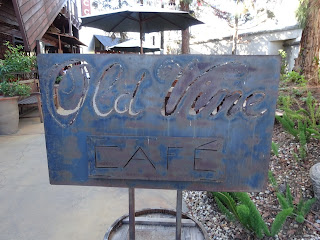 Brunch is a magical time. Some might even argue that it's the best time of the week. A time to gather your thoughts about what you have going on in the upcoming seven days. A chance to maybe even reflect on the past week, and maybe even rethink your decision to have that extra gin and tonic the night before. For me, brunch is a good time for all these, but mostly it's a great time to combine breakfast and lunch foods together, and being a fan of sweet and savory in the morning hours, this is definitely a meal I'm always excited for.

A place I have followed forever on Instagram, and a restaurant that most of my food friends have been to many times over, is Old Vine Cafe. I have salivated from afar over their hunger-inducing photos online.  They have gotten some great press, have very favorable ratings on Yelp, and their dinners look amazing. We got up bright and early for brunch, as I heard this small restaurant gets very busy and wait times can be pretty long.

Getting to The Camp at 9:30 AM, where OVC is located, marks the first time I have not had any problem finding a parking spot at this popular shopping center. Of course, when we were leaving an hour later we saw numerous cars circling the lot for that elusive open space. Once parked at The Camp, head to the back of this retail center, past Taco Asylum and East Borough, and you will eventually run into this wooded area, which almost immediately transports you to a place more reminiscent of the Northwest, instead of Costa Mesa.

Old Vine is brought to the good people of OC by Chef Mark McDonald, who not only helms the kitchen here but is also the owner and wine director. A graduate of Laguna Culinary Arts, he also holds the lofty title of California Director for Aregala & Cooks Without Borders and he also partners with the Italian Culinary Institue to lead their Splendors of South Italy and Splendors of North Italy culinary trips every year. A busy man, who also takes great care of Old Vine, which is celebrating its 10-year anniversary this year, which is a big accomplishment in the restaurant industry. After being seated right away, Old Vine filled up quickly with hungry customers, so Katie and I made our selections rather quick, and this is how it all came out for us. 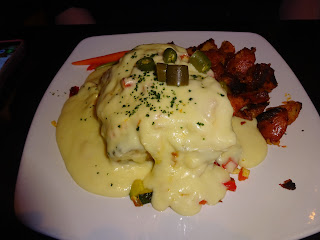 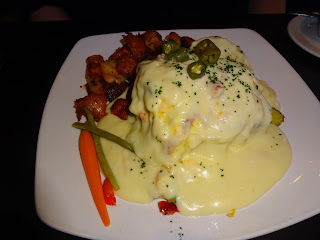 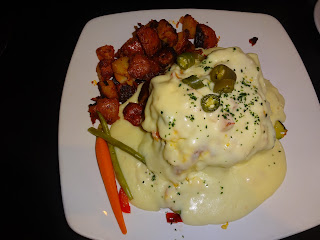 Up first was Katie's entree, the Southern Brunch ($16) which was made up of two eggs, a freshly made biscuit drenched with pancetta gravy, scrapple, and a panko-crusted fried green tomato. When this was placed in front of her, she was a little intimidated by the sheer size of this. It was massive. The focal point of this plate was the great tasting gravy and biscuit, which melted away wonderfully when consumed. This was one of the better gravies we have had. Rich and creamy, but not overpowering the rest of the plate. We were not sure what scrapple was but learned that it's a pork product which is combined wth cornmeal and flour and then fried to create a kind pork loaf. I'd actually like to try it as a sandwich, which I think would be delicious. In honesty, the eggs did get a little lost here, but with all of this deliciousness, it was not a big deal. Katie boxed up half of this and had it for dinner the same evening. It held up then too. 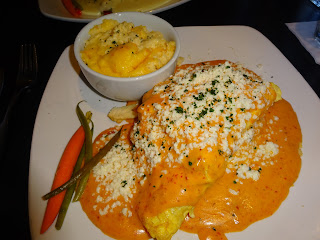 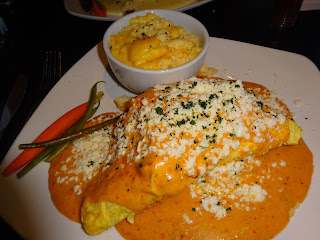 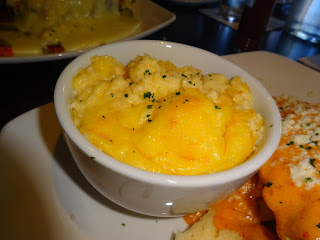 Man, I had a rough time making a decision here, but I finally decided on this Open Faced ($15.85). After my first bite, I knew I made the right choice. Amazing is how I would describe this plate. This was basically an omelet with a biscuit inside of it, along with plenty of chicken sausage and then topped with chipotle gravy and queso fresco. The gravy on this one was just as good as the version used on the southern brunch, but even better because it really had a spicy kick to it. A biscuit inside an omelet was a genius idea and the omelet itself was done perfectly. I subbed out the potatoes for the Cheesy Grits for an extra $2.50. Best two and a half dollars I have spent in awhile. These cheesy grits have dethroned my favorites at the temporarily closed Lillie's Q in Brea as the best I have had in OC. A great meal to start off my day. 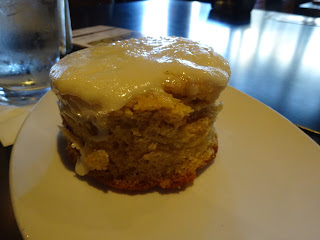 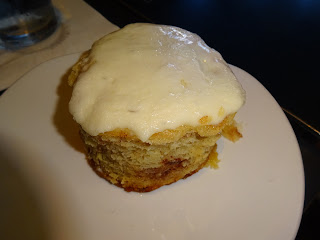 We were expecting this Cinnamon Roll ($5.25) to come out before our meal, but it came with our entrees. As time wore on this cinnamon roll kind of grew on me. At first, I was kind of put off by the fact that the icing was not as prominent as I would have liked, and it was not as sweet as I thought it should be. Because I was not distracted by sweetness with this cinnamon roll, it allowed the buttery roll to shine. Still not my favorite cinnamon roll I have had, but very formidable. 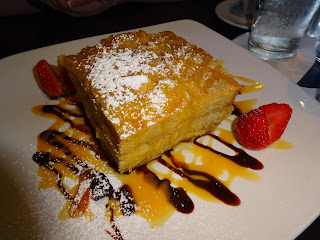 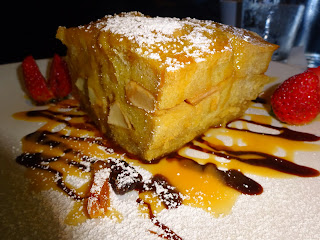 Katie and I could not come to an agreement on this Baked Caramel Apple French Toast ($15). She loved it, and I was a little more tempered in my assessment of this almost dessert dish at Old Vine Cafe. Two pieces of apple french toast are drizzled with caramel and chocolate to make up this dish. I thought the bread portion of this resembled a less moist bread pudding, which kind of bored me. I would have liked some extra moisture and sweetness here to add some excitement to this. Katie meanwhile loved this, and she happily finished this off for us.

Even with the miss on the french toast, Old Vine really impressed. Chef Mark has done something here which is hard to do for a lot of brunch spots, make brunch their own. The creativity and big time flavors really made our morning, and we have thought back over this brunch many times since coming here  This is definitely a brunch spot that we want to explore more. The rabbit mole, Reuben omelet, and peanut butter and banana crepe are on my list of things to try on out on our next visit to OVC. Service here was warm and friendly, even at this early morning hour. They really did try to turn over tables quickly, to help alleviate the wait times, but we did not feel rushed in the least. You can definitely move Old Vine Cafe to one of the top spots to experience brunch in OC. Whatever your reason for loving brunch, you will like it even more after eating at Old Vine Cafe.

Out of five dragons, (because this is the official animal for the country of Armenia, which also happens to be home to the first winery in existence, dating from around 4,000 BC), five being best to zero being worst, Old Vine Cafe gets 4 dragons.

For more information about Old Vine Cafe, check out their website here: http://www.oldvinecafe.com/
Posted by OCEater at 5:58 PM