Making Hogs of Ourselves at Brew Hawg 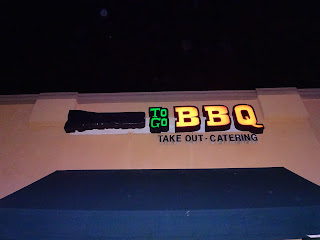 Finally getting around to seeing some of our friends we haven't seen in awhile. We met up with my good friend Kevin and his much better half, Denise recently. Seeing our friends is always a good excuse to try out a restaurant that has been on my restaurant wish list for a good amount of time. On this evening, we were able to cross Brew Hawg off that ever-growing list.

I'm always down to try barbecue and had heard some really good things about this place. Based on the name of this restaurant I had thought this was going to be a barbecue restaurant with an emphasis on beer, but the brew that is in their name is in reference to root beer, which is partially brewed on the premises of this small three table restaurant. There is some talk of Brew Hawg moving in the near future, to a bigger place and maybe even getting a liquor license, or at least a license to serve beer and wine.  For now, look for them near the intersection of Mayfair and Tustin, in a non-descript shopping center which features a Japanese restaurant, a Tae Kwon-Do studio, and a dentist.

We got here at 7 pm on a recent Saturday and were kind of taken aback by this small restaurant which had a steady stream of customers, most of which were getting orders to go, instead of waiting for a table to open up. I'm not going to lie, this is a pretty uncomfortable spot, which is small and tight with people hoping to snag a seat and waiting for their to-go orders. We got lucky and got a table when the person sitting at it had their number called that their food was ready.

Ordering is done at the counter, and then the food is brought out to you in to go containers, even if you are eating it here. The menu features plenty of favorite barbecue items, and a couple of odd items for a standard barbecue restaurant, (pastrami, BBQ Waffle Cone, and a vegan option that I did not inquire about). Brew Hawg offers their meats in a number of ways, including a combo plate, by the pound, as a sandwich, or featured as a bowl with mac and cheese or another side item. We quickly made our choices and waited at our coveted table. Here's how it all came out for us on this particular evening. 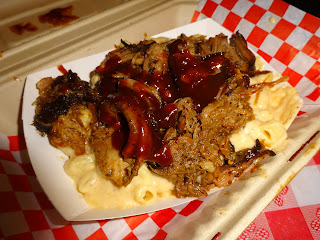 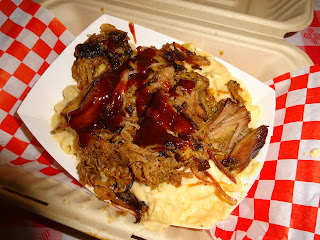 Since Kevin and Denise were running a little late due to to a family birthday party, and we didn't want to sit at one of the tables without eating, we started off with this Mac Daddy ($7.75). We chose the pulled pork to go along with the mac and cheese, but you do get your choice of meat with this. The mac and cheese had a good consistency to it, but the cheese could have provided a little more flavor on this. The pulled pork made up for the average mac and cheese. It was tender, had a good flavor to it, and was one of the better versions of pulled pork we have had in some time. It really got me excited for the meats at Brew Hawg. 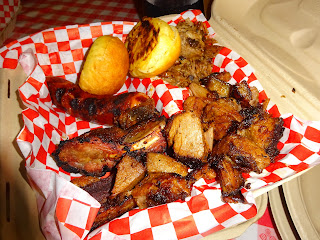 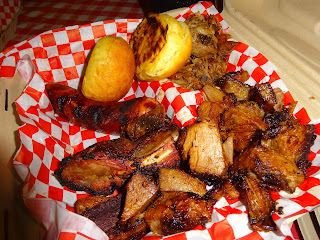 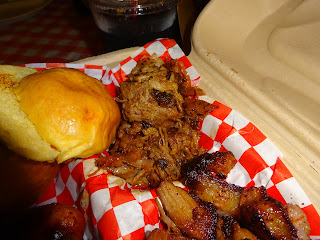 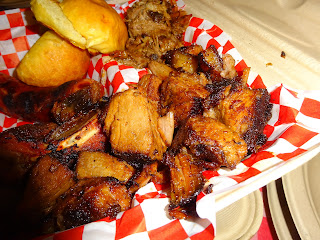 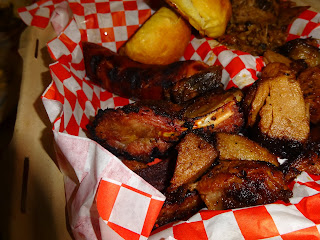 As is my custom during my first visit to a barbecue restaurant, I always search for the biggest combo plate available and at Brew Hawg that would be the Purgatory ($24.75), which Katie and I split between us. This comes with four choices of meat and four sides. For our meats, we went wth the aforementioned Pulled Pork, Hot Link, Baby Back Ribs, and Brisket. The best of the bunch was the pork, which was moist enough, but still had the firmness that you want from a good pulled pork. I liked the crispy bits that were included with this excellent swine. The silver medal of this plate would definitely go to the brisket, which came out chopped. Some really solid bites were included here, but there were some pieces that were a little drier than others, but that was easily rectified by adding a little extra sauce. The baby back ribs were okay, but again, some tough meat here and not a lot of it on each rib. I've decided that I'm kind of over baby back ribs, and will focus more on St. Louis ribs in the future. I think the extra fat gives off way more flavor, but that's just my preference. Back to this plate, the hot link was probably the weakest link of this meal. The sausage provided no heat and was pretty pedestrian. I'd skip it next time. When this was placed in front of us, I thought it was too small for the price, but it ended up being just the right size for both Katie and me to share, and we still had the sides to go. 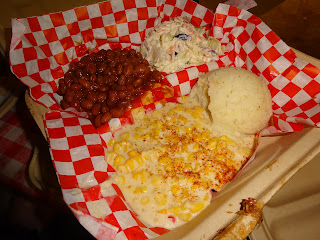 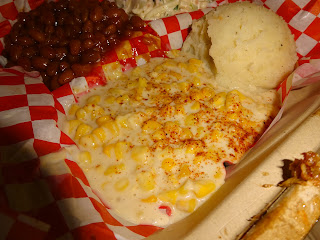 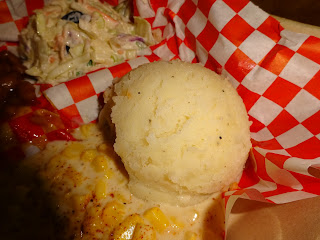 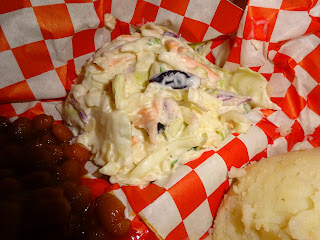 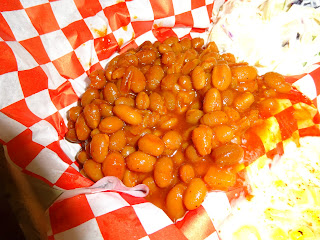 The Brew Hawg menu lists eight side items, and with our meal, we got to try half of them. The lone standout here was the Coconut Creamed Corn. It had a good sweetness to it, without beeing too in your face. The slight coconut flavor definitely kept us interested. I liked the Peanut Slaw with its creamy dressing, but a few more peanuts in here would have given this a better texture profile. The Baked Beans were good but could have been pushed up a notch or two with some little shards of meat included in them. The Garlic Mash was decent but very light on the garlic and could have been a bit more creamy. With the exception of the corn, none of these really wowed us, but none were awful either. 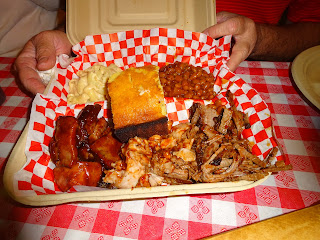 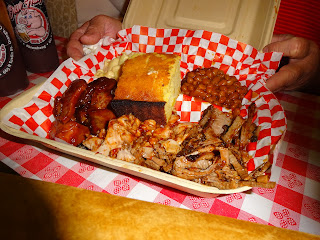 Here's a quick shot of Kevin and Denise's dinner, the BBQ Damnation ($19.75). With this one, you get your choice of three types of meat and two sides. They went the Pulled Chicken, Brisket, and Tri-Tip route with their dinner choices. I did not try the chicken, but I did try the tri-tip and it was very good. For sides they had the Baked Beans and the Mac and Cheese, which they both seemed to really like. 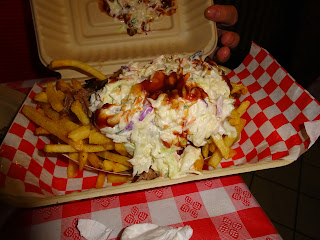 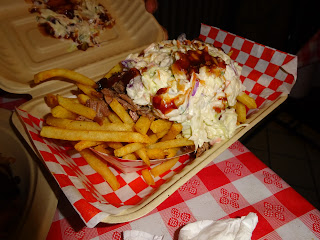 As if Kevin did not have enough food, he also got these Porky Fries ($7.75), which he shared with us. They take their fries and top them with coleslaw, pulled pork, and a squirt of barbecue sauce. Whenever I have something like this, I'm always a little leery that the fries are going to become soggy which they didn't here. The fries were seasoned nicely and went well with the coleslaw and pulled pork. Kind of a down home poutine. Even though this could have been layered a lot better to allow more bites with everything included here, I kind of liked this better than the mac daddy we had earlier. 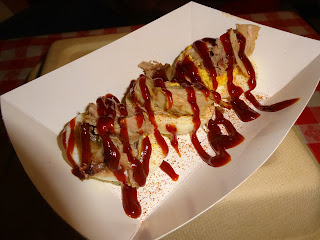 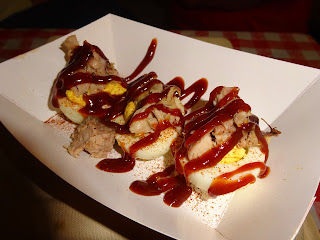 Near the end of our meal, and the end of the dinner rush, we had a chance to chat with Brew Hawg Owner Leo Martinez, who trotted out these Hawg Eggs ($6.75). These usually come five to an order, but we had just finished a big meal, and three worked out perfectly for us. I'm not really a big hard boiled egg fan but ate these with pleasure since they had that very good pork and barbecue sauce drizzled over them. 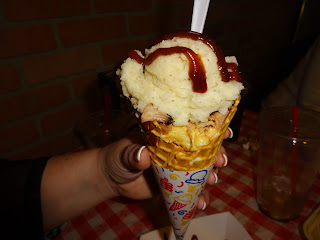 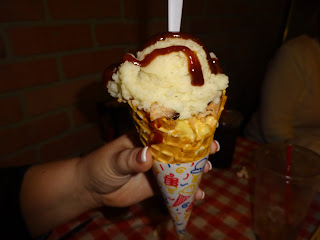 There's definitely a new trend going on in the restaurant world, and it's coming up with food that will look good, different, or generate buzz on social media sites such as Instagram and SnapChat. At Brew Hawg they have their own version of this, the Filled BBQ Waffle Cone ($4.75). The cone is layered with mac and cheese, then your choice of meat, and is finished off with garlic mash and a drizzle of barbecue sauce. This was fine, but a little difficult to eat. I actually liked the textural crunch that the waffle cone added to this. Leo said that since this has gone a little crazy on Instagram, they have gotten more business. Not hard to believe.

I had mixed feelings about Brew Hawg. I really liked their meats, especially their pulled pork and their brisket. I'll definitely try the pastrami and pork belly on my next visit. As for the sides, none really wowed me, with the exception of the coconut creamed corn. I do admire what they are doing here in this very tight space. Since the restaurant is so cramped, I can only imagine that the kitchen is the same. It'll be interesting to see how they develop after they move to bigger digs, which I'm sure they will do very soon. Just chatting with Leo for a few minutes, I could see the passion that he has for barbecue and that he wants to be mentioned in the upper echelon of barbecue in OC. He's just about there.

Out of five motorcycles, (because a hawg is a slang term for a Harley Davidson bike), five being best to zero being worst, Brew Hawg BBQ gets 3 motorcycles.

For more information about Brew Hawg, head over to their very limited website here: http://www.brewhawg.com/
Posted by OCEater at 8:33 PM