Anniversary Dinner at the New Steakhouse in Town 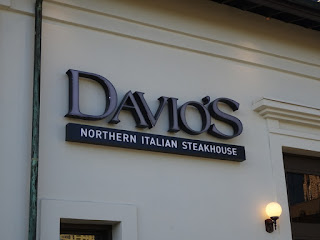 They said it would never last. The odds were stacked against two young kids who met online, had never had much luck in love, and never dreamed that either of them would have any chance to get married. But we showed them on April 18th, as Katie and I celebrated our fourth year as man and wife.

Okay, to be honest, no one ever really said that we had no shot at wedded bliss. As soon as we started dating each other six years prior to our wedding, we were never apart. Our friends and family instantly saw our chemistry and knew we belonged together. She was just what I needed, and I was what she needed. A perfect match if there ever was one, and we never thought it would happen for us.

Alright, you did not come here to read about some mediocre love story, you want to know about our thoughts on another OC restaurant. We got you. Since it was our anniversary, and it coincided with the arrival of our copy of Orange Coast Magazine being delivered, and their cover story this month just happened to be about the best new restaurants in OC, I let Katie choose one of them for us to try. After a little bit of debate, she chose to celebrate our anniversary at Davio's in Irvine.

Davio's Northen Italian Steakhouse comes to us from the East Coast, or Boston specifically. This ten unit restaurant chain got its start back in 1985 when Steve DiFillippo purchased a family restaurant named Davio's in Boston's Back Bay area. After some tweaking to the menu, wine list, and other touches, Davio's soon became a hit with critics and guests alike. Their philosophy was to make everything from scratch, with the finest ingredients possible, and then feature a polished and attentive front of the house staff.

In October of last year, Davio's moved west to open in the former Prego spot, right next to the Irvine Towers in Irvine. The team includes General Manager Michael DiFillippo, son of owner Steve, and Executive Chef Istvan Toth, who is Hungarian born and raised, worked in some of New York's busiest kitchens and has been with Davio's since 2013. I was intrigued to find out what Davio's was all about on this evening.

We arrived here ten minutes before our half past six reservation time and were seated in the half-empty dining room. The layout of this restaurant is pretty much the same as when it was Prego, with ample spacing between tables, an open kitchen where you can spy the kitchen staff manning the grill and preparing plates of pasta, and a couple of private dining areas which can be requested by guests. It does appear that they lightened things up a bit by adding some white paint to the walls, to go along with the white table cloths and linens.

The two-page menu features a wide selection of items, some you would expect from a steakhouse others you wouldn't.  They offer ala carte steaks and seafood, fifteen sides meant for sharing, a handful of salad options and a seafood tower for however many people you have dining with you. What I didn't expect to see were so many options in the way of pasta dishes, which can also be ordered as an appetizer, dinners that come with sides, (almost unheard of these days in a steak restaurant), and a grouping of spring rolls, which are really more in the way of an egg roll, rather than what you'd find in Garden Grove's great Vietnamese restaurants. I was excited to try out the food here and after four years of being married to Katie, I felt I deserved this great meal. Kidding, of course, just wanted to make sure you were still with me. 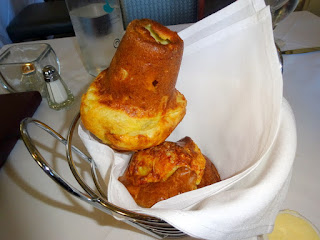 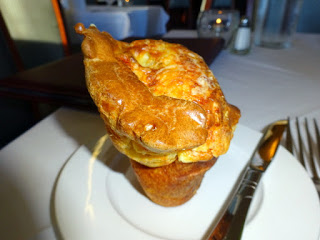 When these Popovers were first brought out I was not too enthused. They brought to my mind the bland, overhyped Yorkshire pudding that goes largely ignored when I get it with my prime rib at most places. After my first bite of this popover that negative connotation quickly went away. These were nothing like that. They had a great taste to them, were still airy inside, but had more depth than the usual Yorkshire pudding that has haunted me for a long while. These were very filling and after our second one each, we had to tell them to stop bringing them out. Great butter with these too. 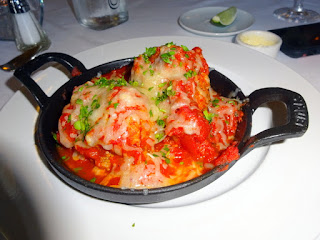 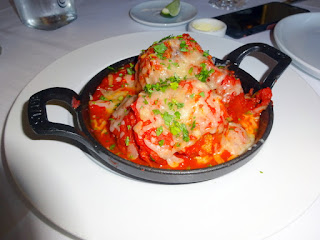 Our server Jermaine suggested we try the American Kobe Beef Meatballs ($15) as a starter. He did not steer us wrong. These come two to an order and were almost tennis ball sized. Very nice and tender, the beef really shined here with a nice clean taste to it. The red sauce was the perfect balance between acidic and sweet, while the caciocavallo cheese that came blanketed over each meatball was nice and mellow. Also, cheers to Davio's for calling these American Kobe, instead of just Kobe, which makes you think that the beef comes from Japan. Too many restaurants do this kind of underhanded tactic. 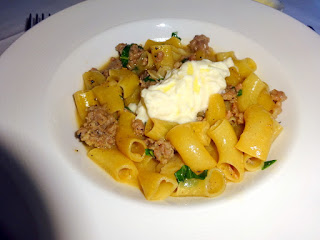 Continuing our Italian portion of our meal, we decided we'd try out one of their pasta dishes, which are offered as a meal, or as an appetizer portion. The appetizer size of this Sausage and Rigatoni ($15) was the perfect size for splitting between Katie and myself. The above shot is just my share of this, which they graciously split for us in the kitchen. A very nice touch. This was one of the better pasta dishes I have had in recent memory. The pasta was obviously made fresh here and had a great texture to it. I loved the sausage and the creamy burrata they used in this, with just a touch of truffle oil for an added richness Wonderful. 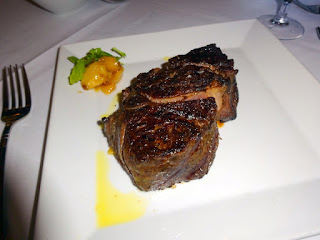 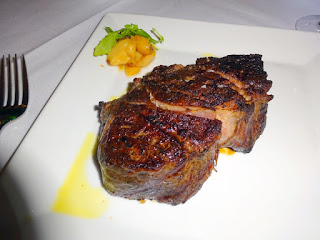 Now the main event for me, the 18 Ounce Prime Aged Ribeye ($54). The ribeye has long been my favorite steak to try when I'm in a steak restaurant for the first time. I use it as a benchmark to judge a steakhouse. This one was not my favorite. It was a good sized piece of meat, but I had a few issues with it. I know that some fat is to be expected when having a ribeye, as that's where a lot of the flavor comes from, but this one had an excessive amount. I also felt the meat needed to be flavored a lot more. It could not stand on its own, as I needed to ask for some Bernaise sauce and their not very tasty Davio's steak sauce to wake this up a bit. On the positive side, it was cooked to my desired medium rare and the half that I took home for dinner the next day was better after I trimmed the fat away and added extra sauce to it. Disappointing ribeye though. 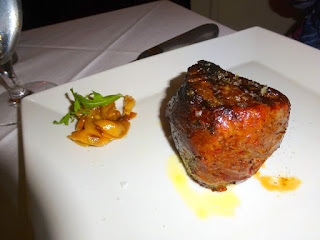 Whenever we eat in a steak restaurant, I always cringe when Katie orders, because she always wants her steak to be medium well, which is actually an improvement over when we first started dating and she would want her beef cooked well done. At least she's grown a bit in that respect. On this trip to Davio's, she went with the 8 Ounce Center Cut Filet Mignon ($45). I'm usually hesitant to try her steaks because they are too overcooked for my taste, but I did try this one, and it wasn't bad. It definitely had more flavor than my ribeye, which is something I was not expecting and it was tender, even though it was medium well. A mark of someone that knows how to cook a steak. She loved this steak and the roasted garlic that came with it. She got their gorgonzola sauce to go with the steak and it was the best of all the sauces we tried here. Good flavor to it, but balanced enough that it let the filet be the star of the show. 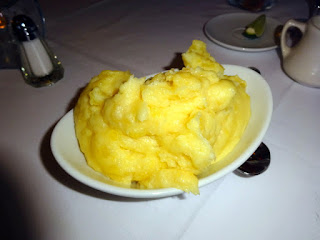 Since we had eaten so much prior to our main meals, we decided to only get one side to go with our entrees. The Creamy Potatoes ($9) would be that side. These were some pretty good mashed potatoes, and they were definitely buttery. Next time we will definitely try their horseradish mashed potatoes, macaroni n' cheese, or brussels sprouts. 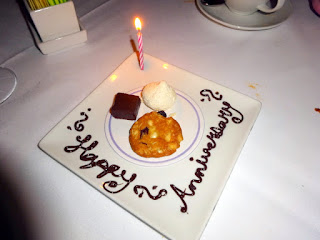 Call me weird, but I was not too enthused with the dessert cart at Davio's. A lot of their desserts were espresso based, and as I'm not really fond of coffee, we decided to skip dessert, but they brought us this complimentary dessert plate in honor of our anniversary. A very nice gesture.

So what to make of Davio's? I'd place them outside of my OC steakhouse Mount Rushmore based on this visit. The ribeye I had here does not compare to the ones I've had at Mastro's, Capital Grille, Ruth Chris, or Sellane Steak Tavern. The steak lacked that wow factor and seemed to be of an inferior quality to the other steak places that  I mentioned above. I did however like the Italian items that they offer here. The pasta and meatballs were right up there with what they serve at some of the best Italian restaurants in OC. Dessert options need a little more diversity in my opinion, like maybe a butter cake? Service was some of the best we've had in a long while. Our server Jermaine was personable, easy to talk with and kept tabs on all of his tables with ease. The rest of the staff made a great effort to keep things moving along at a leisurely, but efficient pace and make sure that each of their guests had their every need met.  It will be interesting to see how Davio's will fit into the already crowded OC steakhouse market in the future. Just like it will be interesting to see how long Katie will be able to put up with being married to me.

For more information about Davio's, you can check them out here: https://davios.com/
Posted by OCEater at 8:19 AM