A Little Taste of Cuba in Irvine 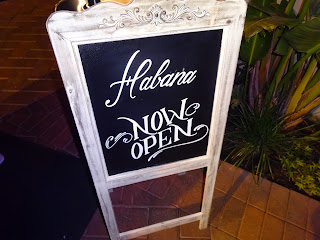 If you have been to the Irvine Spectrum Center recently you have probably noticed all of the construction going on in the former Macy's area of this large South OC shopping and entertainment complex. The Macy's has been demolished, there are quite a few parking spots being taken away by the construction, and the Irvine Company has just announced 14 of the eventual 30 new businesses that will be opening over the next year.

These include an 85 Degrees Bakery and Cafe, a Hello Kitty Cafe, an Afters Ice Cream, a BLK Coffee, and a Falasophy, which is a modern Lebanese street kitchen. It's not all food places of course, as there's also going to be a Sephora and the always trendy H&M. This roster of new stores and restaurants is sure to make the Spectrum busier, but there's also going to be a new 1,500 space parking structure built to help alleviate the troublesome parking situation here.

For now, Habana is kind of on an island off by itself. If you are coming from the mall side, Habana is situated right behind the Urban Outfitters, Barnes & Noble, and Tilly's. If you are coming from the parking lot, look for Dave and Buster's and it will be to your left. Complicating things a bit, Habana has no sign on its building. I'm not sure if this is a temporary thing or not, but it does make it a little harder to find this isolated (for now) restaurant.

Habana is not new of course. The location at the LAB in Costa Mesa has been open for over twenty years now and has been the scene for some wild late nights when I was in my 20's and early 30's. I've also had some pretty good Cuban dinners at Habana, including this one that I reviewed seven years ago. Has it really been that long? Geez, it was definitely time to visit Habana's new spot at The Spectrum.

Entering Habana is done on the mall side of the restaurant. If you enter from the parking lot you will be entering their small coffee shop and bakery. The inside of Habana transports you to a bygone era that most of us have just seen in the movies or on TV. There's a patio which we hear is nice and serene, but we were seated in their glorious dining room, with its arched, high ceilings, which lends to the grand ballroom feel you get when dining here. Adding to the ambiance is the table setting, with its small lamps providing not enough lighting to the darker than I would like restaurant, the glass chalices used for water glasses, and the china that looks like it's right from the 50's, and only used for special occasions. All of this ambiance was great, but it's all for naught if the food is not good, so let's see how that turned out for us. 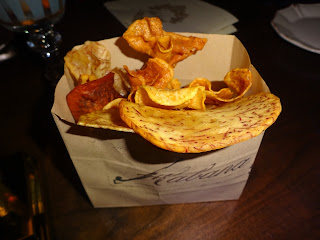 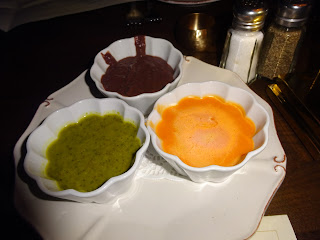 Mexican restaurants traditionally start you off with chips and salsa, while at Habana they start your meal with a trio of cassava, taro, and sweet potato chips and then pair it with a trio of sauces; chimichurri, a red pepper and garlic salsa, and the best of the bunch, a black bean dip which I could not get enough of. Addictive, and they were not shy about refilling this. 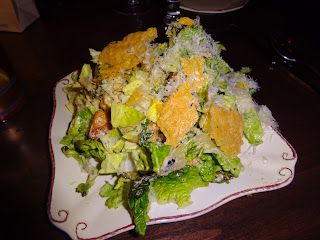 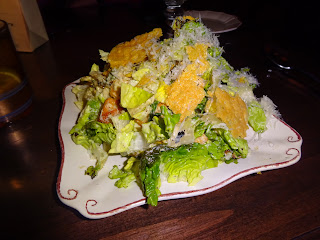 It had been almost two days since my last Caesar salad, and I was intrigued by the Habana Caesar Salad ($7), so I had to give it a try. Not only was this a very generous portion size for a Caesar, it could have easily fed two people, but I liked the slight twist they made to make this their own. It came with some very good garlic croutons, some parmesan crisps which added some nice texture, and a very well done papaya seed Caesar dressing. The key to the success of this salad was plenty of parmesan and the just right amount of dressing used on this. The papaya tinge was just enough but did not overpower. A delicious salad which I would get again without hesitation. 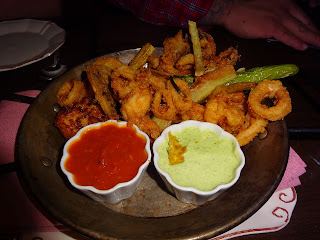 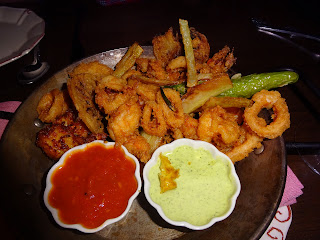 Ozker must have been a little jealous that I was enjoying my salad so much because he hastily ordered this Mariscos Fritos ($14). This fried fish platter contained some calamari, shrimp, and conch fritters. That's at least what the menu said, but I only saw one or two shrimp and no conch. Maybe Ozker snagged them before I got a chance to try them, but he's not that fast. The buttermilk fried calamari was nicely done, without the heaviness that usually accompanies fried fish. I really enjoyed the jalapeno crema that came as a dipping sauce with this. 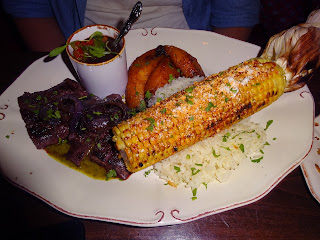 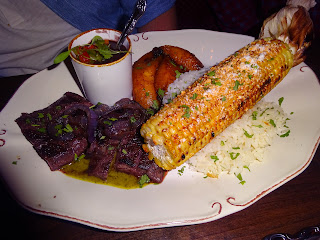 Sorry for the poor picture quality of Martin's entree, it was really dark in the dining room on this evening. He had the El Churrasco ($28). This plate included an 8-ounce skirt steak, corn on the cob with a chile lime butter and cotija cheese, white rice, plantains, and black beans. Martin thought the steak was a little under-seasoned, but it was helped out with a good chimichurri sauce included and was just tender enough. As for the sides, he was not really a big fan of the corn but liked the rice and the black beans well enough. He'd get something else the next time he was at Habana. 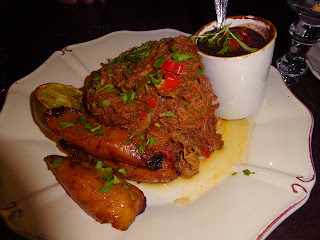 Ozker probably got the most famous of all Cuban dishes, the Ropa Vieja ($20). He made quick work of this shredded beef which was studded with sweet peppers, onions, garlic, and tomatoes, and then served over rice. A very comforting dish, the beef was flavorful and tender, and the sides of black beans and plantains did not last too long either. A very good rendition of Cuba's national dish. 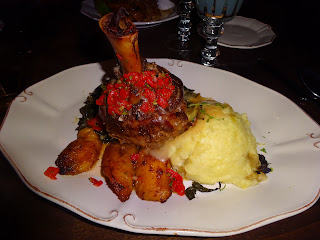 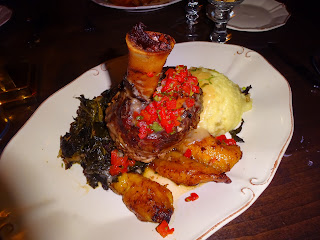 I always steer towards pork at Cuban restaurants, and that was the case when I stepped up and had this El Puerco Primo ($23). This homey meal had a great balance to it. A very large pork shank was plopped in the middle of some creamy and delicious garlic mashed potatoes, greens, and sweet plantains to finish it off. I loved the savory pork, it did not have a bad bite in the bunch. The greens worked well with the potatoes, and the plate was rounded out nicely with the sweet plantains, which I'm not usually too fond of, but they went well here. A winning dish for sure. 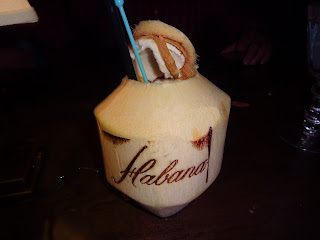 No dessert for Martin, as he'd rather drink his dessert apparently. When you are at Habana you will no doubt hear the bartenders chopping coconuts to make this Al Centro Pa Dentro ($10). Looking around the dining room on this evening, this might be the signature drink at Habana. It's a mixture of coconut water, mint and Bacardi served in a freshly chopped coconut. I liked the refreshing taste of this, with the little kick you get from the rum after each sip. Be advised that these tip over rather easily, as both Martin and Ozker, spilled theirs at different parts of the evening. Amatures. 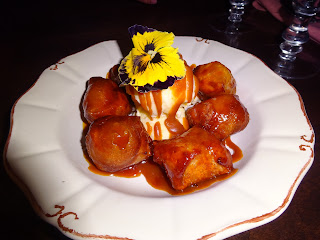 There were many desserts which sounded good to finish off my evening, but when I saw these Banana Fritters ($8) on the menu, I knew my quest for dessert was over. These bananas were wrapped in pastry dough and then fried and drizzled with a rich caramel rum sauce, and served with ice cream. I liked these, but they were a little difficult to eat. The pastry dough was not as light as I was hoping for. It was difficult to cut through, and once I did get through it, all the fried dough came off in one fell swoop. The caramel sauce was magical though.

This visit to Habana reaffirmed their position as top of the Cuban restaurant throne in OC. Not only is this one of the most beautiful restaurants in Orange County, but they have the food to back it up. I do wish they had their Cuban sandwich on the dinner menu, but that just gives me a reason to go back for lunch very soon. There's also a brunch that we have heard some good things about. Service on this evening was very professional, and our server kept things moving along nicely with some good pacing. I'm looking forward to the other new restaurants opening up at The Spectrum, but having Habana there is a great way to start things off.

Out of five bags of sugar, (because most people probably don't know this, but there's a Habana in Queensland, Australia named after a now-shuttered sugar mill), five being best to zero being worst, Habana gets 3.5 bags of sugar.


For more information about Habana, head to their website here: https://www.restauranthabana.com/#home-section
Posted by OCEater at 7:57 AM