Something to Crow About in Orange? 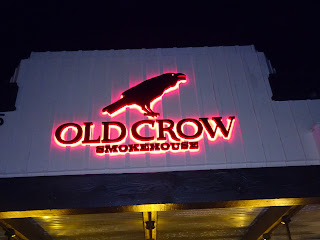 I could not believe our luck. While we were looking for a restaurant to eat at before heading to a party in Orange, I had to do a double take. There had to be some sort of mistake. I have heard raves about Old Crow Smokehouse, but I knew that they were anchored at Pacific City in Huntington Beach. Surely, Yelp had gotten it wrong. They had an Old Crow Smokehouse listed in Orange. I guess I have to step up my new restaurant openings game.

So Old Crow is in Orange. They took over the old Who Song and Larry's spot in the Stadium Promenade Shopping Center. Old Crow has gotten glowing reviews from OC Register Restaurant Critic Brad Johnson, who included this place as one of his top 75 OC restaurants of this year. He also gave them a glowing review in May.

This Orange outpost opened in late October. We had never been to Who Song and Larry's, but I had been to this location when it was Acapulco's a few years back. It's unrecognizable now from those days. Much more wide open, lots of dark woods, and a definite country vibe dominate the space. We were seated near the bar at high top tables, which are not my favorite types of seating arrangements, but we made it work.

I had made reservations on Open Table for 7:30 on a recent Saturday night and we got seated right on time. I'm sure this Old Crow gets a little hectic when there's something going on at the nearby Honda Center. There's plenty of TV's throughout the bar area, and they were tuned to various sporting events during our stay. Live country music takes over after 9 on Friday and Saturday nights.

On to the food though. This is Chicago style barbecue, kind of like Lillie's Q in Brea, which we hope is ready to open again soon after their hiatus while their parking structure is being built. Anyways, back to Old Crow. The characteristics of Chicago style barbecue is heavy on the smoking, low and slow, and an emphasis on ribs and rib tips. We were very excited to get to everything, so without further ado here's our take on Old Crow Smokehouse. 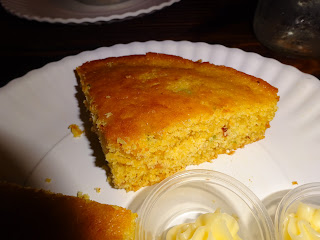 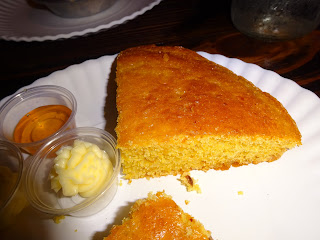 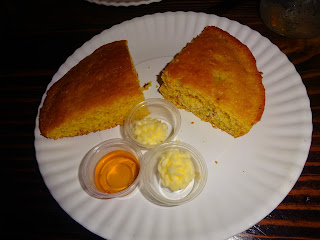 We started things off by getting a slice each of their Classic Cornbread ($2) and the Bacon, Cheese, and Jalapeno Cornbread ($3) after our server really talked it up. We were not too impressed. I like a sweeter cornbread, and this one was not very sweet, almost bordering on being boring. I also could not tell the difference between the regular and the bacon jalapeno variety. They ended up tasting the same to me. 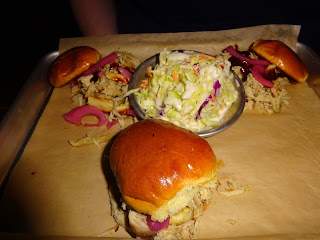 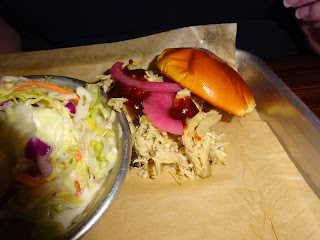 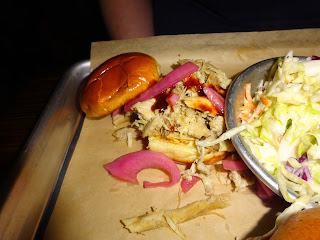 Entree time and Katie selected the Old Crow Smoked Sliders ($12) as her meal on this evening. She had asked for a brisket, pulled pork, and a chicken slider, and that's how our check read, but she ended up just getting three of the pulled chicken sliders. No worries, you kind of expect the kitchen of a new restaurant to have some kinks to work out. These chicken sliders were just okay in Katie's opinion. The chicken was fine but did not stand out. She also felt they could have included a little more chicken per slider. The pickled red onion along with the barbecue sauce on the table helped to keep her interested. For her side item, she tried the crunchy coleslaw, which I kind of enjoyed. While the menu touted this as having a horseradish-slaw dressing, I did not detect any hint of horseradish here, but I still enjoyed this subdued coleslaw, which had just the right amount of dressing to cabbage ratio. 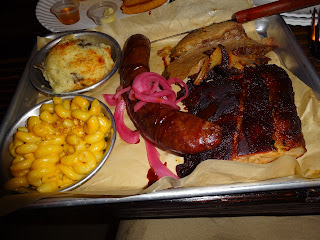 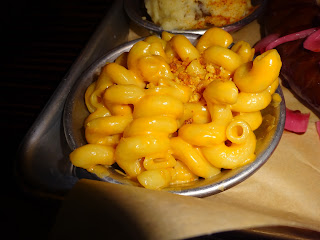 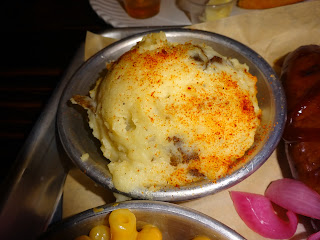 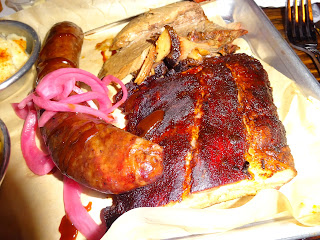 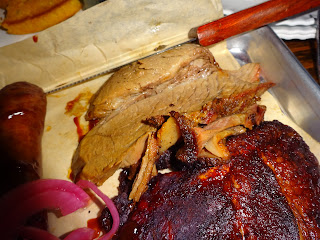 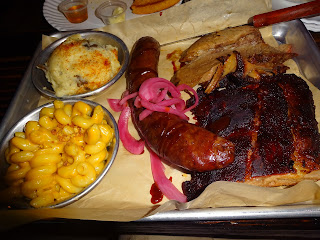 As is my custom when dining at a barbecue restaurant for the first time, I lean towards getting a combo meal, and at Old Crow that would be this Pick Three ($25). For my three types of meat, I went with the brisket, sausage, and the quarter slab of pork baby back ribs. The ribs were head and shoulders above the other two meat selections. In fact, these were some of the best ribs I have had. They were tender, had plenty of meat on each bone, had a great bark crusted on their outer portion, with just the right amount of smoke included here. The other meats were fine, but could not compare to the ribs. I had some really good bites of the brisket, but other forkfuls were kind of on the dry side. The sausage was the weak link here, pun intended. It was a very sturdy sausage, but it needed a little moisture to make it easier to eat. Decent flavor, but I expected more of a flavor pop. The sides were just kind of average. The menu promised that the country mashed potatoes would include rosemary, garlic, and a bbq rub, but these taters fell flat. I liked the consistency of the spuds, but they did not really taste like anything other than potato. No garlic, nor rosemary was present. The mac and cheese was equally disappointing, as it came out lukewarm, and needed an extra spark to keep me interested after my first two bites. Kind of lackluster. I'd try the fries and the baked beans on my next visit. 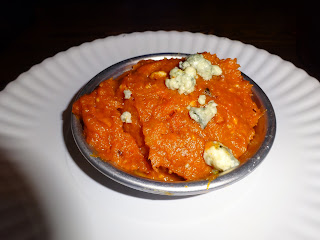 I almost forgot to post this extra side that we ordered, the Savory Sweet Potatoes with Blue Cheese ($5). Points for originality, but after the initial shock of having blue cheese with sweet potato wore off, I lost interest. 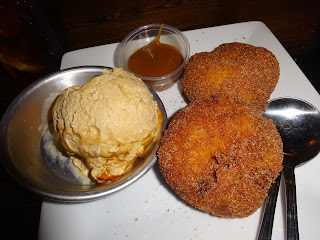 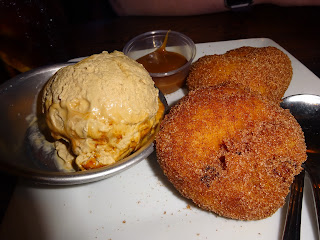 Dessert was our last hurrah at Old Crow, and we went out with a bang with these Apple Fritters ($6). Not what I was expecting when I saw apple fritters on the menu. At Old Crow, they take apples and coat them with a tempura batter, fry them, and dredge them with cinnamon and sugar to form a lighter crumb donut. It comes served with some caramel sauce and a maple brown sugar gelato.  There was a slight disconnect with this. I felt it could have been served better and all the components were a little awkward. I liked it enough, but will probably try another dessert next time.

As is the case with a good many of the barbecue restaurants in OC, there are some good and some not so good parts to Old Crow Smokehouse. I found the meats to be above average, especially the ribs, but the sides and the dessert were average or below. I'm definitely trying the burnt ends and the tri-tip on our next visit. I just wish they were offered as part of a combo meal. Sides were disappointing and need some help here. We have heard some rumblings about slow service, but we did not experience anything close to that on this rather busy Saturday night. Our server Peggy was excellent, and she anticipated our every need during our stay. I felt the prices here were right on par with what you'd pay at let's say Lucille's, but the meats here are way better. We are glad Old Crow is open so close to the Honda Center, and we will be back before a game for sure.

For more information about Old Crow Smokehouse, head over to their website here: http://oldcrowsmokehouse.com/orange/
Posted by OCEater at 7:26 AM