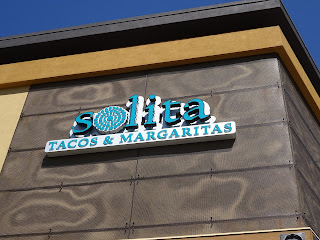 Whenever we come up this way to see Katie's cousins our plans always seem to go out of whack. We had these great intentions to hit a brunch spot in Sherman Oaks or Glendale on the way home, but after a late night of drinking, laughing, and not getting back to our hotel until close to 2 am, we threw our ambitions out the window. Wanting to sleep until right near our 11 o'clock checkout time, we instead chose a brunch spot near our hotel and one where we knew we could get a table right away. We ended up at a restaurant that was very familiar to both Katie and me, Solita.

Solita opened up in Huntington Beach almost four years ago. Man does time fly. We were there for a media dinner a few weeks after they opened and really enjoyed our experience. We have been back to the HB location sporadically since that first visit, but never for brunch. This Valencia outpost, which is situated at the front of the Valencia Town Center has been open for three years now.

Our love for Solita is probably not much of a surprise to any of our long-time readers of this restaurant blog. Solita is headed by Partner and Executive Chef Deborah Schneider, who we fell in love with, and her cuisine at Sol Cocina in Newport Beach. She's been nominated for a James Beard Award for her cookbook, Cooking With the Seasons at Rancho La Puerta, written five other cookbooks, was instrumental in the farm to table movement and has over 25 years worth of professional cooking experience.

As Sol Cocina is more of a polished and upscale Mexican restaurant, Solita was created to cater to the neighborhood as a more casual and relaxed concept. They want to become your local go-to spot for Mexican food. Their menu is filled with a bunch of appetizer options and Mexican favorites. There's only one item that is over the $20 mark, and they are well thought of for their bar program, with margaritas and the frozen horchata being favorites. Still having to drive 2 hours home, a drink was not in the cards for me, but I was excited to spend some quality time with Katie's cousins and try Solita's brunch for the first time. 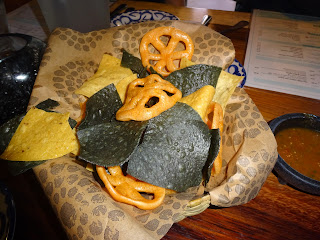 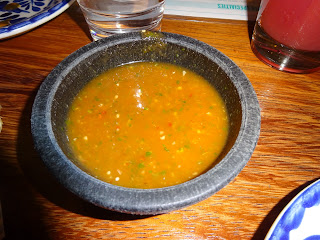 I devoured my fair share of these tortilla chips and duros when they were sat in front of us. I could not control myself, and while they were delicious, the crunch also prevented me from having to listen to the birthday girl Yvette, who was rambling on about how good she feels for turning 80. Both the duros and the lightly fried tortilla chips were a great vessel for the salsa which provided a nice and steady heat to it. 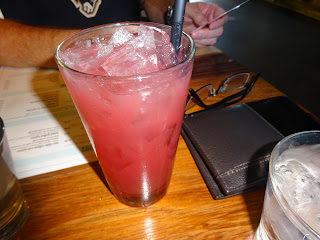 Since Steve wanted to keep the party going from the night before, he ordered two of these Watermelon Margaritas ($11) on this early afternoon. They are made with Agavales Blanco Tequila as a base and then crushed watermelon and lime juice is added. Very refreshing and it probably did the job of numbing the pain of being married to Yvette. 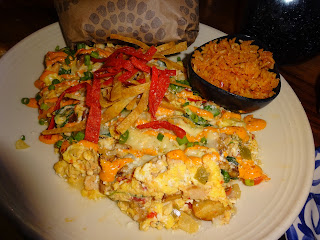 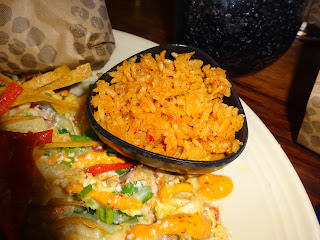 Entrees made their way out to us, and up first was Katie's choice, the colorful Mad Scramble ($14.50). With this one, you have the choice of chorizo, carnitas, or chicken, which is what she went with. The scramble is also made up of tomatoes, spinach, onions, potatoes, peppers, chipotle chiles, Mexican crema, melted cheese, and of course scrambled eggs. Katie felt that the sauce on this was a bit too spicy for her palette, and she'd ask for it to be on the side next time. She claimed that this was filling and she also was a big fan of the tortilla strips topping this, as they added a nice crunch to most bites. I really enjoyed the bite I had of this. The sauce was a bit spicy, but not overbearing. 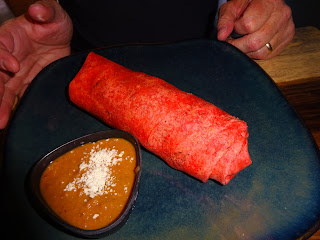 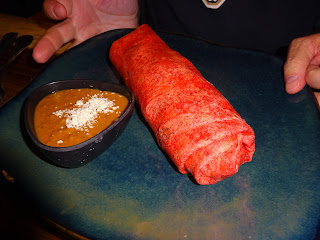 Not the most picturesque plating, but how can you really make a burrito visually stunning without cutting into it? Steve was feeling the Breakfast Burrito ($10) on this early afternoon at Solita. This red flour tortilla was wrapped around refried black beans, scrambled eggs, and cheese. Steve did not really seem too jazzed about this burrito, as he tried to trade half of it to his wife, but no dice. Yvette was having no part of it. I would have added some meat to this burrito to give it a little more substance. 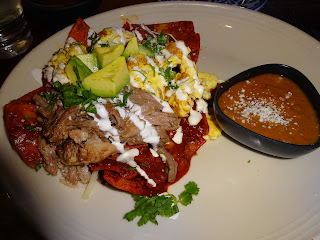 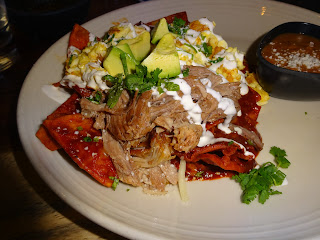 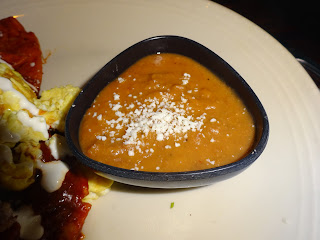 I can not get chilaquiles off of my mind lately, so it was a foregone conclusion that I would get the Chilaquiles ($11.75) at Solita. I have to say this was a pretty satisfying version of my favorite Mexican breakfast. I did add the carnitas at a $2.75 upcharge, but it was totally worth it. The fried tortilla chips were nice and firm like I like them, and I had the choice of green or red salsa, so I went with the red. Scrambled eggs, sliced avocado, cheese, and crema topped the chips. When this was sat in front of me I thought the serving size was a little on the small size, but it was a very filling plate. The pork was nice and tender, the wedges of avocado were fresh and creamy, and the red salsa gave this a little spark of heat which was appreciated. I got to choose a side item to go with this, and I went with the beans, which were a little too watery, but they ended up tasting fine.

Even though we did not plan on coming to Solita on this trip to the valley, it ended up being a pretty good brunch. We got in and out rather quickly, my chilaquiles were well above average, and we got to spend a little more time with our favorite cousins, Yvette, Steve, and Gaby. Service was efficient and friendly, just like we have come to expect from our trips to Solita in Huntington Beach. I'd like a little more variety to choose from with the brunch menu, and I think they would put out a killer brunch buffet. We will try to hit the brunch spots we were supposed to try on this trip the next time we are up this way. Of course, with Katie's family, it might not happen.

Out of five Vikings, (because the mascot for Valencia High School is Vick the Viking), five being best to zero being worst, Solita Tacos and Margaritas gets 3 Vikings.

For more information about Solita Tacos and Margaritas, head to their website here: https://www.solitatacos.com/
Posted by OCEater at 7:52 AM