From Corona with Love 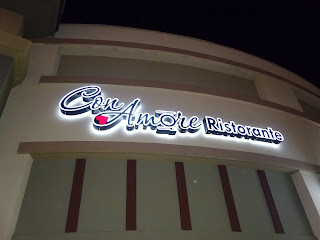 It has been a long while since we have made it out to Corona for a restaurant review. We had not seen our good friend Anthony for about a year or so, and unfortunately, if we want to see him, we also have to see his wife Sabrina. We decided to make this sacrifice and head out on the improved 91 Freeway? After our hour and a half drive from OC, we decided to try a place new to all four of us, Con Amore Ristorante.

This Italian restaurant is tucked away in the Corona Crossings Shopping Center, right next to the Edwards Movie Theater. With the hard to find location and the plethora of restaurants in the area, it would be easy to kind of overlook this place. Opened since January of last year, Con Amore has gotten some glowing reviews online, been praised for their customer service, and been called one of the most authentic Italian restaurants in Corona. I was pretty excited to see if they could live up to this hype.

We got here at 7:30 on a recent Saturday evening. The 20 table or so restaurant was about half full, and we got sat right away in the comfortable dining room. The feel of this restaurant kind of brought to mind a less corporate Macaroni Grill. Tables were nicely spaced, high ceilings cut down on noise, and a faux rock wall framed their nicely stocked wine cabinet. The small, compact menu still offers plenty to choose from. They have a good number of appetizers, two salad options, pasta dishes, which hover around the $15 mark, and more substantial entrees that are offered for around $25. We eagerly ordered, not only because we were hungry, but because we were hoping that Sabrina would stop yammering on about scrapbooking if she had food in front of her. It was no use, she was not to be deterred talking about some new pair of scissors she had just bought. Fascinating. 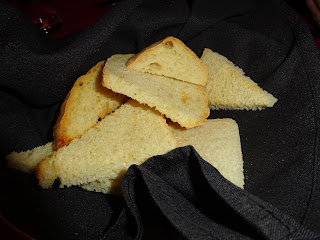 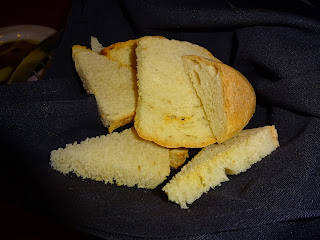 When the bread basket was set in front of us, I think we all contemplated putting pieces in our ears to avoid listening to Sabrina anymore, but this is a nice place, so we refrained. This bread was nicely toasted and on its own was kind of average. It was made better with the provided oil and vinegar. They were not shy about offering extra bread throughout our stay at Con Amore. 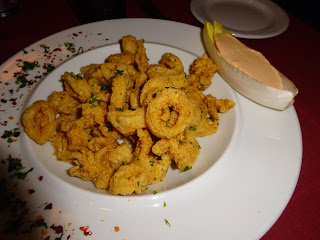 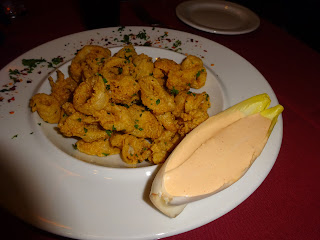 Neither of the girls is a fan of Calamari Fritti ($13), so this was split between Anthony and me. This was a pretty good version of this fried squid dish. It was nicely fried, without being too oily, and the squid had just the right texture underneath the light breading. This was made even better with the very well made aurora sauce, which I learned is a combination of bechamel, cream, and tomato puree. Wish I'd see this sauce on more Italian restaurant menus. 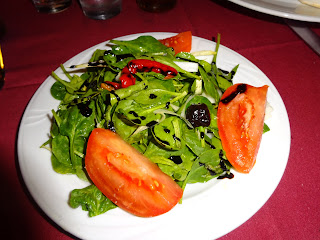 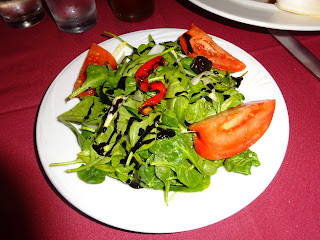 Both Katie and I are salad eaters, so we got this good looking Side Salad ($6) which is not listed on the menu. This was a very generous size for a side salad. It came with some very fresh greens, tomatoes, olives, roasted red peppers, and a drizzle of balsamic topping this off. A little heavier hand with the dressing would have been my preference, but still pretty solid. 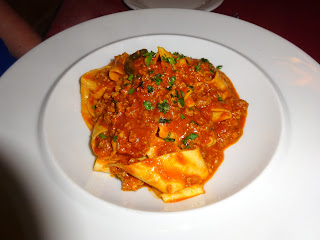 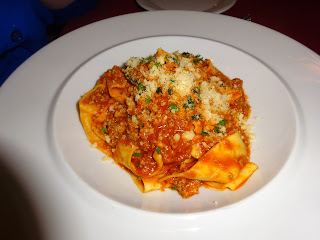 Katie's dinner was out first, and she was very pleased with this Pappardelle Alla Bolognese ($14). The pasta tasted freshly made, and their meaty bolognese was way better than average. Katie described this meal as very comforting, and she said she would get this again on future visits to Con Amore. 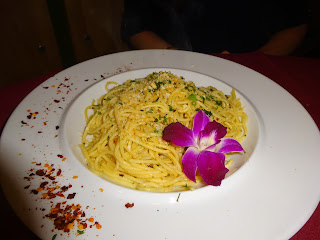 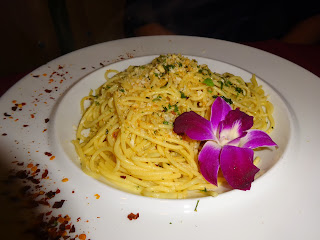 Sabrina is a pretty basic eater and doesn't really like to get too out of control when choosing her meals, so this Le Pasta di Mezzanotte ($10) was right up her alley. This was just spaghetti dressed with olive oil, garlic, and some red pepper flakes on the side of the dish. Sabrina seemed to like this, and I enjoyed the presentation here, with the flower and the red pepper flakes on the side. 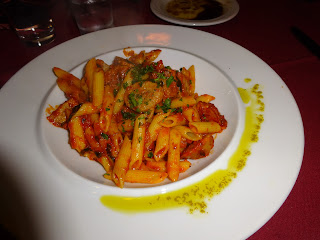 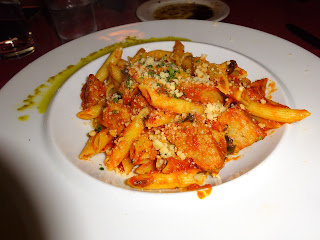 I needed a little more pizzaz than Sabrina's entree, and I got it with this Penne Carnosa ($15). With this dish, the fresh penne pasta was joined by some house made sausage and meatball in a red sauce. I really enjoyed that almost every bite included either sausage or a meatball. This was filling, without being too heavy. Yes, I added red pepper flakes to this, but I do that with every pasta dish I order. 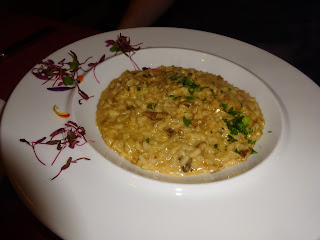 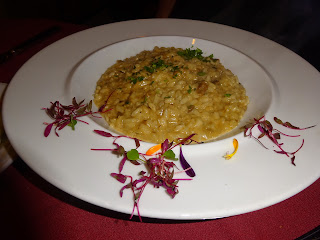 Probably the best meal of the night belonged to Anthony. He went with the Risotto ai Porcini ($25). This mushroom risotto dish was done really well. The risotto was cooked perfectly, about as creamy as you could get it. There was some big time mushroom flavor in this, which was balanced out by some parsley and Reggiano cheese. A very filling and earthy meal, which I'd probably get on my next visit to Con Amore. 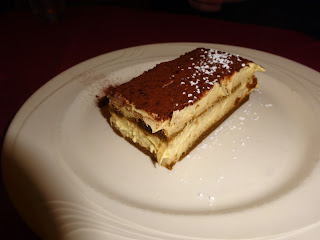 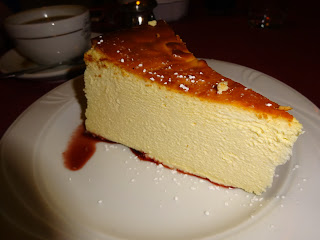 Everything had been pretty good up until this point, and while the desserts we had were fine, they failed to impress. Tiramisu ($9) was a rather small serving size, and the flavor of this was rather heavy on the coffee, which I'm not really a fan of. The Torta di Ricotta Alla Siciliana ($10) was a better choice for me, but it needed more of a sauce to make it more interesting. The guts of this cheesecake were well made but heavier than I usually like. I probably should have tried their cannoli instead.

Even though we did not end on the high note that I had hoped for, I'd have to say that I left Con Amore pretty impressed. For people who enjoy more authentic Italian food, rather than the heavily sauced and cheesed Americanized Italian cuisine, which I also love, this is a great restaurant choice. Not that I have tried all the Italian restaurants in Corona, but Con Amore has definitely set the standard for Italian cuisine in this area. Service was also pretty impressive on this particular evening. The owner, Alfredo was very active during our stay, visiting tables, running food, and even serenading guests with what I assume to be an Italian birthday song. The food at Con Amore helped to soften the blow of seeing Sabrina after such a long absence, and I was proud of myself that I did not have to resort to putting the bread in my ears to try to block out her long winded story about how she got overcharged for a fruit cup many years ago in Tampa. Fascinating story Sabrina.

Out of five foam cups, (because the 9th largest employer in the city of Corona is the Dart Corporation, which is the world largest producer of foam cups and containers in the world), five being best to zero being worst, Con Amore Ristorante gets 3.5 foam cups.

For more information about Con Amore Ristorante, head to their website here: https://www.conamoreincorona.com/
Posted by OCEater at 5:33 PM