Can the Cannery Deliver a Great Anniversary Meal? 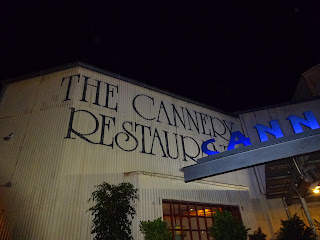 Well they said it couldn't be done, and probably many friends and family lost some money on this, but Katie and I just celebrated our second wedding anniversary. Yes, she must be a saint for putting up with me these past 24 months of wedded bliss, and 72 months before that. Yes, if my math is correct, we've been together for eight years now, with no signs of slowing down anytime soon. So how does a foodie celebrate a big life milestone? Going out to dinner of course, and on this particular evening, I neglected my usual Tuesday night poker game, and Katie and I met at the Cannery Restaurant in Newport Beach.

The Cannery Restaurant actually used to be the site of a real fish cannery. Opened in 1921, and taken over by the Western Canners Company in 1934, they were canning tuna and other seafood in this location until the business ceased operation in 1966. Of course with this picturesque setting, it was just a matter of time before some businessmen decided this would be the perfect spot for a restaurant and some retail shops. The original cannery building had been torn down, and a new structure was built, and the Cannery Restaurant was open for business in 1973.

The Cannery was a meeting place for city officials, an occasional celebrity, locals, and many out of town guests. Then in 1999 the restaurant closed and was slated for demolition to make room for condos. Local resident Jack Croul bought the land, and after a brief two-year respite, the Cannery was reopened again under the tutelage of Ron Salisbury, he of the iconic El Cholo chain of Mexican restaurants.

The Cannery is going through another transition now that their former Executive Chef, Nick Weber has left to pursue a catering venture from what we hear. Now taking over the reigns of this historic kitchen is Phillip Tangonan, a former sous chef here. I'm not sure how long ago Chef Nick left, but his name was still on the menu, and the hostess and our waiter made it seem like this transition just happened. Either way, we were excited to experience the Cannery and celebrate our anniversary. 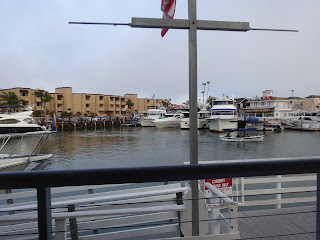 When we arrived, we were given the opportunity to either eat outside or inside. Outside is, of course, the correct response when dining at The Cannery. Much to my surprise, we were seated right along the rail and had this view to enjoy throughout our stay. There's something so relaxing about dining on the water, watching the boats travel the channel, and inhaling the ocean air. It's like we were on vacation, even though we were only twenty miles from home. 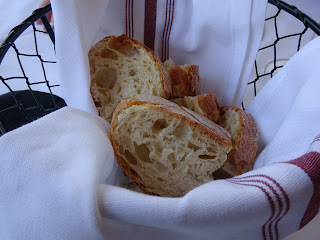 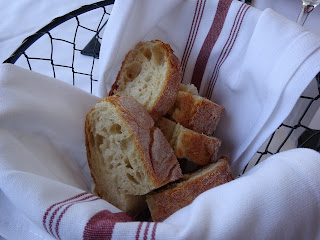 As is customary in nice restaurants such as this, we were presented with a bread basket before ordering. This sourdough bread came to the table warm and with plenty of butter. It could have had a bit more sour to it, but was a sturdy bread, with a slightly hardened crust to it. We did go through two baskets of this. Carbs be damned on our anniversary. 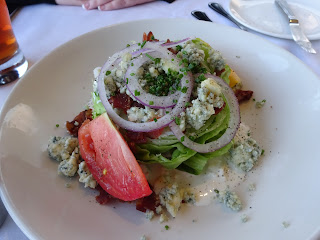 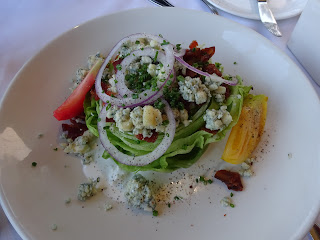 When I was checking out the menu online before meeting Katie here, this Wedge Salad ($14) piqued my interest, but Katie ordered it before I could claim it. This was a beautifully done wedge, with plenty of Mineshaft blue cheese, red onion, tomato, applewood smoked bacon, and of course iceberg lettuce. Katie loved this colorful and fresh tasting salad. I enjoyed the few bites I got of this, which had plenty of dressing included, which is always a plus in my book. 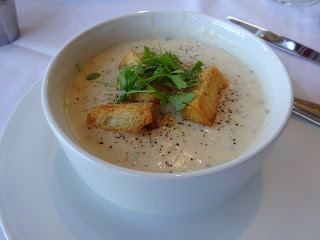 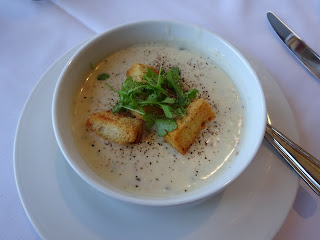 With Katie taking my top draft pick, I was in a quandary as to whether to have my usual Caesar or go for the New England Clam Chowder ($12). You can see from the above picture that I went with the chowder, which was topped wth brioche croutons and micro celery. Even though there was a little grittiness included in the clams, this was one of the better versions of my favorite kind of soup. It was creamy and had a great depth of flavor. I would have liked a little more potato and clam included, but very solid nonetheless. 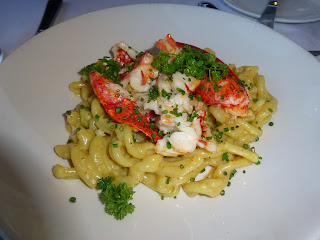 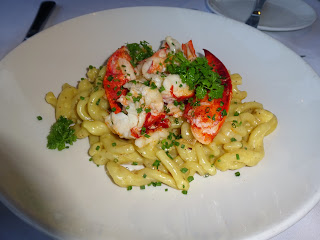 It almost seems sacrilege not to get seafood when you are so close to the ocean, so both Katie and I went the seafood route on this evening, starting with her choice, the House Made Lobster Pasta ($42). The pasta here is Gemelli, which is topped with a good amount of Maine lobster, a carbonara sauce, and some herbs. Katie liked that this dish was not too heavy and it really showcased the rich lobster. The carbonara sauce was understated, but still present. Katie claims that she would get this again. 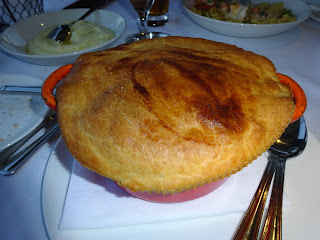 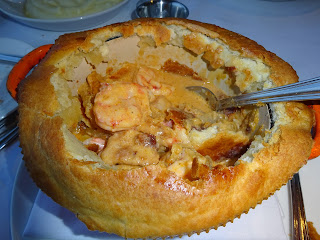 I'm a sucker for comfort food, so this Shrimp Pot Pie ($31) was right up my alley. The shrimp underneath this flaky crust was joined by a lobster sauce and some vegetables. There was plenty of good sized shrimp in here, but they kind of skimped out on the veggies. Underneath the crust, I was expecting to see a pie filled, but there was definitely room for more in this pot pie. The lobster sauce was delicious and went well with the shrimp. The crust was nicely done. A very comforting dish which warmed my insides. 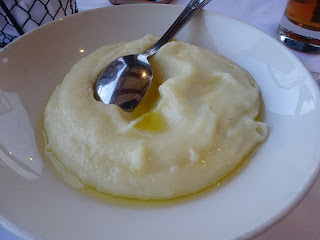 Just in case we did not have enough food already, we splurged and got these Robuchon Mashed Potatoes ($11) as well. As you can see from the picture above, these were a very buttery potato, which was nicely done, with a very smooth texture. I like a little more chunk to my mashed potatoes, but I still ate my fair share of these. Even good the day after with the rest of my shrimp pot pie. 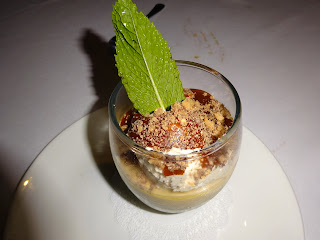 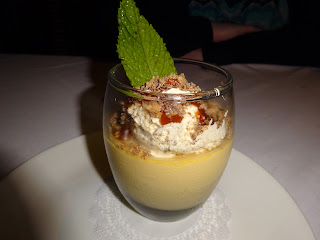 An anniversary dinner without dessert just wouldn't be right, so we decided to split this Salted Caramel Pudding ($9). This layered dessert included a brown butter chantilly, a not over the top sweet caramel bourbon sauce, and was finished off with some of the best toffee on the planet, a local favorite, B's Toffee. I really enjoyed this, but as is the case with most of these kinds of desserts, it's always a challenge getting a little bit of everything in one perfect bite. It's also hard being polite as Katie and I were fencing with our spoons trying to get our fair share of this.

The Cannery was an excellent pick to help us usher in our second year of marriage. Yes, the prices were a little higher than they should be, mainly because of the area this restaurant is located in, but at least they are not just relying on getting people in the door with their view. The food is actually very good and has not missed a step since Chef Weber left. It will be interesting to see if Chef Tangonan will keep things the same, or will he venture out a bit and bring his own flair to the menu here. The service was stretched a little thin on this particular evening, as our server had far too many tables, so our meal kind of lagged a bit in spots. It did not diminish this visit though. The Cannery was a great restaurant to celebrate our second wedding anniversary, and I have no doubt we will be back to celebrate many more special occasions here.

Out of five cans of tuna, (in homage to what used to be produced in this location long ago), five being best to zero being worst, The Cannery Restaurant gets 3.5 cans of tuna.

For more information about The Cannery Restaurant, head over to their website here: https://cannerynewport.com/
Posted by OCEater at 8:29 AM