You Snooze, You're Not Going to Lose 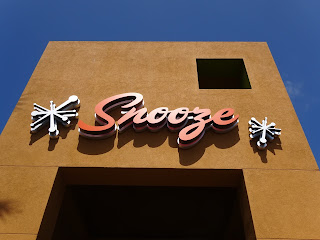 I've come to realize that most people are not morning people. I'm proud to say that I am a morning person. I love waking up early, getting some stuff done, and if I'm being completely honest, taking a nap later in the afternoon to make up for the sleep I missed by waking up early. My wife Katie is completely the opposite, as she likes to sleep in until noon, and then stays up late checking out her phone until the late hours of the evening. So it was rare that I could get her up and out the door to try a breakfast restaurant that has gotten a lot of buzz for the better part of three months now, Snooze.

A little bit of buzz might be one of the biggest understatements I have ever made on this restaurant blog. Snooze, which opened its first OC location in early July, has been a real hot ticket since opening up at the Tustin Marketplace, right next to Hopdoddy Burger Bar, and in the same parking lot as Ikea. They not only usually have wait times on weekdays, but on weekend mornings like this one, you can wait up to two hours to get inside and get a table. Needless to say, I was intrigued about the new kid in town.

Snooze is not a new restaurant. They have locations scattered about in Arizona, Colorado, Texas, and two others operating in San Diego. Founded by two brothers, a little over ten years ago in Denver, they wanted to reinvent the first meal of the day, which to be honest is a little challenging for a lot of restaurants. Don't get me wrong, I love eating breakfast foods, but after seven years of writing this blog, it's become apparent that a lot of restaurants serve the same old breakfast entrees that we've all become accustomed to for years. From the little that I knew about Snooze, I knew this was not going to be the case on this morning.

The Snooze menu is broken up into egg dishes, Benedict's, sweet breakfast foods, lighter fare, and a few breakfast inspired sandwiches, including a very intriguing Havana Day Dreaming sandwich, which is a riff on a Cuban, which is my favorite sandwich of all time. I also enjoyed seeing on their menu that they encourage customers to customize their items to suit their tastes, something that a lot of restaurants have gotten away from these days. Snooze also features a full bar and touts several cocktails, Bloody Mary's, and champagne drinks.

We arrived here at just before 10 and were met with a two and a half hour wait. Not that we didn't see this coming with all the people waiting outside the restaurant, and everything we had heard about this place. We gave the hostess our cell phone number, and killed time by walking around the entire Tustin Marketplace, which made the time go relatively quick, even though I was becoming hungrier by the minute. Finally, as we were in T.J. Maxx, my phone buzzed, and we high-tailed it back to the restaurant and got seated two hours and fifteen minutes after putting our name in. Let's see if the wait would be worth it. 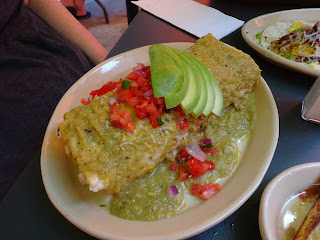 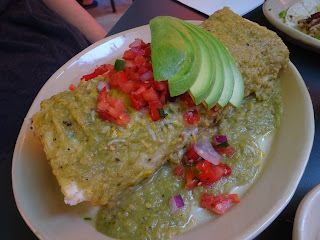 Ladies first, so we'll start with Katie's choice on this now early afternoon, the Snooze Breakfast Burrito ($10.25 or $15 as Katie ordered it). Yes, you read that correctly, this breakfast burrito was $15, as Katie added caramelized onion, sausage, and avocado to their base burrito that also came with scrambled eggs, hash browns, black beans, cheddar and jack cheese, and was then topped with pico de gallo and a green chili sauce. This was a huge burrito, which Katie only finished half of it and I took the other half home for dinner. I really enjoyed this the next day, even though Katie did not leave me too much in the way of sausage. Very selfish. 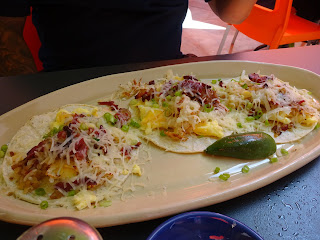 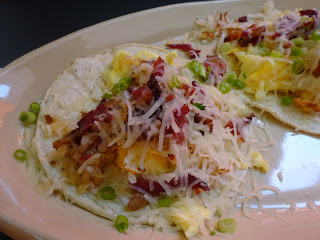 The breakfast taco has always intrigued me, and it must have done the same for our good friend Oscar, as he went with the Juan's Breakfast Tacos ($10 or $12 with bacon added). These three corn tortillas came topped with scrambled eggs, hash browns, and jack cheese. Oscar is a lightweight when it comes to spice, so he opted to omit the green chili hollandaise sauce and pico de gallo from his tacos. I'm sure this would have made these better, but these did not receive any complaints from our friend. I'll have to try breakfast tacos soon to see what all the fuss is about. 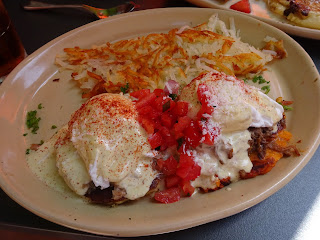 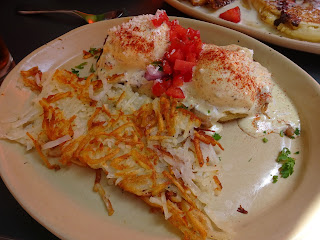 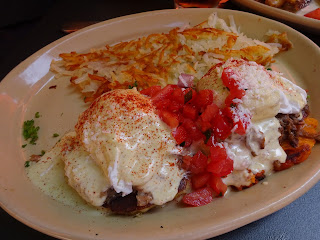 The creativity of the breakfast items at Snooze really makes itself evident in the Benedict portion of the menu. I was happy that they offered a Benny Duo ($13.25) for the indecisive here so I could try two Benedict's at the same time. It was a tough choice choosing between the six Benedict's offered, but I went with the Chilaquiles Benedict and the Chili Verde Benny. I did enjoy both of these, but I think the chilaquiles version edged out the chili verde version. The chilaquiles version had barbacoa beef placed on top of a stack of ranchero sauced tortillas and is finished with cheese, poached egg, roasted poblano hollandaise sauce, pico de gallo, and cotija cheese. The beef was good, and the hollandaise sauce provided a nice spark of heat. The egg was poached well, and the runny yolk bound everything together perfectly. The chili verde option came with a very good pork topping the green chili drenched tortillas, along with cheese, green chili hollandaise, poached egg, pico de gallo, and cotija cheese. The pork was solid here, but I expected a little more from the green chili sauce. It kind of fell flat for me. I also had wished that the serving size of these were a little larger. It seemed like I took three bites, and they were gone. These also came with house hash browns, which were pretty average. I asked for this extra crispy, but they were still a little soft in some spots. 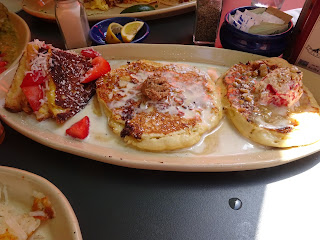 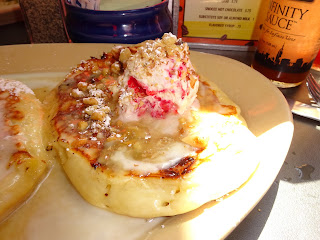 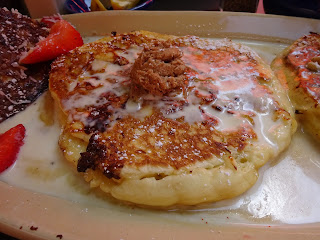 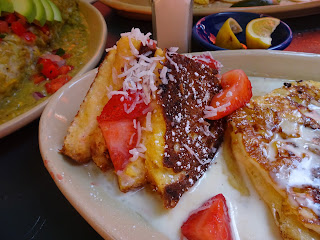 I guess I was pretty indecisive, or I just wanted to get a good lay of the land here at Snooze because I also took advantage of their Pancake Flight ($10.50). With this option, you get to choose three different kinds of pancake offerings. Oh, the breakfast spot you go to only has two or three kinds of pancakes, not the case at Snooze. Here they have six varieties, plus three kinds of french toast, which you can also include in your pancake flight. I selected the Pineapple Upside Down Pancake, the Pancake of the Day, and the OMG French Toast. The pineapple upside down is a gold medal winner here, with its caramelized pineapple chunks, vanilla cream, and cinnamon butter. No need for syrup with this sweet pancake. The silver medal out of this trio would go to the OMG french toast. Here they stuff brioche with mascarpone, and top it with fresh strawberries, vanilla cream, salted caramel, and toasted coconut. The result is a decadent french toast, which does not overwhelm with sweetness, and a good crunch to the outside, which I liked a lot. The pancake of the day on this particular Sunday was a white chocolate raspberry concoction, which was also pretty solid, but would end up with the bronze medal on this plate.

I really enjoyed my time at Snooze. The food was good, but what made this restaurant for me was the creativity of it. This is not a normal diner breakfast, this is breakfast food with some pizazz. They really made breakfast their own, and it seems to have struck a chord with people. Not sure if it's a wait two hours every weekend kind of food, but every once in awhile for sure. I can definitely see Snooze opening up additional OC locations down the line, which will help alleviate wait times here. I thought the prices were on the high side, but again, this is more of a special occasion kind of breakfast restaurant, instead of every weekend. Service was exceptional on this visit, even with our waitress, Mel nearing the end of her busy shift. She was cheerful and answered all of our queries. I've heard that food can sometimes take awhile to make its way out to the tables, but ours was served in a timely manner on this afternoon. I'll look forward to coming back here again and trying their breakfast pot pie, more of their pancakes, and of course that Cuban-style sandwich. Hopefully, I can get Katie to turn into a morning person again real soon.

Out of five alarm clocks, (because of course all of them have a snooze button, which probably gets used way too much), five being best, to zero being worst, Snooze an AM Eatery gets 3 alarm clocks.

For more information about Snooze, head to their website here: http://snoozeeatery.com/