Is Tustin the New Little Italy of OC? 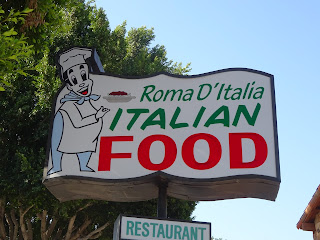 I really enjoy all kinds of Italian food, but I've come to realize that there are two distinct types that are available here in OC. There's fancy Italian food, which is more what you will see in Italy. Restaurants like Prego, Delize's, Andrea, and Antonello's are good examples of this type of Italian, which is lighter with the sauces and cheese, but take a heavier dent out of your wallet due to the authenticity of the ingredients they use.

The second type of Italian cuisine is what I would term, informal Italian. This could best be described as Americanized Italian food. This kind of fare features dishes with heavy red sauces, lots of meat, and items that you would be hard pressed to find on a menu in Rome or Naples. Examples of OC restaurants that fit into this category are Mama D's, Conca De Oro, Angelo and Vinci's, and the restaurant we were going to be eating at on this particular evening, Roma D' Italia in Tustin.

Tustin probably has one of the most underrated collections of Italian restaurants in any OC city. They have both types of Italian spots included within its city limits, along with one of the best Italian markets you will find in OC, Claro's. As far as fancy Italian joints go, you can't beat Pina's Bistro or Barolo Cafe. For more informal Italian spots, they have Ameci's, Pizza Shack, which has been on my list forever, and this place, which was the first Italian restaurant in the city and is still going strong. Roma D' Italia, which opened in 1961, has been run by the Corea family for the last 48 years.

The matriarch, Anna "Nina" Corea passed away in May of this year, but her legacy lives on through her recipes and beloved restaurant that is now being run by her children and grandchildren. The next generation must be doing something right because when we were here, this larger than it seems restaurant was filled with hungry patrons, with much more waiting to be seated on this early Sunday evening at 6. It had been about twenty or so years since I had last eaten here, but I was looking forward to seeing if they could continue our hot streak of very good Italian restaurants in Tustin. 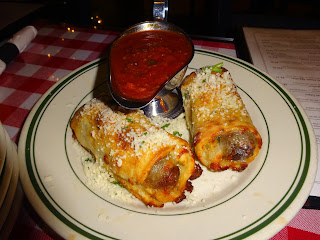 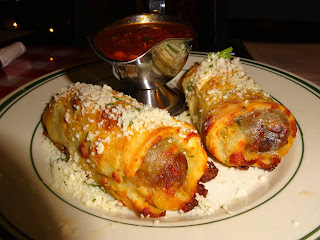 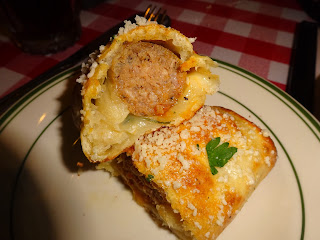 Since we were waiting patiently for our friends Angel and Rebekah to arrive, we decided to start with this Sausage Bread ($9.75). Too bad they showed up as this made its way to our table because we had to share this delicious starter. For this one, they wrap their pizza dough around a mild sausage, and bake it with mozzarella cheese, and then brush the top of it with butter and Parmesan cheese. It's served with a very good meat sauce, or if you prefer ranch dressing. Not overly greasy like other versions I have had, I was pretty impressed with this, and it got me excited for the rest of my meal at Roma D' Italia. 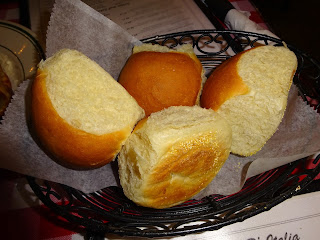 I almost forgot to share the bread that comes to the table before every meal here. I liked this bread, it was freshly baked and was a great vessel for sopping up any extra sauce left on your plate. It was also good with the provided butter as well. 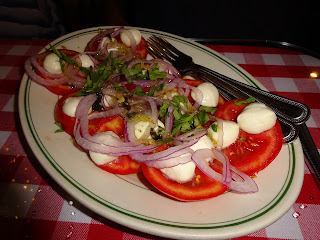 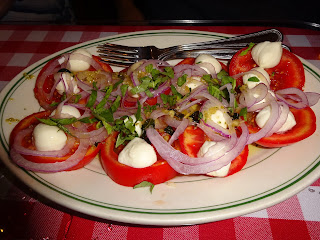 Both Rebekah and I sat this one out since we are not really big fans of tomatoes, but Angel and Katie loved this Caprese Salad ($10.95). Even I have to admit that the bright colors of the ingredients of this salad really brought this to life. Each slice of vibrant red tomato was topped with a small ball of buffalo mozzarella, which was ringed by red onions and topped with basil, garlic, and olive oil. I did try a little of the mozzarella and it was one of the creamier that I have had in awhile. 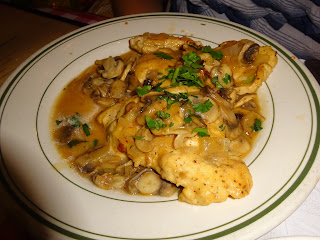 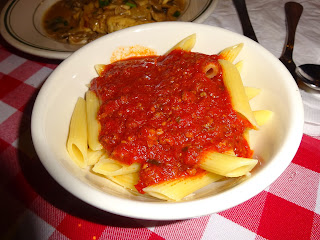 Entrees were up next, and we might as well start with Rebekah's selection since she did not have any of the Caprese. She ordered this good looking Chicken Marsala ($16.95). This traditional Marsala dish included chicken breast, mushrooms, onions, and a very tasty Marsala wine sauce. I tried a bite, which included a very tender piece of chicken and that very good sauce. A very comforting dish. This was served alongside a side of mostaccioli with meat sauce, which I did not try. 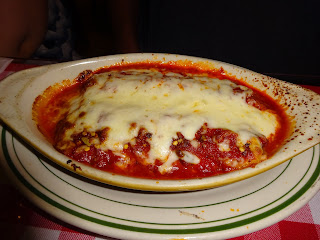 I've come to the conclusion that baked pasta dishes photograph almost as well as burritos, which is to say that they are not very photogenic, but they are usually delicious. Angel felt that was the case here with this Cannelloni ($13.95).  Two pasta crepes are filled with ground veal, and then topped with a generous amount of mozzarella, meat sauce, and Angel asked to have some red pepper added, which they obliged. He was pretty pleased with this dish and called it one of the better ones he has had. He thought there was plenty of meat included in here, and liked the hint of spiciness that the red pepper flakes provided. 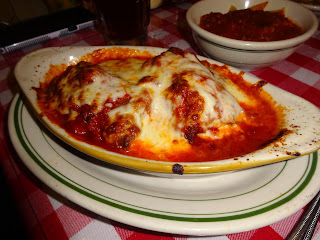 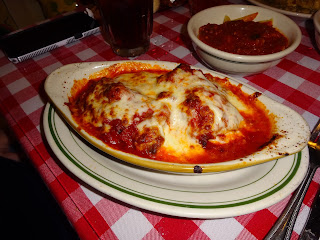 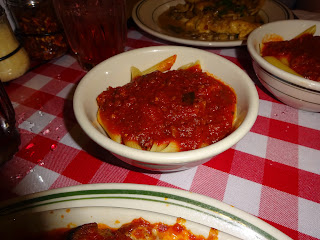 Again, not the most picturesque food photo you will ever see, but Katie was pretty happy with this Eggplant Sorrentino ($13.95) at Roma D' Italia. With this plate, they start with rolled up eggplant, which is then filled with ricotta, mozzarella, eggs, Romano cheese, herbs, and then topped with plenty of meat sauce. Kind of like a lasagna made up of eggplant. Katie really liked this original dish and did not miss the presence of noodles, which helped make this more of a low carb option than it otherwise would have been. She ate the side of mostaccioli sparingly because the eggplant was so filling. 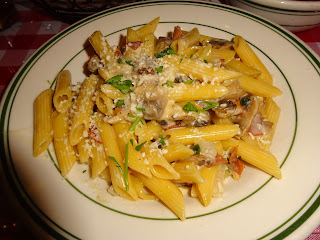 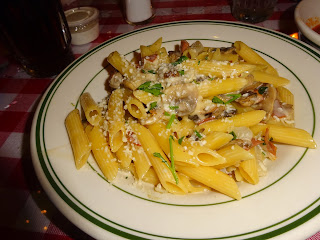 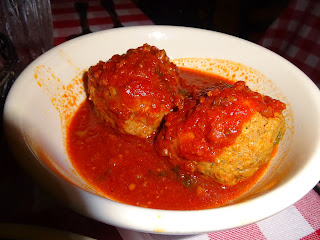 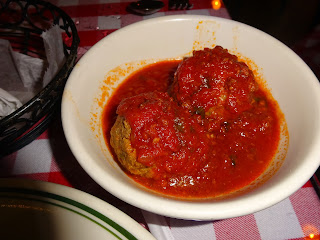 Yes, this was all mine. I have a bad habit of almost always ordering a side of meatballs when getting a new pasta dish in a restaurant. I feel that if I'm not a fan of the pasta dish, I can usually doctor it up with extra meat and red sauce. I did not have to do that with this Penne Amore ($13.95). The penne is sauteed with mushrooms, onions, and prosciutto, with a Marsala sauce, and finished with a sprinkle of Parmesan. This was a good dish, but I wish the sauce was a little more prevalent, as it was a little on the thin side. The rest of the plate was good, with plenty of prosciutto. Since I did not mix the red sauce and meatballs into my dinner, I ate them separately. Very tender meatball, which melded nicely with the delicious sauce. I liked this meal, but would probably explore more of their menu on future visits.

All four of us left Roma D' Italia full and satisfied. There's really a family feel to this restaurant, and not just because there are so many families eating here. You can feel the family atmosphere in the food and service as well. This is good, stick to your ribs Italian food. Sure, some might scoff that this is more Americanized Italian cuisine, but that's what I crave sometimes. Not sure why they have closed their other two locations that were once in Orange and Ladera Ranch. It seems like this is the kind of Italian restaurant which would work in any neighborhood, including Italian rich Tustin. This will not be our last trip to Roma D' Italia.

Out of five footballs, (because at one time Tustin High School had the most active NFL players in the league, and I'm also pretty excited for the NFL season to start), five being best to zero being worst, Roma D' Italia gets 3.5 footballs.

For more information about Roma D' Italia, head to their website here: http://www.romaditalia.com/