Acquiring A Taste for Authentic Italian at Angelina's 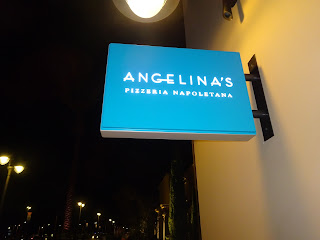 I think I've written this before, but going out with fellow food bloggers is kind of tough. We all have our list of restaurants that we want to try, and we almost fight for who will pick the restaurant we eventually end up eating. This is what happened when we went out with our friends Tom, of the wildly popular Tom's Foodie Blog, and Daniele of Dani's Decadent Deals. They asked for a list of places I wanted to go to, and then Daniele picked her own place, which just so happened to be Angelina's Pizzeria.

I must admit that I had never heard of this restaurant before. After Daniele told me where we would be eating, I did a little research and was surprised that I had not heard of Angelina's before. They have been open in Dana Point for close to four years now, but they really started to get a lot of press when they opened up this new Irvine location, which is in the new Los Olivos Marketplace, just across the freeway from the Irvine Spectrum.

This new location of Angelina's has been open since April and received a glowing review from one of the most trusted restaurant reviewers in OC, Edwin Goei, from the OC Weekly. He really raved about this place, so I was put a little more at ease by Daniele's selection this evening. Along with Edwin's glowing review, Angelina's has also been mentioned numerous times in Modern Luxury Magazine, Orange Coast Magazine, and even a review by the Gossiping Gourmet in the Huntington Beach Independent.

Angelina's is run by a pair of Italian guys. Chef Sandro Nardone formerly of the Naples area heads the kitchen, while Antonio Bevacqua is the Chief Operating Officer, and he hails from Tuscany. Professionally he spent time at Il Fornaio, along with a stint with the Patina Restaurant Group. There Yelp reviews are littered with words like, "authentic", and "real deal Italian." I must admit, I'm more partial to American style pizza, with lots of cheese and toppings, but I'm always game to try a new restaurant.

We arrived here at just before 8 pm on a recent Saturday evening and were met with about a fifteen-minute wait. Luckily, Tom and Daniele got here before us and had put our name on the list. They wanted to sit outside on the front patio, due to Daniele feeling a little queasy. She would eventually spend our whole meal out in the car, and the result was one of the better times we have spent with this fantastic couple. I'm kidding of course, (or am I?).

With Daniele out of the picture, we quickly made our picks off the menu at Angelina's. The menu, as you would expect is pizza driven, with them divided by no sauce pizzas and red ones. There are a good number of starters and salads to choose from, but less in the way of pasta dishes and main courses. I imagine that most people come here for the pizzas, so let's see what we thought of our time at Angelina's. 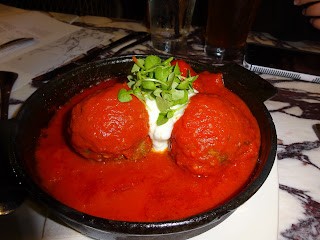 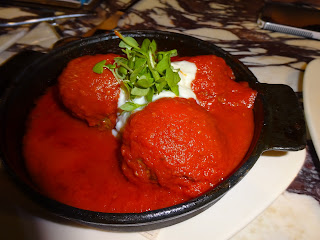 I've been on a real meatball kick lately, so I figured that I'd give this Polpette Al Sugo ($16) a try to start things out. I'm really glad I did. Three meatballs were bathed in San Marzano tomato sauce and topped with a little bit of burrata and basil. These were very tender and full of flavor. Their sauce was to die for, and the only thing to make this even better would be if they added more of that very good burrata. One of the better meatball dishes I have had, and it made me wish they had a meatball sandwich on their menu. 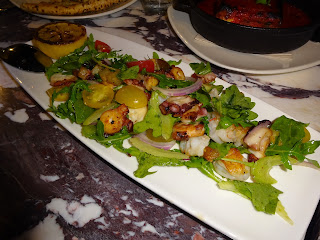 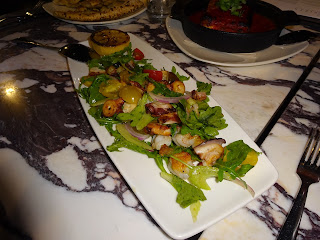 Tom selected this Polipo and Shrimp Salad ($18), which was a special on this evening to start with. This salad is not on their online menu, but judging by the number of pictures of this on Yelp, it seems to be available rather regularly. For those of you that don't know, like me, polipo is Italian for octopus. So this was basically a seafood salad, which also featured a good amount of tomatoes, red onion, and arugula. Tom loved this salad, and would totally get it again. He thought the octopus was done nicely, and the shrimp was delectable. 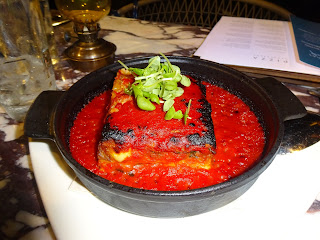 As if we did not have enough food before our entrees came out, Katie wanted to try this Melanzane Alla Parmigiana ($13). She was very happy she did. Even as I write this, a month after the fact, she can't stop raving about this square portion of eggplant drenched in Pomodoro sauce and topped with a fresh sprig of locally grown basil. She described this as eggplant lasagna, without the guilty feeling of having noodles. She tossed around words like, "fantastic", "flavorful", and "hearty, without being heavy." She could not see herself coming to Angelina's, and not having this starter. 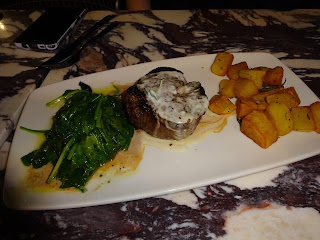 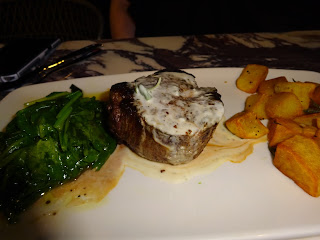 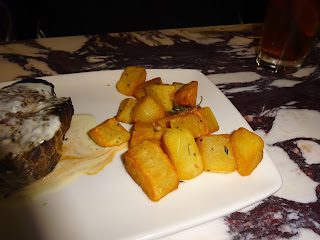 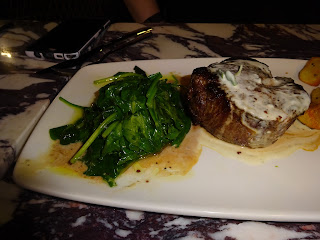 Since we're talking about Katie's food, we might as well talk about her meal also, which was a special on this evening, the Filetto ($40). This filet was delicious, even though she ordered it medium well. It was topped with a Gorgonzola sauce, which boosted the flavor profile of the usually tender, but sacrificing flavor filet. The filet was sandwiched between roasted potatoes and a side of spinach, which Katie felt both were kind of unremarkable. 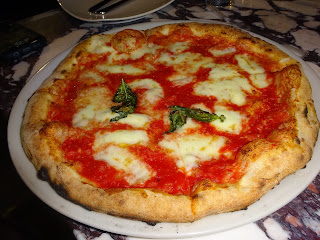 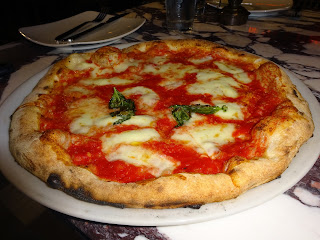 Both Tom and I opted for pizzas, and we'll take a look at his Margherita DOC ($18) first. There are two versions of a Margherita pizza on Angelina's menu, and I finally learned the difference between the two. One uses cow's milk to make the mozzarella, and the other, the one that is above, is made with buffalo milk mozzarella. See, even after doing this for seven years, there is still so much for me to learn. Tom must have enjoyed this pizza, as he tore this up, or was he just trying to eat fast to get back to his wonderful wife, who was sawing logs in the car? 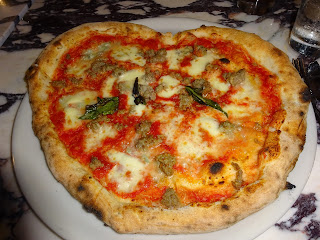 As I stated before, I'm usually not a big fan of this authentic, Napoletana style pizza, but I gave it another shot at Angelina's on this evening. I was torn between two, and with a little help for our waitress, I settled on the Saporita ($18). I'm glad I did. This one featured some big-time flavor, which was provided by the inclusion of Gorgonzola cheese, mozzarella, and sausage. It was finished off with their very tasty Pomodoro sauce, extra virgin olive oil, and a light smattering of fresh local basil. The crust here was not as soggy in the middle as others we have had, and it was cooked all the way through, but still had a little chew to it. Of course, it could have used a little more sauce for my taste, and I'm always up for some extra cheese, but this was probably one of the best versions of this style of pizza I have had.

Not only was this a nice and quiet evening, with our friend Daniele in the car, but Angelina's also proved that they can make an authentic Italian pizza that I will enjoy. It's not going to replace my love for more Americanized pizzas, with all of that gooey cheese, extra sauce, and tons of meaty toppings, but I'd definitely come back to have this pizza again with no qualms. Both Tom and Katie also felt that this was a very solid place to experience authentic Italian, made with recipes you would find in that boot-shaped country. Service was pretty stellar on this evening, with our waitress, Maria giving us the lay of the land here, and answering all of our inquiries. I did feel that the prices here were a bit on the high side for the amount of food that you receive, but I understand the ingredients used here are of a higher quality than what most other restaurants use so this might be more of a special occasion restaurant for most of us, including myself. Special occasion or not, Angelina's taught me that I can appreciate real Italian pizza, and also a peaceful night with Daniele.

Out of five tourists, (because the most famous Angelina in the world is Angelina Jolie, who was in a movie called, "The Tourist", and you'll feel like you're touring around Italy eating this pizza), five being best to zero being worst,  Angelina's Pizzeria Napoletana gets 3.5 tourists.

For more information about Angelina's Pizzeria Napoletana, head to their website here: https://angelinaspizzeria.com/
Posted by OCEater at 7:22 PM