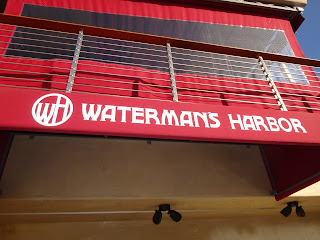 OC Restaurant Week always seems to go by way too fast, and it always seems like we have a bunch of other commitments when this restaurant bloggers dream week finally gets here. This year we made it to two restaurants out of the over 140 restaurants that participate in restaurant week. Not a very good ratio, but there are only so many meals one can consume.

Since we only had two opportunities to dine at these fine restaurants, I limited where we would be going to, with what was on my now growing restaurant wish list. I had jotted Waterman's Harbor down when I read that the OC Register's Restaurant Reviewer, Brad Johnson raved about a great burger he had here, and when I saw the great review this restaurant received from Orange Coast Magazine, it made me take notice. What cinched our visit here was when I saw their pretty impressive restaurant week menu. I immediately made reservations, so we wouldn't miss out on our opportunity to experience restaurant week at Waterman's Harbor.

Waterman's Harbor has been open for a year and a half, and they took over the old Jolly Roger spot right in the heart of the Dana Point Harbor, right where people board the Catalina Express to take the 26 mile trip across the deep blue sea. Their Executive Chef, Mike Doctulero is formerly of Scott's Seafood in Costa Mesa, so he definitely knows his way around this seafood focused restaurant.

I was a little skeptical when arriving here, because usually when views are this nice, restaurants sometimes skimp on food, expecting people to be distracted by the ocean breezes and views. We were sat on the partially covered patio on this Sunday afternoon. There was a singer in front of the restaurant because the Festival of Whales was going on this particular weekend. There was a wait time of about thirty minutes for a table, which I assume is result of the increased crowds during this popular festival in the city of Dana Point. There were lots of people enjoying the weather, and enjoying their Sunday Funday.

The menu at Waterman's is predictably seafood focused, but there's also a few steak, chicken, and salad options for non-seafood lovers. We of course were here for their $20 three course menu, which also included a specialty cocktail. A very good deal, and one that showcases some of their regular menu items. I like when restaurants use their regular menu items on their restaurant week menus, as it's a truer interpretation of what the restaurant is truly like. Let's see what Waterman's Harbor is truly like by checking out their food. 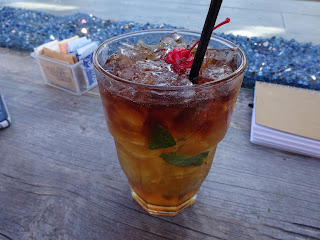 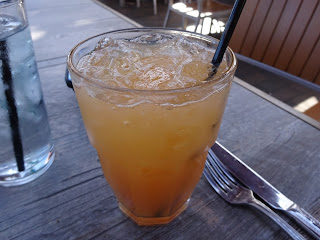 Since Katie does not drink more than a sip of alcohol at a time, both of these specialty cocktails were mine to guzzle during our stay here. No idea who Mr C is, but I enjoyed their Mr. C's Old School Mai Thai very much. Made with Cruzan rum, mint, lime, orgeat syrup, Lahina dark rum, and garnished with a cherry, this version was a little less sweet than usual. The orange flavor was toned down a bit, and this went down rather easily. Usually with mai thai's I get tired of them rather quickly, but I could see myself having quite a few of these at a time. The other drink I had here was the Waterman's Punch. This fruity cocktail was comprised of Sailor Jerry Spiced Rum, Malibu Rum, blackberry schnapps, flor de cana dark rum, pineapple and orange juices. This was a very lively beverage that if you are not too careful with, could really sneak up on you. A drink that I could easily imagine having before boarding the nearby Catalina Express to start off a great weekend in Catalina. After these two cocktails, I definitely needed something in my stomach, and luckily the appetizers were coming up next. 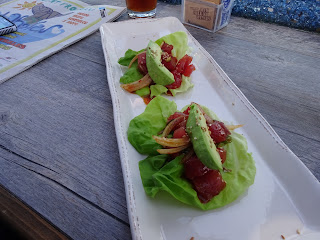 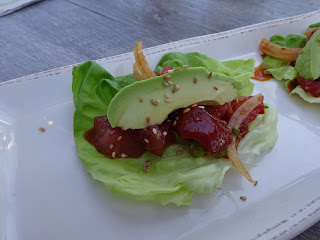 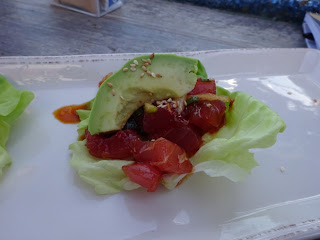 Each section of the restaurant week menu had two selections to choose from, so I knew Katie would be getting the Ahi Poke Lettuce Wraps. The ahi was seasoned with sesame, scallions, and a soy chili sauce. This gave the tuna a slight spice to it, and the fresh avocado slice helped cool this down a bit. Lettuce wraps are always a little awkward to eat out of, and this was true at Waterman's as well. I eventually just forgot about the lettuce, and ate the very fresh ahi with my fork, which did not diminish this appetizer at all. 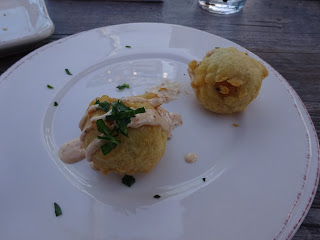 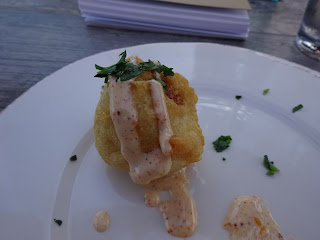 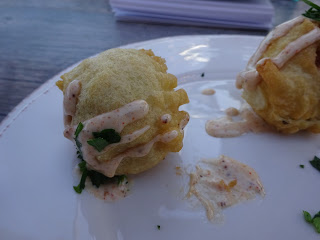 Since Katie had the ahi, this freed me up to have these Crab Beignets. These little balls of crab were very tasty. The outer pastry was not as heavy as I thought, which allowed the crab inside to be the star of the show. There was plenty of crab in these, but they needed more of the old bay aioli to go along with them. Another good appetizer though. 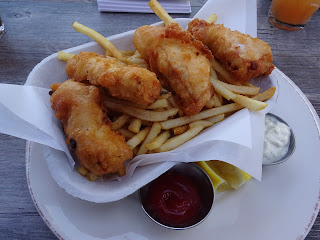 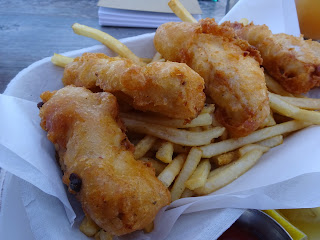 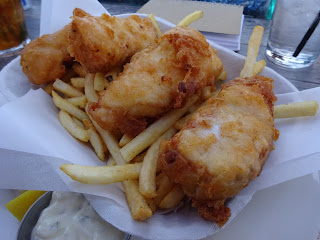 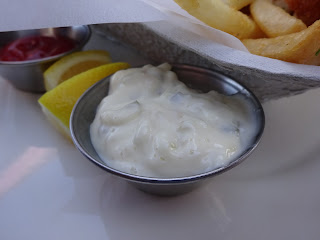 When these Trap Caught Cod Fish and Chips came out, I was pretty impressed with the portion size of this entree. Both Katie and I got this entree, and we both really enjoyed the four pieces of cod that were placed on this plate. The batter used had a nice crunch to it, while not being overly heavy and oily. The cod was very moist, and in some parts, almost too moist. Not sure if they make their own tartar sauce, but it was good, and added to this plate. The fries were good and crisp, and like the fish, there was plenty of them. 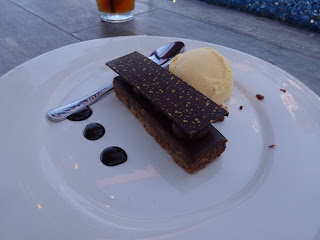 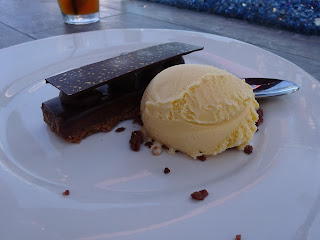 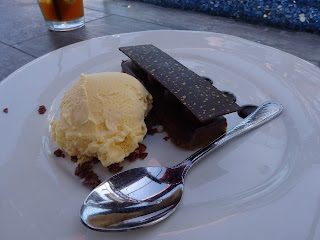 There were two desserts offered, the first of which was this Homemade Kit Kat. I'm usually not into deconstructed desserts, but this one was pretty solid, and I could see where they were going with this. Plenty of hazelnut and brown sugar graham crackers did kind of resemble a Kit Kat Bar, but mainly because of the texture, more than the taste. This came with a generous serving of vanilla ice cream, which did not seem to jive with the Kit Kat theme, but I'm never one to dismiss ice cream coming with dessert. 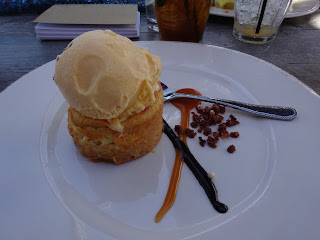 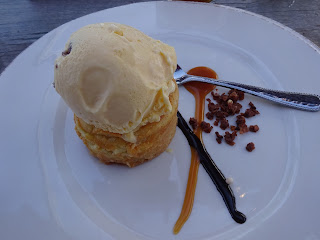 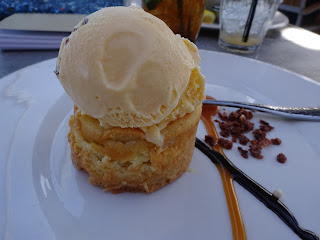 When I see Butter Cake on a menu, I almost always order it. One of my favorite desserts ever, and this one was just okay. On the positive side, I really liked that this had a lot of ice cream topping it, but the cake portion of this was off. It was not as moist as it should be, and the sweetness of it was lacking. Not an awful dessert, but we've had way better versions of this cake before.

Even with the lackluster butter cake closing out our meal, our visit to Waterman's Harbor was still pretty impressive. Even if we did not get this meal for $20 a person, we still would have left here very satisfied. A quick check of their regular menu puts this meal at closer to $40, so be on the lookout for this restaurant the next time that OC Restaurant Week rolls around. Restaurant week definitely had the desired effect on both Katie and I, as we look forward to coming back here to try more of their menu on future visits. Service was shaky at first, as it took a long time for our waiter to greet us, but then the service picked up throughout the rest of our meal. Glad we made Waterman's Harbor one of our two OC Restaurant Week stops.

Out of five fountain pens, (because one of the most famous makers of fountain pens is Waterman, which was founded in New York City in 1884), five being best to zero being worst, Waterman's Harbor gets 3.5 fountain pens.

For more information about Waterman's Harbor, head to their website here: http://watermandp.com/