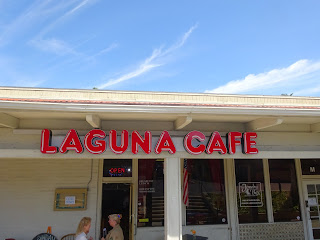 It looks like my breakfast days may be numbered. Due to a lack of people at my workplace, I have been hoodwinked into working on Sunday mornings, the only day that both Katie and I usually have off together to explore breakfast spots. I also have a weekday off, but it's pretty lonely eating the first meal of the day alone.

So now that our Sunday mornings are down to a precious few, we got a hot tip from our good friend CJ that her friend just took over Laguna Cafe, and she wanted us to try it out. Being that CJ's pretty particular about eating out, we decided to head over to the senior laden city of Laguna Woods to try out Laguna Cafe.

This place first crossed my radar when Katie's mom ate here with her father. It was then owned by a seven year military man, who recently sold the business a month and a half ago. Now CJ's friend, Monja White Chavez has taken over, and during our visit in late February, not too much has been changed from the last owner. There's still plenty of military items adorning the walls, and they still have the same menu, although they were working on updating it when we were here.

It's got to be a little scary opening up a business in this shopping center, that has definitely seen better days. They lost their anchor store, a Vons in mid January, and there was not much open when we visited this shopping plaza, which is on the corner of Moulton and El Toro Road, on this Sunday morning around 11. Even with the ghost town vibe in these parts, Laguna Cafe was serving breakfast to a full house, with each of its 11 tables full at one time or another during our stay. This gave me some hope that CJ was on to something here. Let's see if that bore out after we ordered. 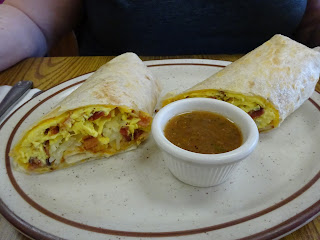 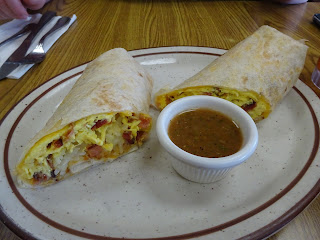 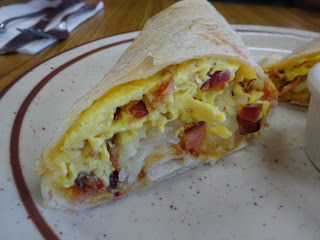 Starting things off is Katie's selection, the Breakfast Burrito ($8.25). This was build your own style, with your choice of breakfast protein; bacon, ham, chorizo, or sausage. Then you have your choice of either hash browns or cafe potatoes, either inside the flour tortilla or alongside of it. The burrito is then finished off with salsa and cheese. Not the biggest burrito we have seen. Katie really liked that this was very manageable, and better than she expected. It lacked a greasiness to it, and was one of the lighter breakfast burritos we have encountered. 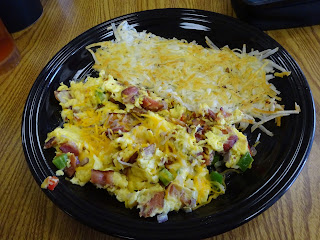 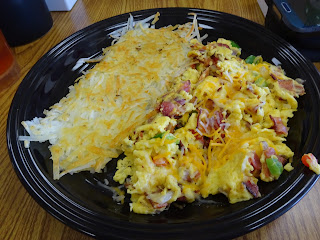 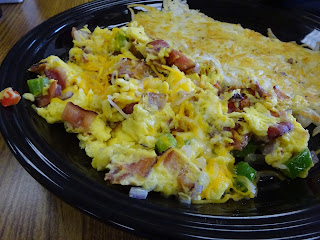 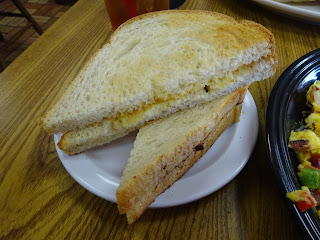 For breakfast, I'm usually drawn to scrambles, and that held true at Laguna Cafe on this late morning. This Bacon Scrambler ($7.25) was made with two large eggs, bell peppers, onion, and cheese. Pretty tasty, and made even better when I added some hot sauce to this. There was plenty of bacon in this, and the cheese did not overwhelm. This came with my choice of potatoes, and I went with hash browns. They could have been a little more crisp, but they were passable. Choice of bread was also offered here, and I went with my old standby, sourdough, which went well with this breakfast. 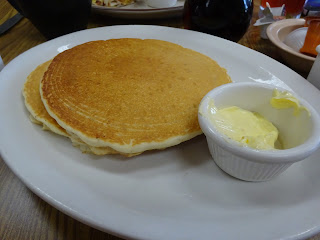 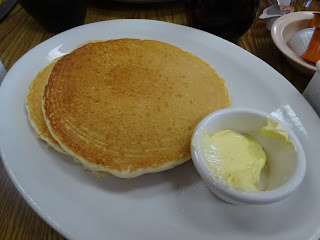 We weren't done yet. When eating breakfast, I like to incorporate a sweet item to compliment my savory one, so we also got this Short Stack ($3.99). These two buttermilk pancakes were pretty good. Not as heavy as some we have had, which is the way I prefer my pancakes. Sometime after eating pancakes, you can feel them just sitting with you the rest of the day, that was not the case with these fluffy ones at Laguna Cafe. They really hit the spot.

Okay, Laguna Cafe is not going to blow you away with their large portions or the originality of their menu, but you will get a solid breakfast at a very good price here. If I recall correctly, there were no items on their menu over the $10 price point, and that's a rarity for a full service restaurant in South OC. Be advised that there are new owners here, and it will be interesting to see how they put their own spin on things here, and in what direction they decide to head. Service was very good on this morning as the owners were out and about making sure everything was okay, and they were very cordial trying to get to know their new customers. A very locals place, but even if you are not a local, you will feel like one when you leave here. Laguna Cafe will definitely be in our breakfast rotation, if I ever get another Sunday off again.

Out of five general stars, (because of the military angle this restaurant has), five being best to zero being worst, Laguna Cafe gets 3 general stars.

For more information about Laguna Cafe, head over to their website here: http://www.lagunacafeandspiritsinc.com/