Swinging By the Vine Restaurant in San Clemente 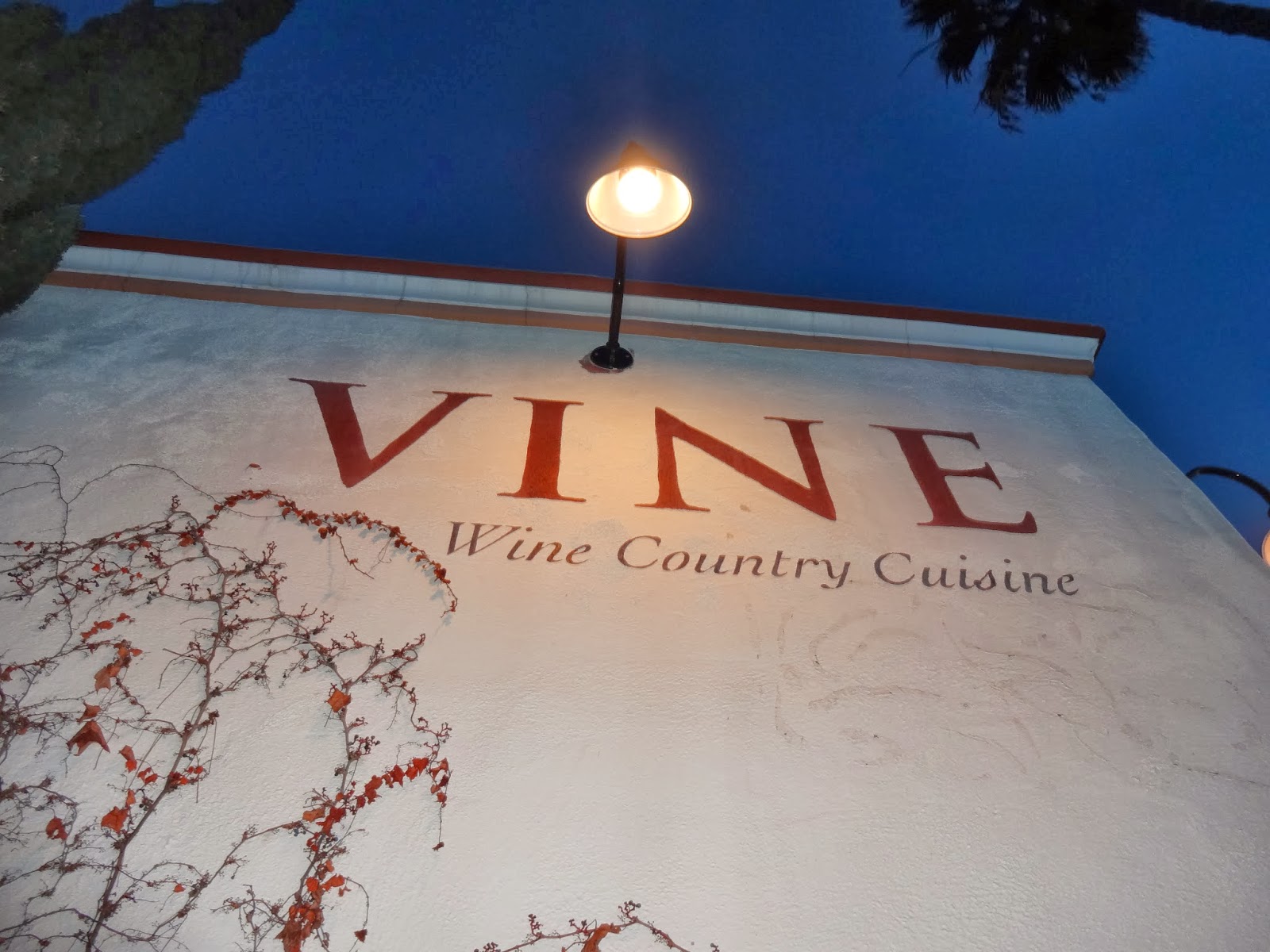 Writing this blog we have met some real nice people that work in restaurants. It seems that almost everyone that we come in contact with has such a passion for what they do, and they want others to experience their fervor for their food or restaurants. One such guy that we always look forward to seeing at his restaurants is, Russ Bendel. We met Russ when he worked at Fleming's at Fashion Island. We were shocked to learn that he had left early last year to pursue new endeavors. We recently learned that one of these new enterprises was Vine Restaurant in San Clemente. As luck would have it, we were recently invited to come down, try some of their food, and of course reconnect with Russ.

Vine Restaurant is located on the very busy, El Camino Real in San Clemente, right across the street from Italian restaurant, Brick, and is a few doors down from Pizza Port. This is not a new restaurant. It has been around for ten or so years, but Russ recently took it over late last year, with a couple of his friends, who each have extensive pedigrees working in the restaurant industry. Add to this trio of friends, Chef Jared Cook, who previously ruled the roost at Crow Bar and Kitchen in Corona Del Mar, along with two other stints at Vine, but now he's back here as Executive Chef. He was very proud showing off his garden on the hillside behind the restaurant, which helps inspire many of the chef specials on many nights.

We got to Vine at 3PM for our Media Lunch, with many of our favorite food writers in attendance, we knew we were going to be having a great time. Vine is only open for dinner, starting at 5:30 during the week, and 5PM on weekends. Make a special note that they are closed on Mondays. I hate showing up to a restaurant, and finding out that they are closed on that particular day. 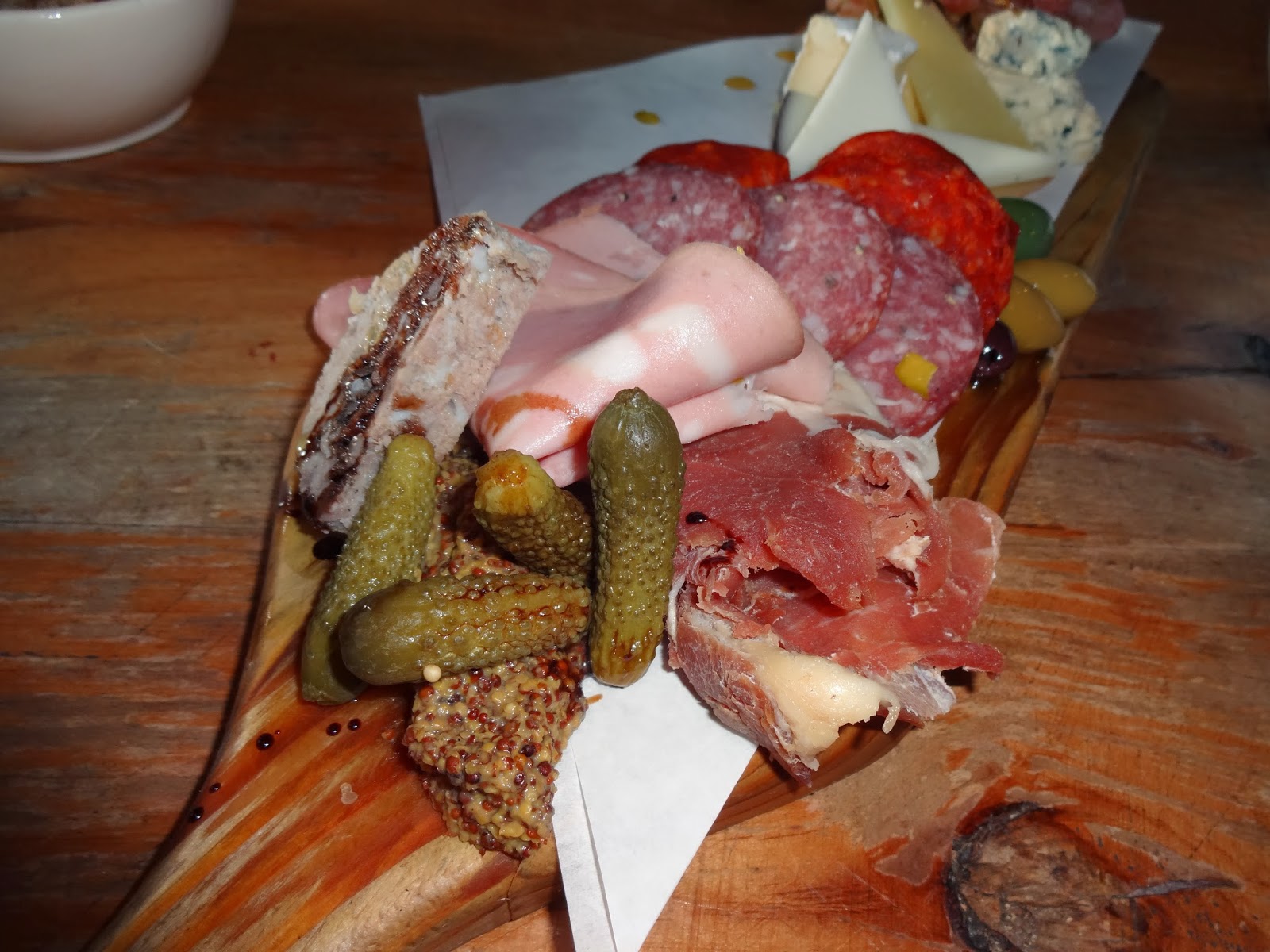 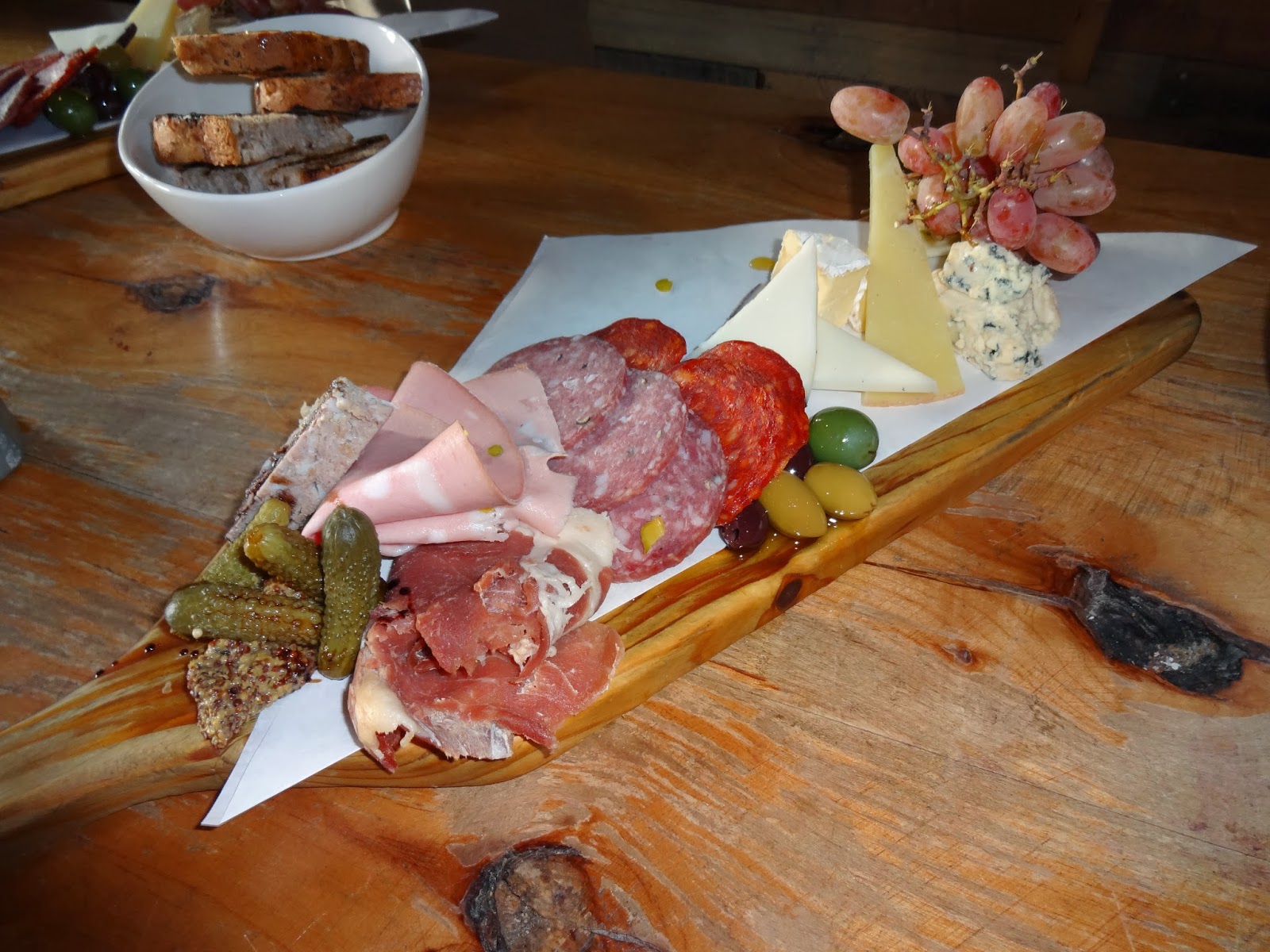 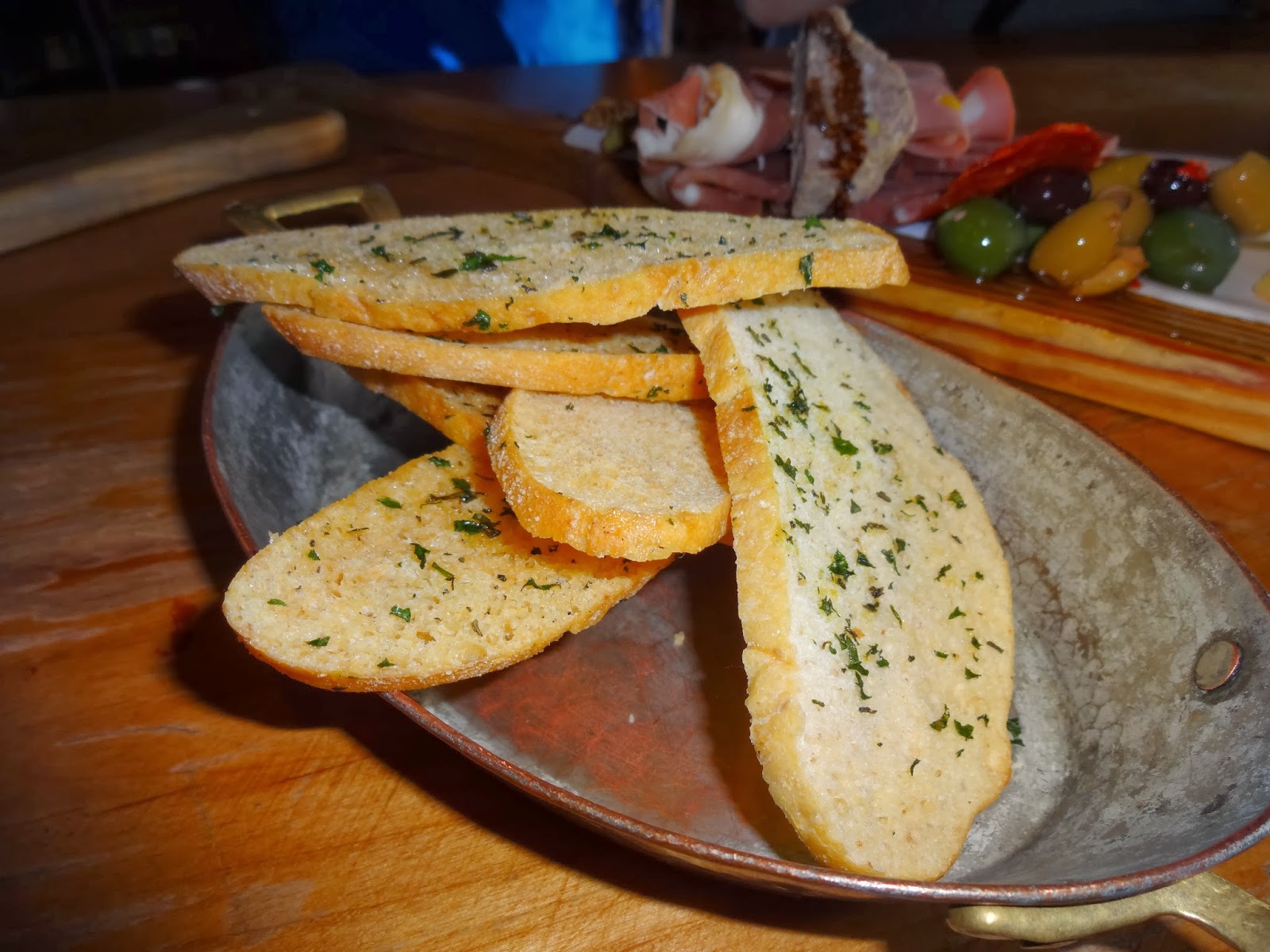 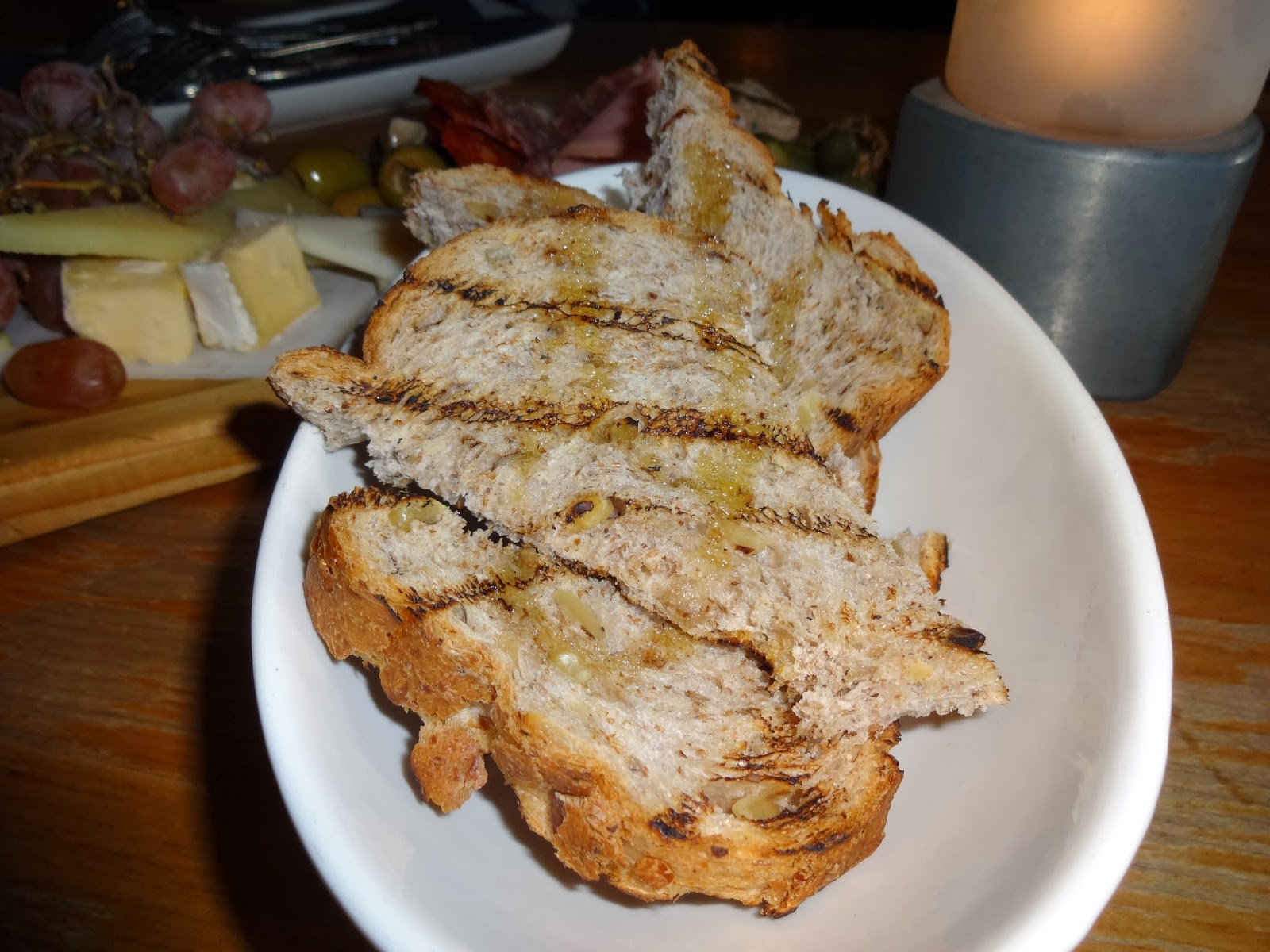 When walking into Vine, the bar will be to your right, as well as a look into the kitchen. There are high top tables along the left hand side of the room, which is where they had placed good looking Charcuterie Boards ($18 for a full order, or $10 for a half order), for us to enjoy. I am not too much into the sliced cheeses, but the domestic cured meats were very good. I really enjoyed the pepperoni and the proscciutto naturally. 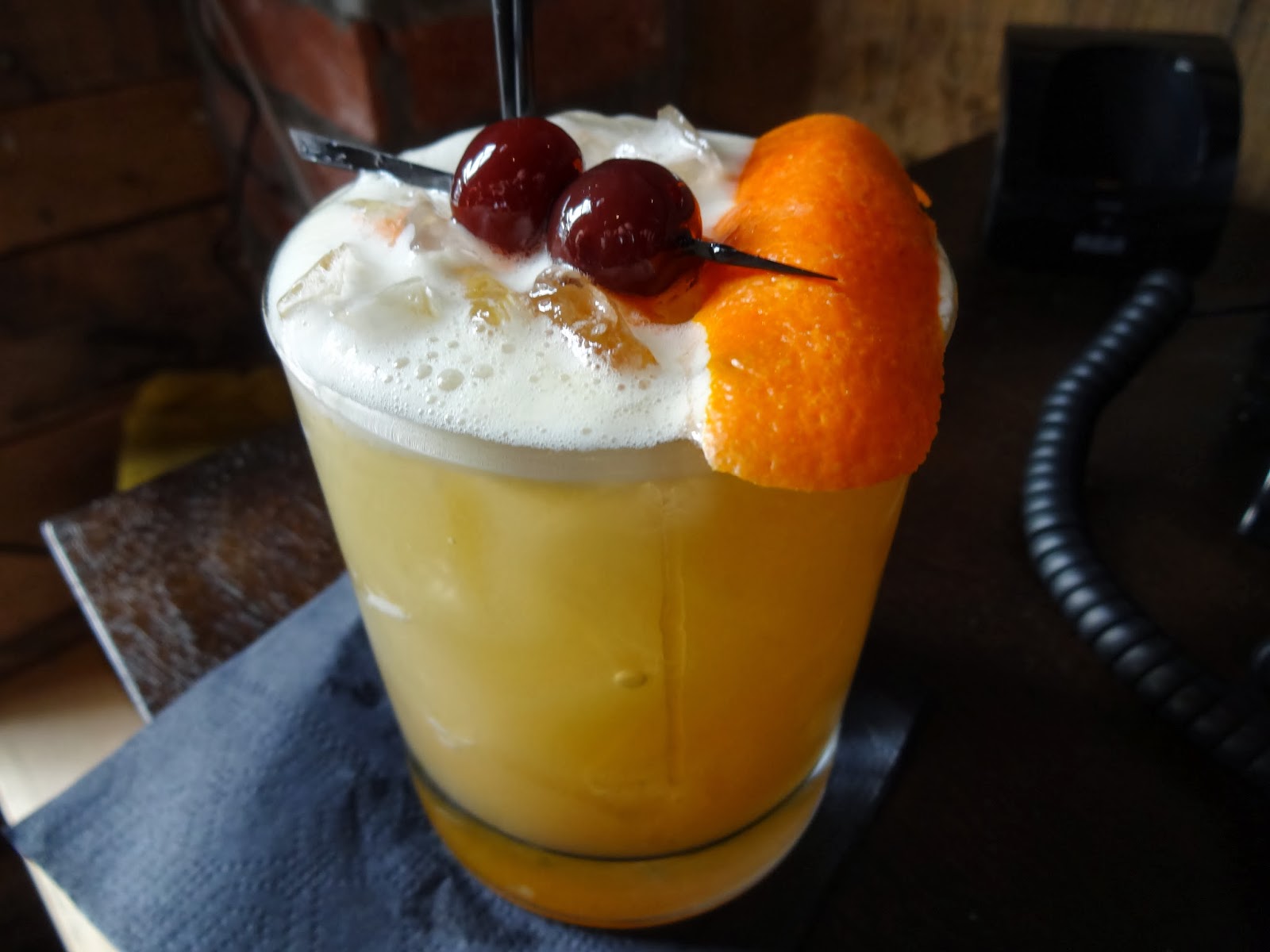 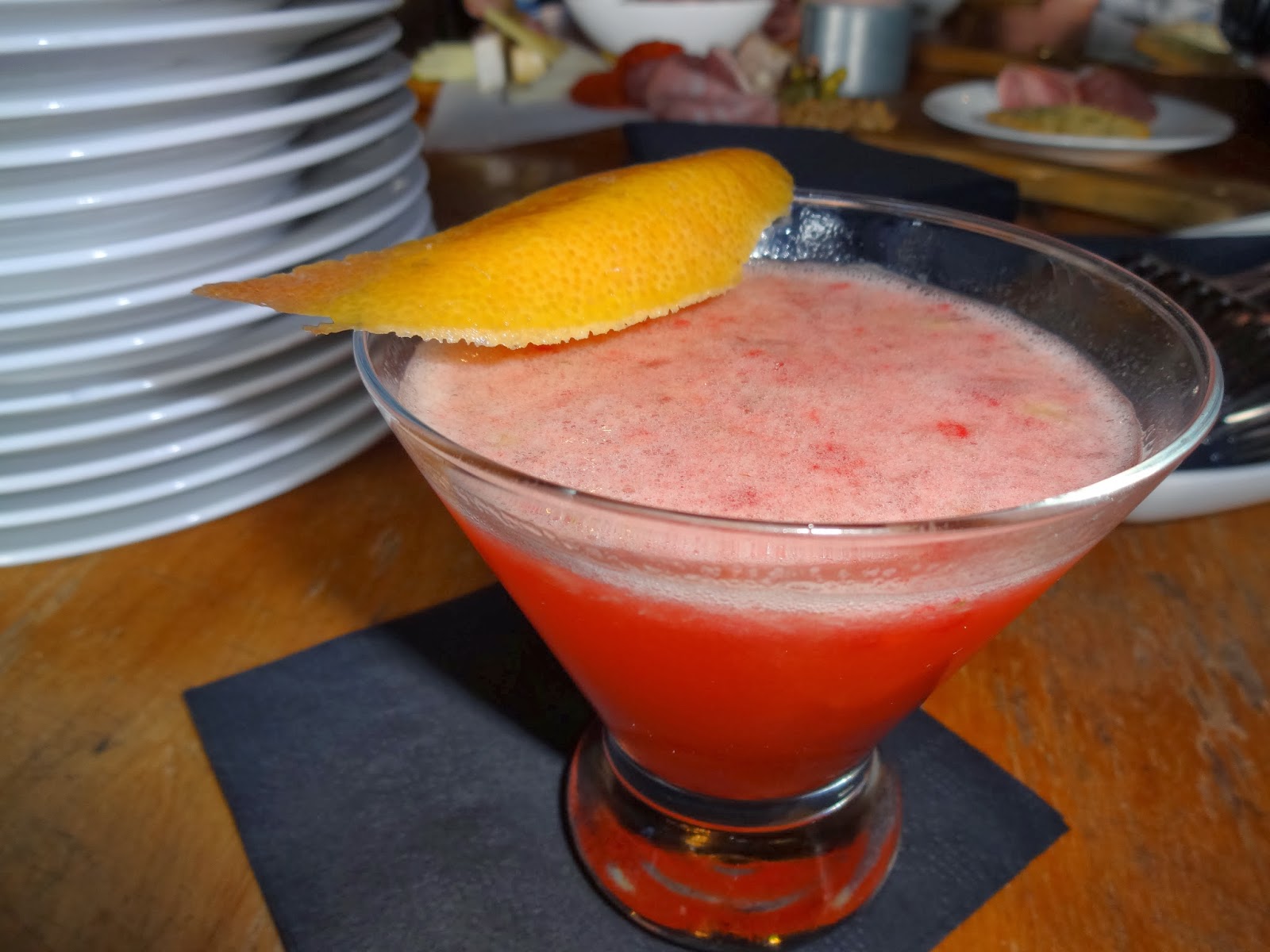 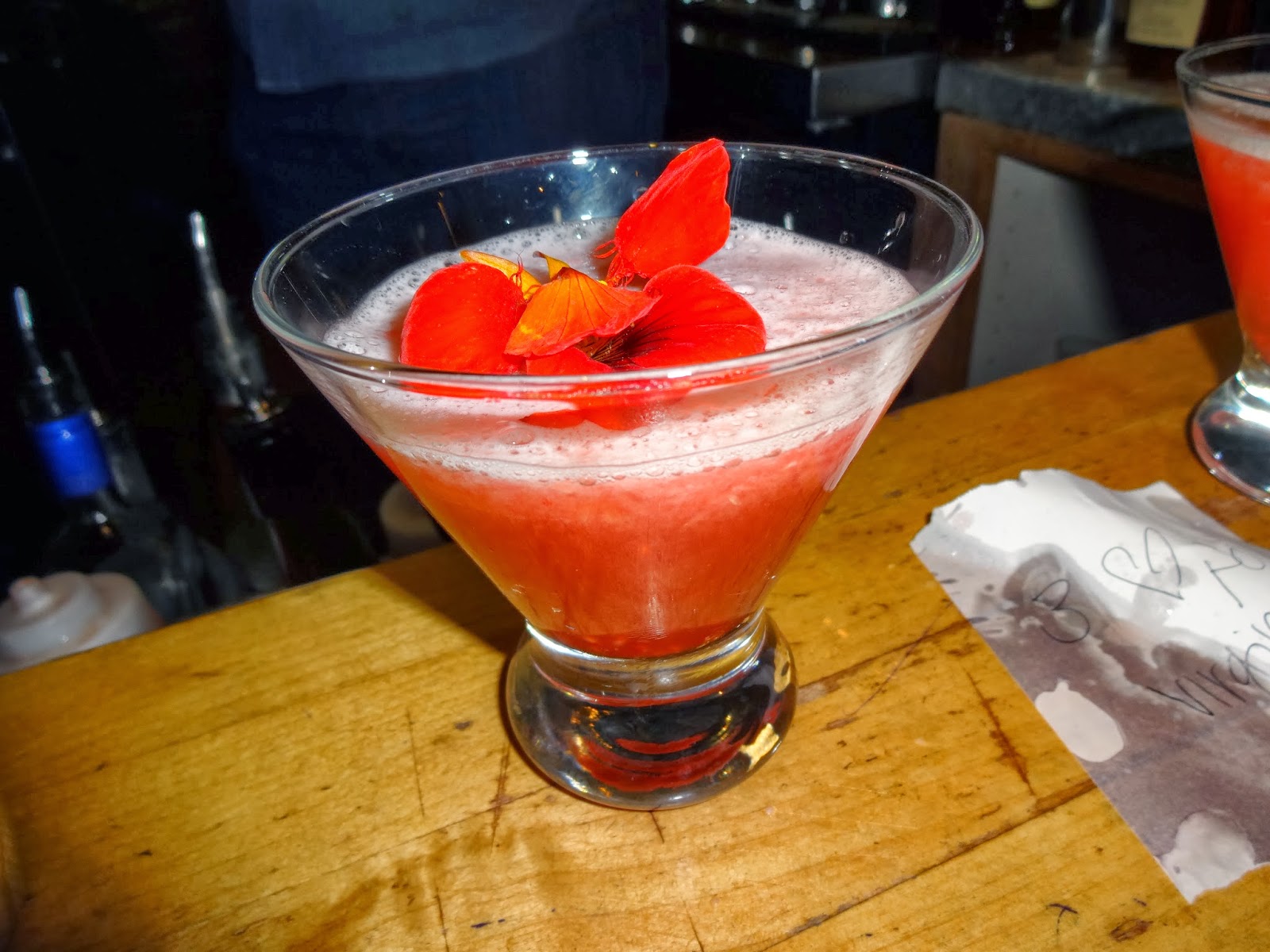 The man in charge behind the bar is the very personable Gabe Whorley. Gabe has been in the restaurant industry since high school, and has a ton of experience tending bar. He worked alongside renowned mixologist, Gabrielle Dion at Charlie Palmer. Gabe uses fresh herbs and fruits in many of his cocktails. We were lucky enough to try two of his craft cocktail creations. The Flaming Buffalo ($10) is made up of the unusual combination of Serrano chili's, lemon, egg, and bourbon, and is then garnished with an orange peel and two cherries. I am not too much into bourbon, but this cocktail was delicious. The bourbon did not overpower, the egg kind of made this frothy, but I did not get much from the Serrano chili. Katie had the more fruity option, the Love Potion #9 ($10). This one used vodka as a base, then went with orange liqueur, lemon, cucumber, and raspberry, with an orange peel as a garnish. I was afraid this would be too sweet, but the cucumber and lemon probably helped keep this drink in check. Gabe even made Katie a virgin version of this drink, which he topped with an orange flower. Not into craft cocktails? Vine has 10 craft beers on tap, along with 25 wines by the glass, so there's something for everyone here. 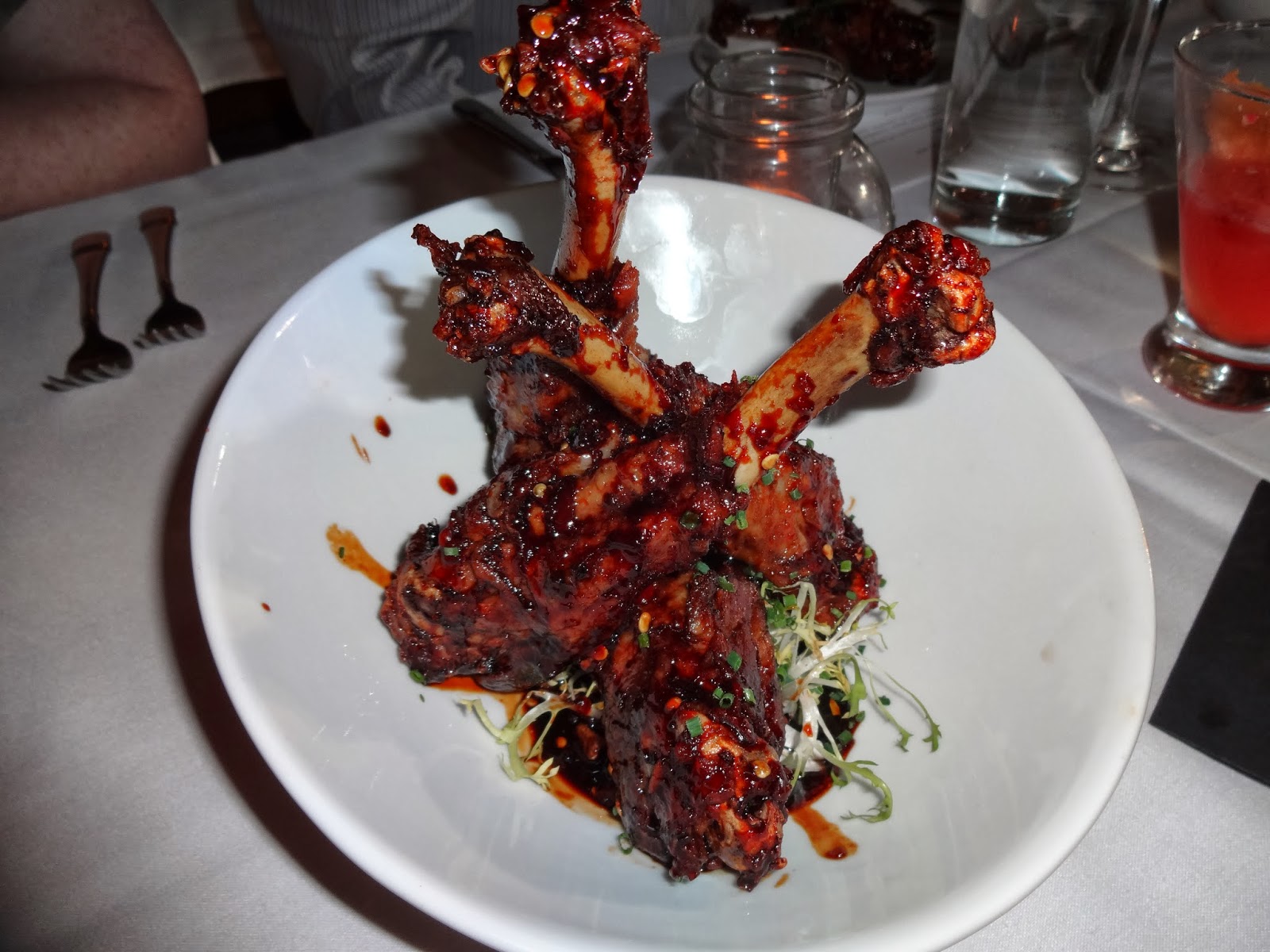 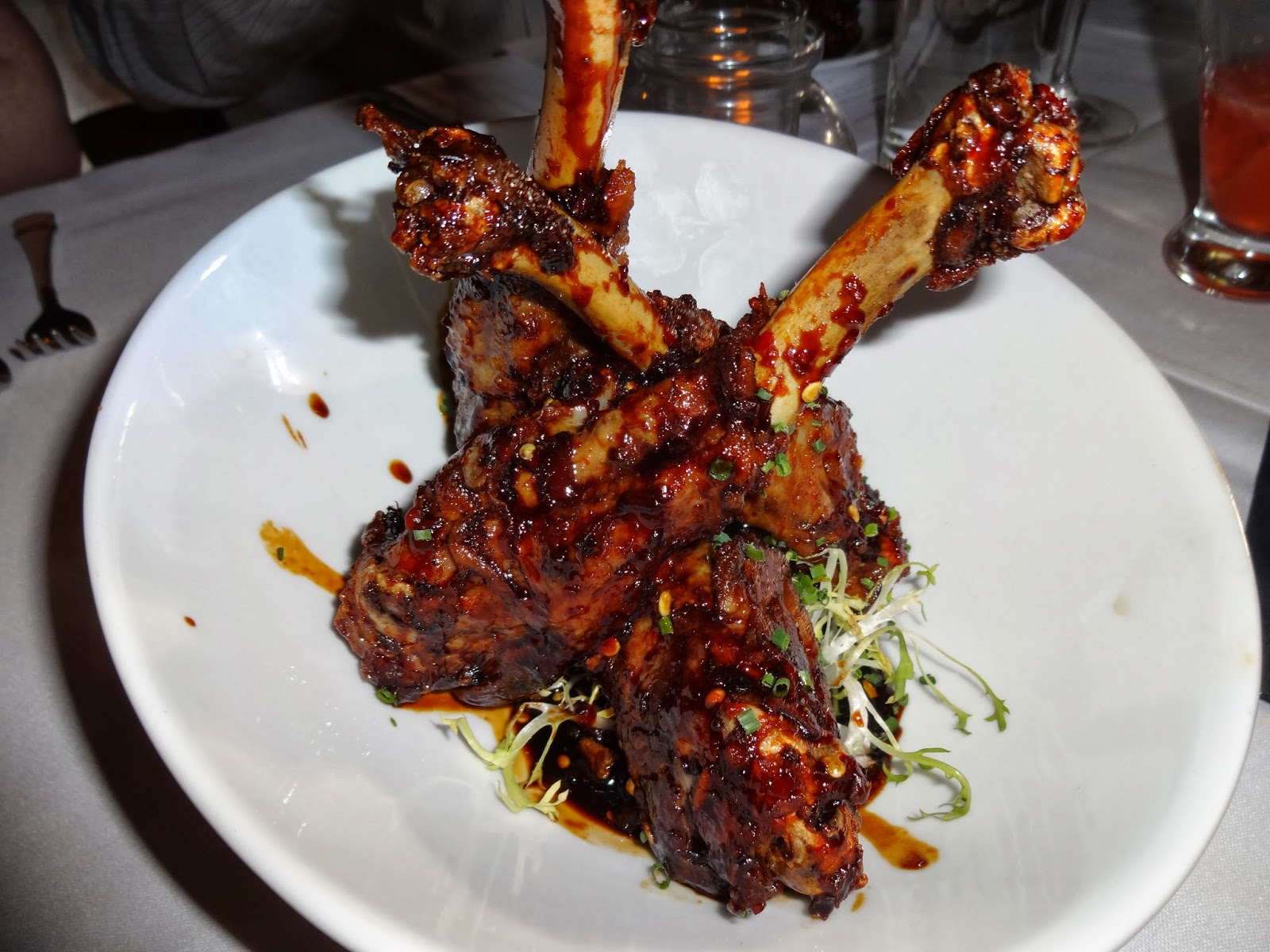 After having our drinks and charcutrie, we went into the dining room for the next stage of our meal. First up was a very unusual item, Crispy Meyer Lemon and Honey Duck Wings ($14). We eat in a lot of restaurants, and I can not recall ever seeing duck wings on a menu. These were topped with a chili sauce and chives. They are butchered exclusively for Vine, and I will definitely be back for these. This duck was not as greasy as others can tend to be, with a nice crispiness. The chili sauce was not crazy overpowering, and allowed the natural smokiness of the duck to shine through. Obviously more meat than a buffalo wing, these were one of the highlights of our meal here. 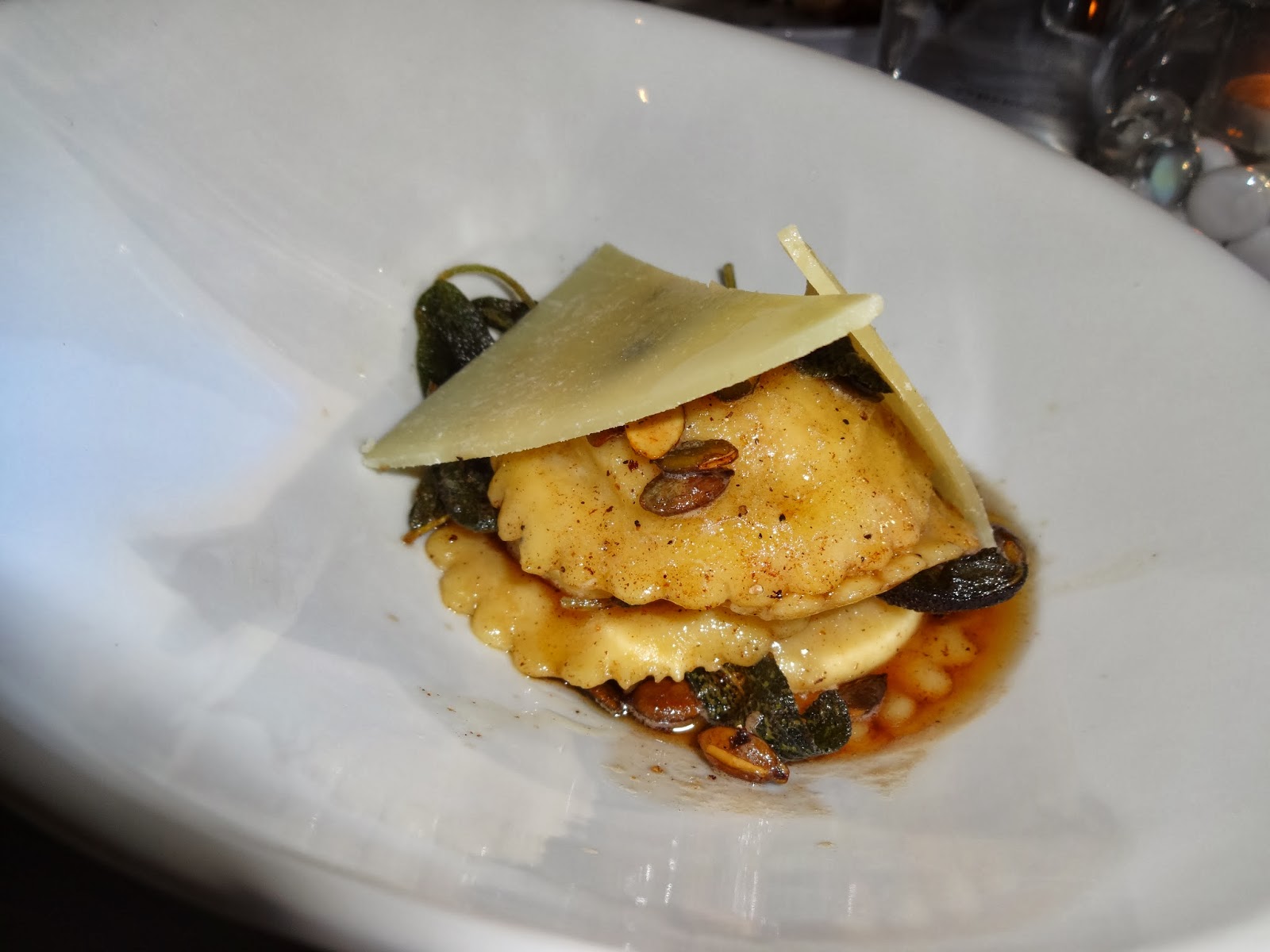 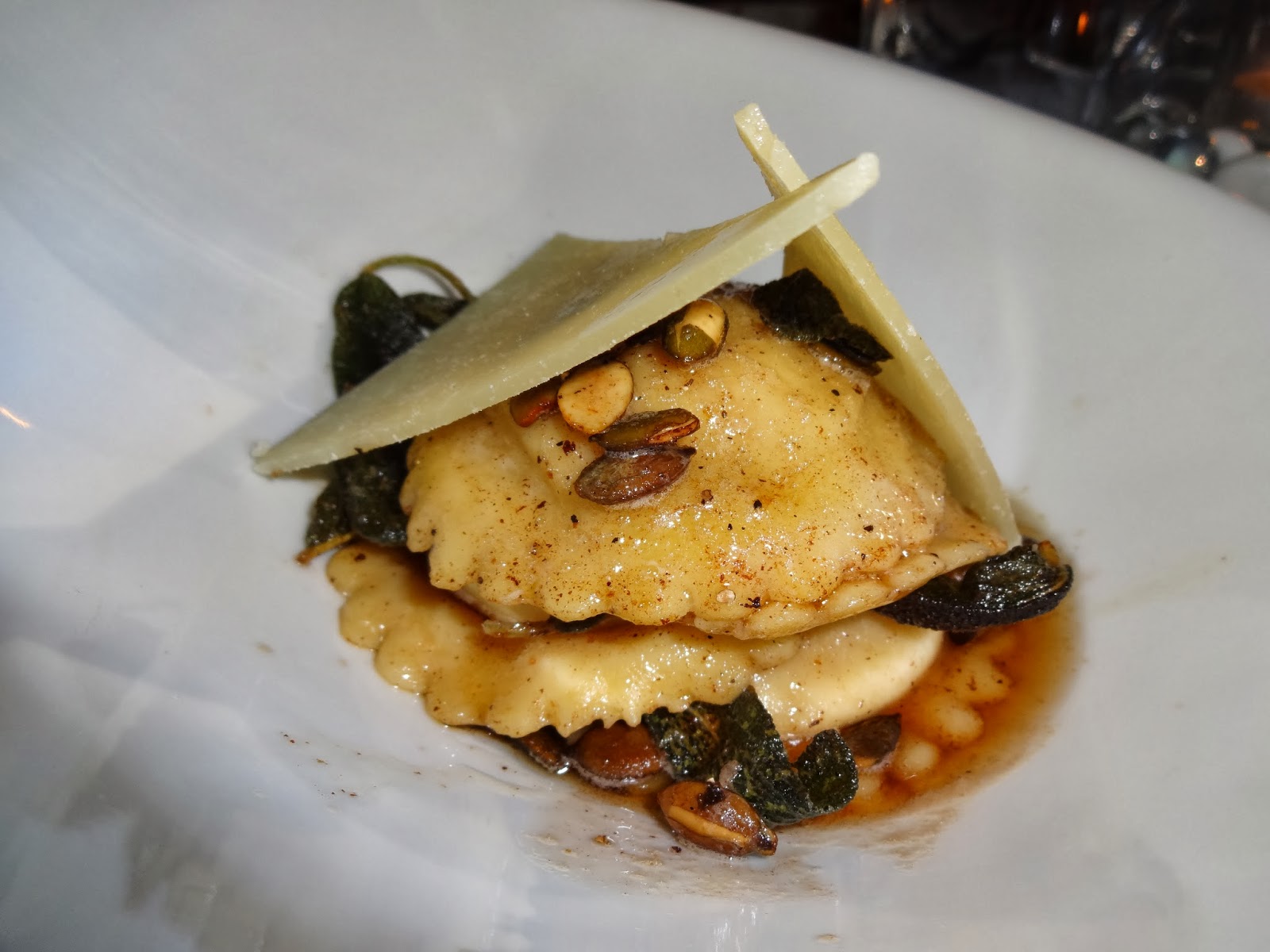 The second part of our appetizer course was this House Made Pumpkin Ravioli ($13). Accompanying the pumpkin ravioli was a white truffle brown butter, crispy sage, and pecorino. I thought this ravioli was very well made, but a little too subtle for my palette. What brought this to life for me was the pecorino, which added a big boost of flavor that brought this appetizer to life. 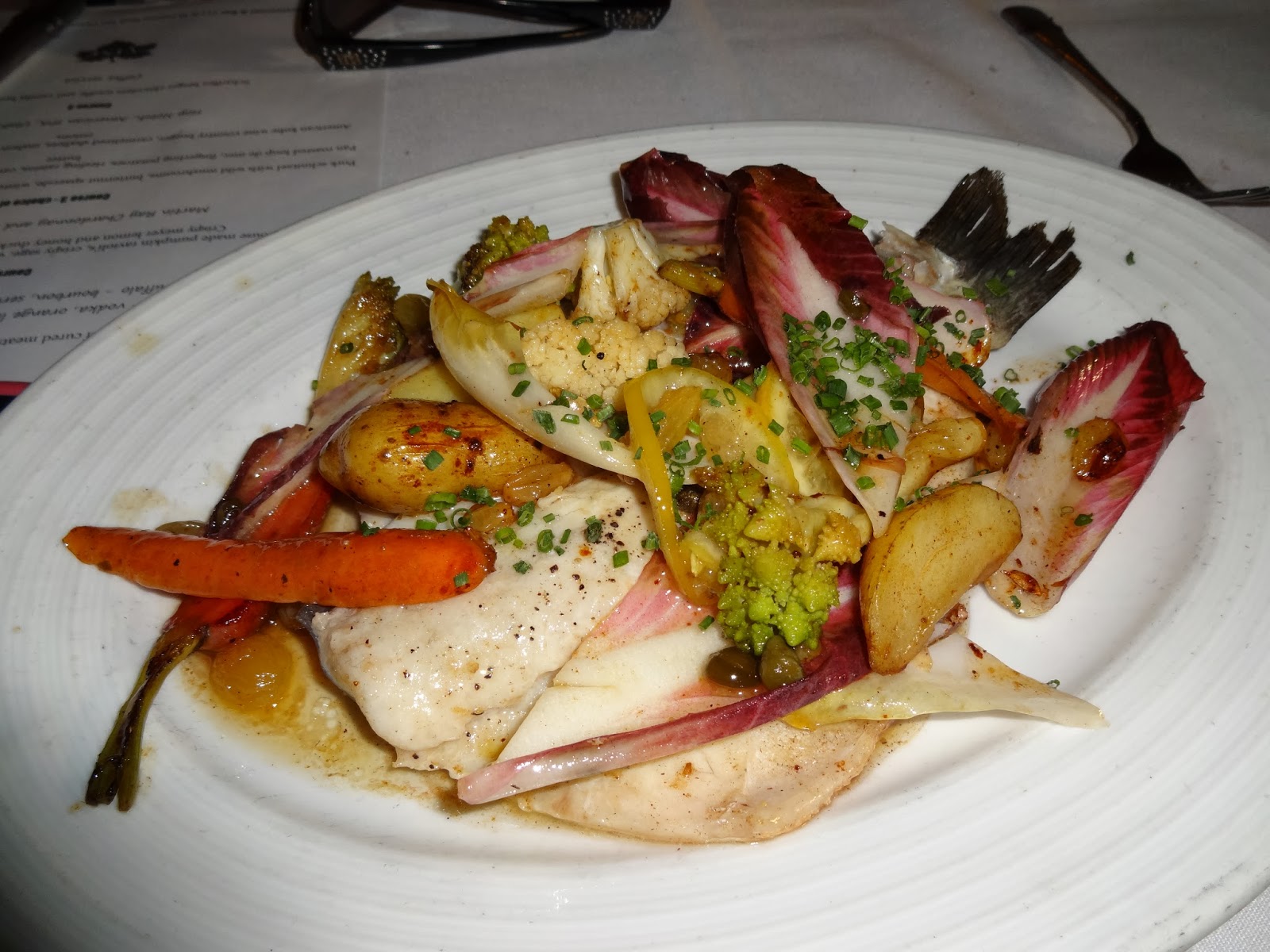 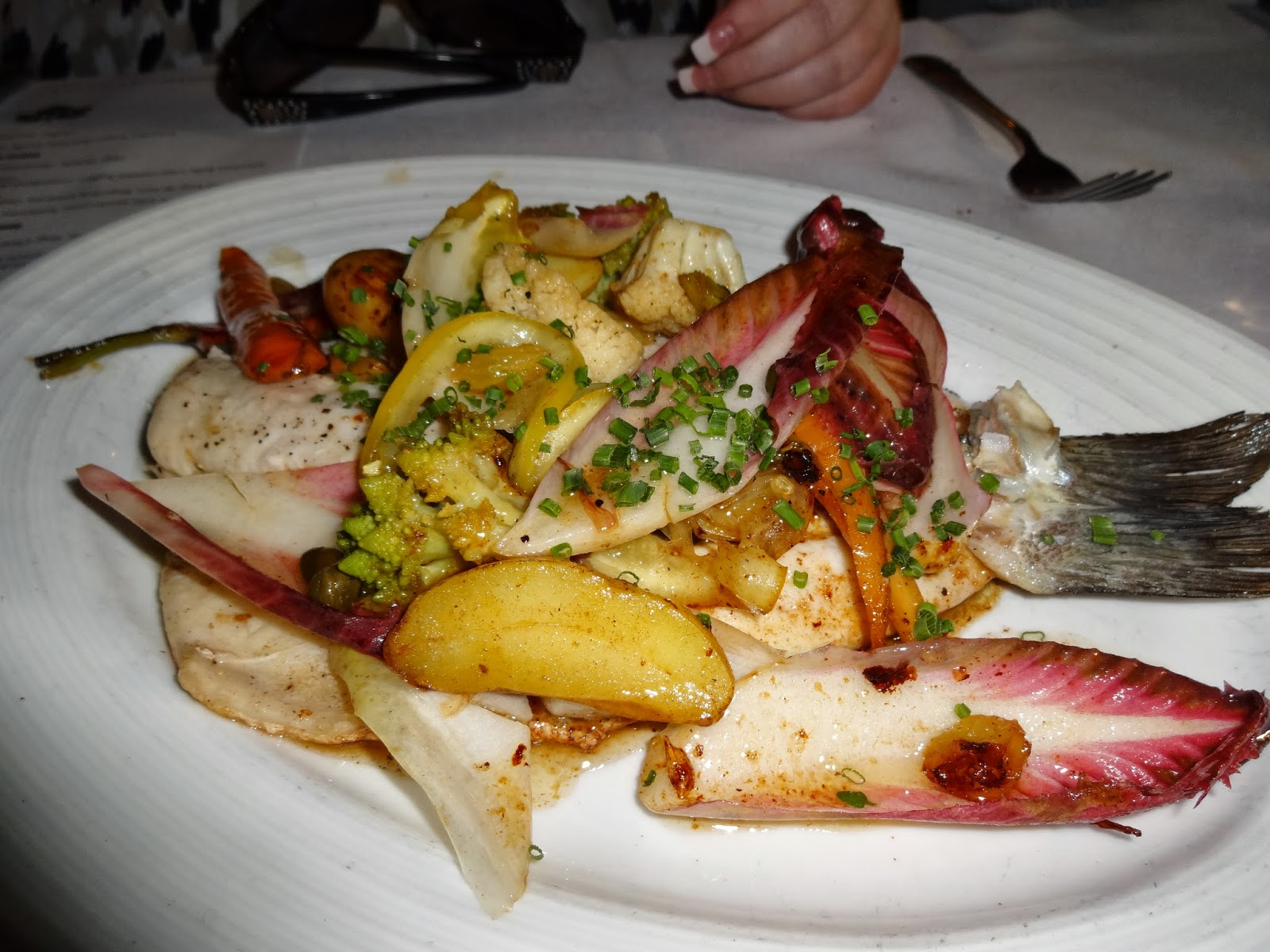 We had the choice of three entrees at our media lunch, so I made sure that Katie and I got two different things. She ordered the Pan Roasted Loup de Mer ($27). For this French seafood dish, Chef Jared used Mediterranean sea bass, and topped it with fingerling potatoes, Riesling raisins, cauliflower, baby endive, and a pistachio brown butter. Katie felt this had very subtle flavors, while being very juicy. She liked this rustic dish, that allowed the natural flavors of the fish to shine through. Just looking at this dish from across the table, you could not help but be drawn to bright colors on the plate, and the wonderful aroma of the sea bass. 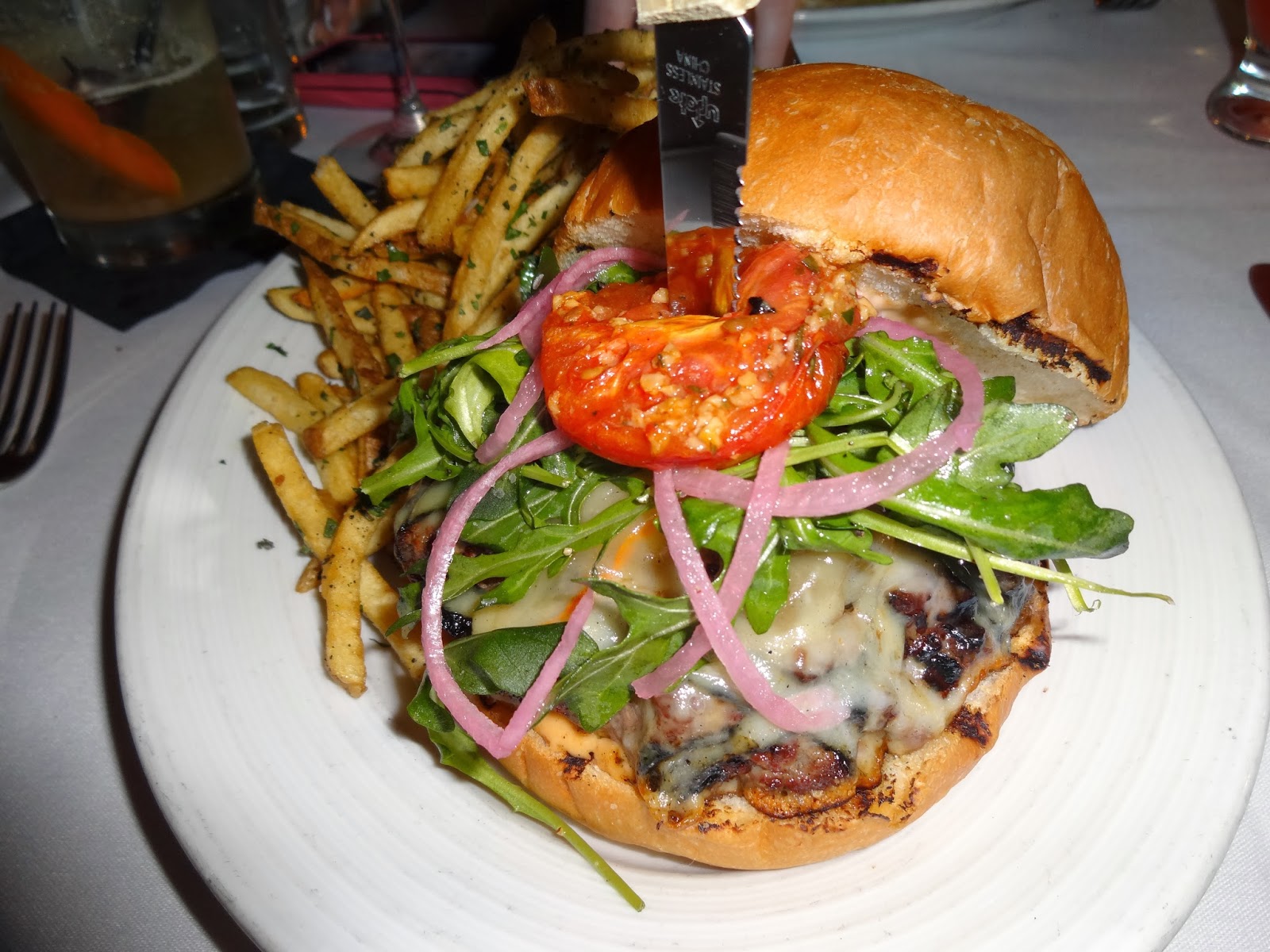 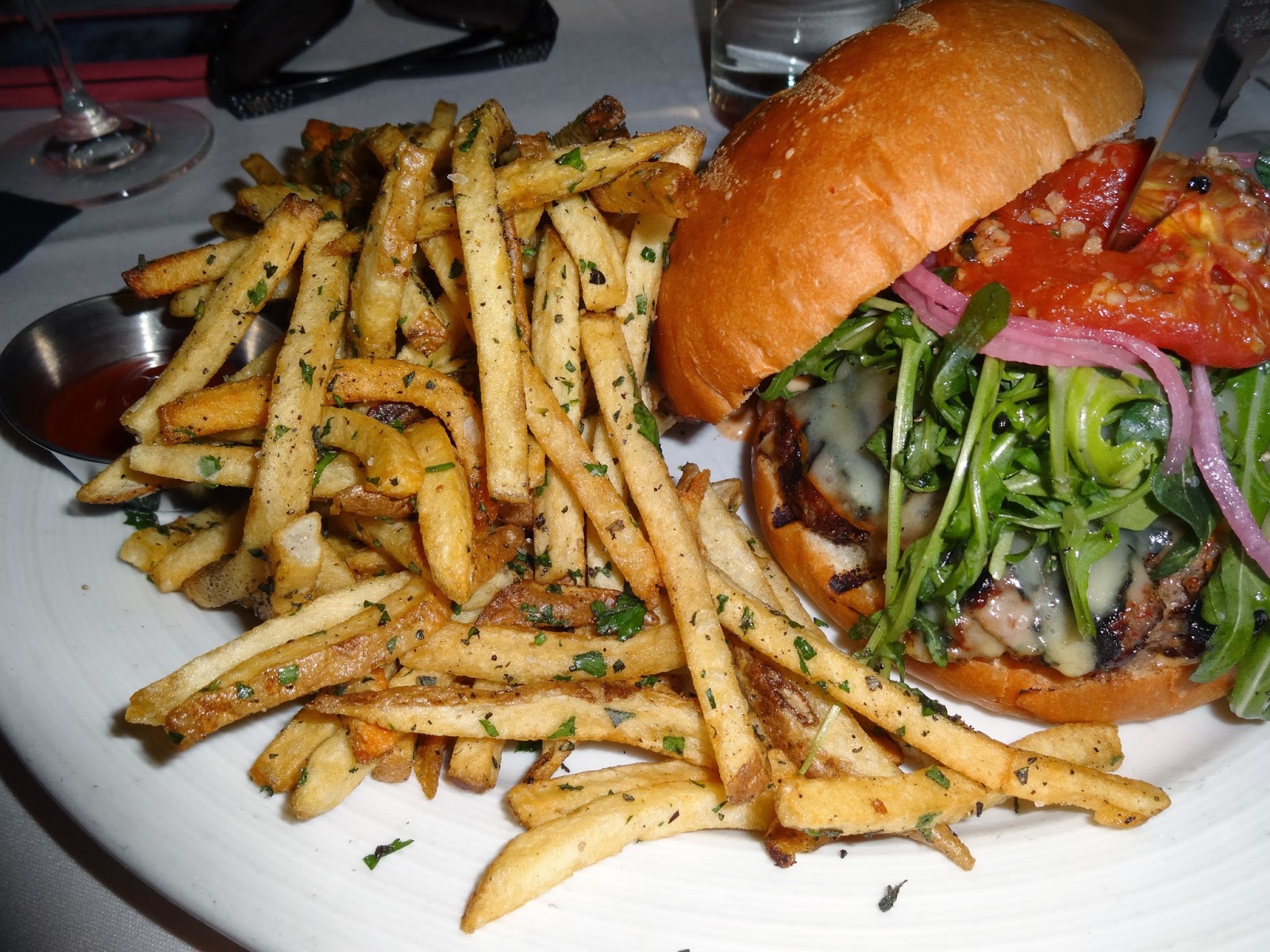 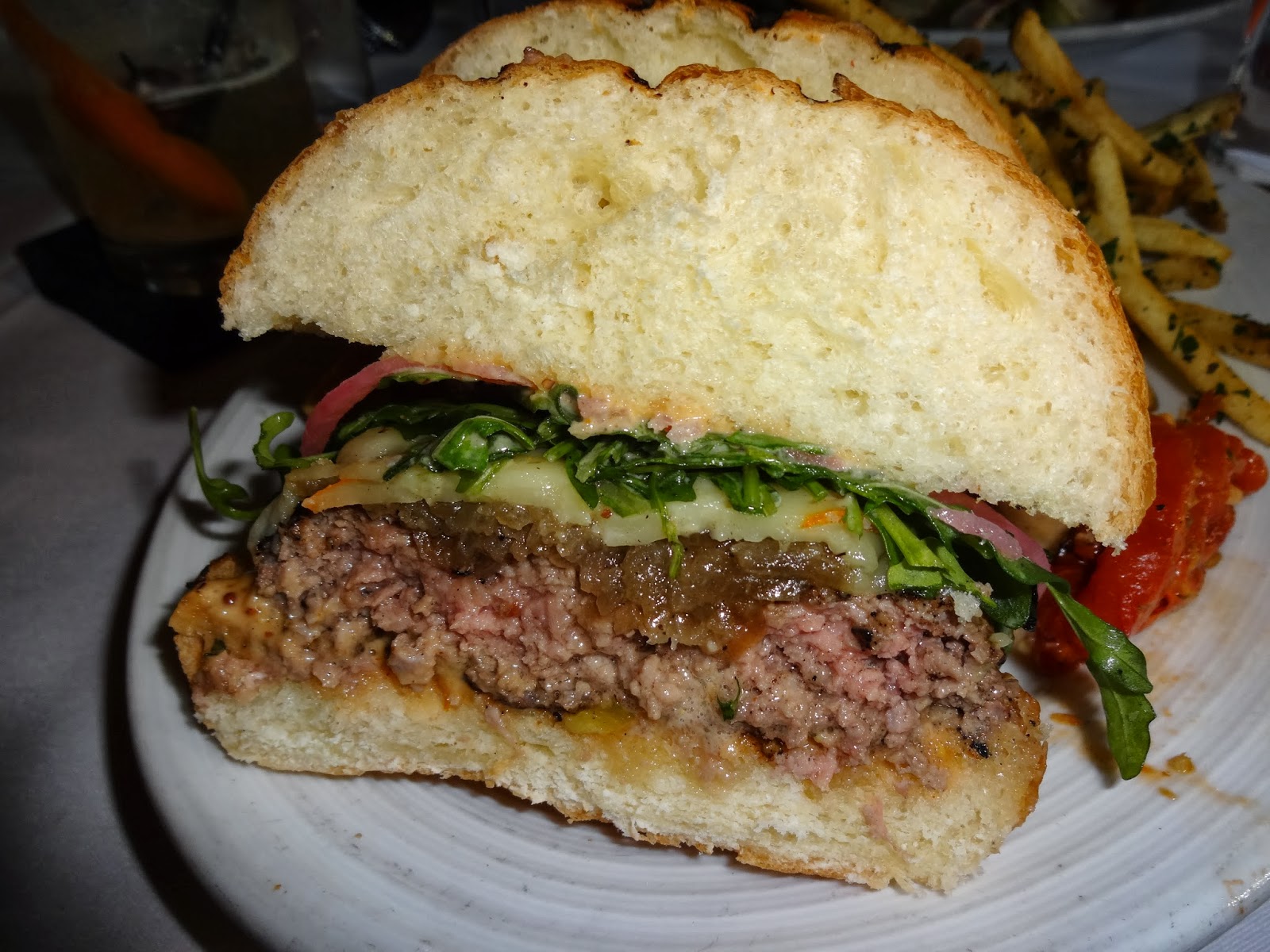 I was not expecting to have a burger at Vine, but it was one of the three entrees they were offering us, and I was told how amazing it was. The American Kobe Wine Country Burger ($13) did not disappoint. This good sized burger was topped with caramelized shallots, mahon cheese, marinated tomato, and pickled onions, on a brioche bun. I would describe this burger as a very good backyard burger. The mahon cheese is very mellow, the rest of the toppings were executed very well. When I saw the bun, I was afraid it was going to be too bready, but this was not the case. The bread absorbed the juiciness of the meat and flavors of the other toppings. The fries here are made with real potatoes, and you can definitely taste the difference. They were seasoned with Parmesan and fresh herbs from their garden out back. Very tasty, and almost out shined the burger. 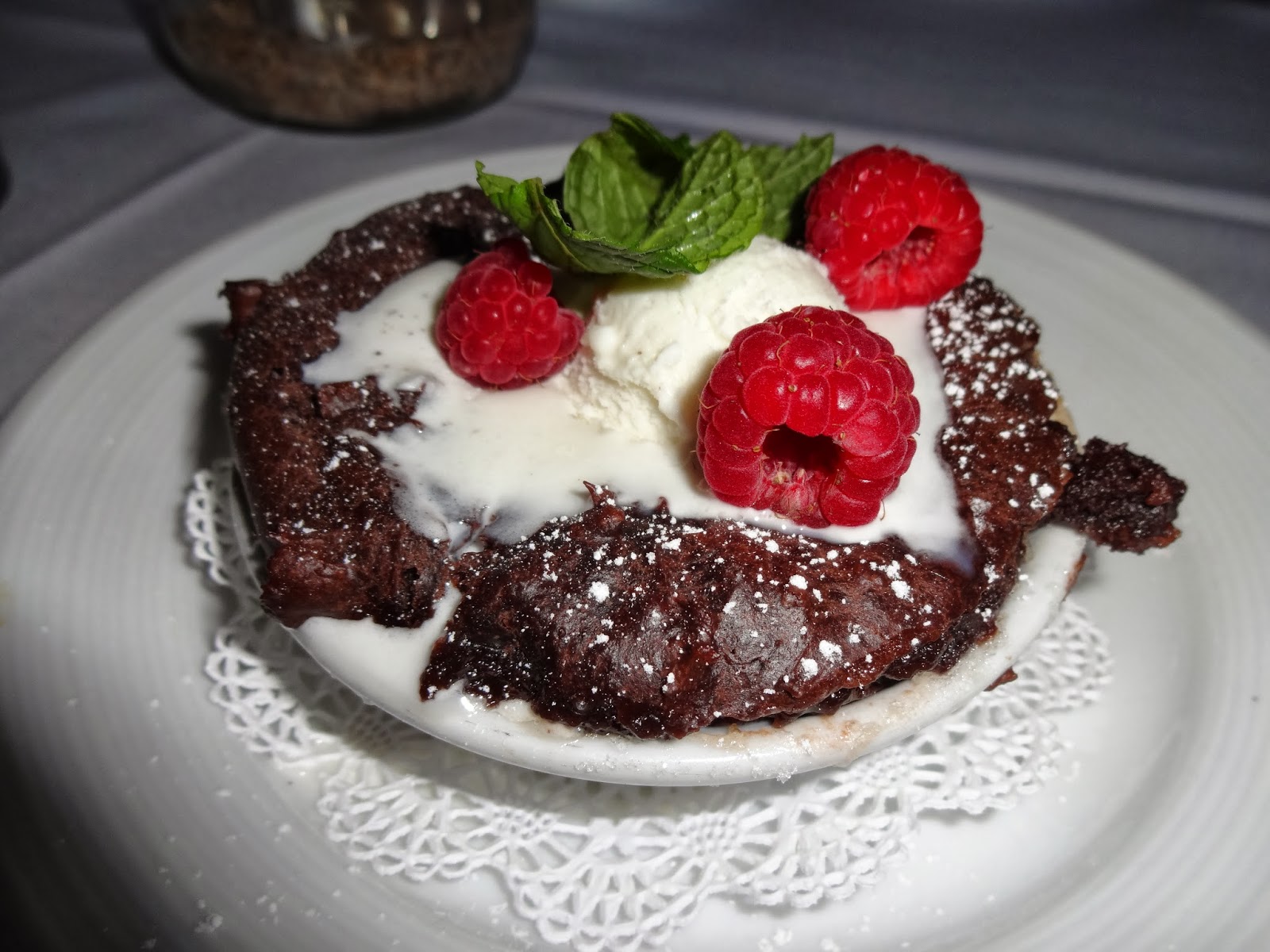 When it was time for dessert, we were ushered out front to their patio that overlooks all the activity on El Camino Real. Here we were given Coffee and Scharffen Berger Chocolate Souffle ($10). This was not only a chocolate souffle, but it also included vanilla bean ice cream. This souffle was not overly sweet, but still tasted great. I was pretty full from everything that we ate up until this point, but I ended up making quick work of this.

Vine was everything we thought it would be, especially after we had found out that Russ had took it over. Not only was the stuff we tasted very good, but the rest of the menu looks promising as well. I am torn between a Pulled Lamb Sandwich and their Jidori Chicken on my next visit. Of course there will probably be an amazing chef's special that Chef Jared has cooked up, that will throw all of my plans out the window, but I'm sure it will be delicious. Everyone at Vine Restaurant was a real pleasure to deal with. Even though this restaurant has changed ownership, a lot of the employees have stayed on, so if you have been to Vine before, you will probably recognize some familiar faces. Glad to see that Russ has turned up at Vine, and with this great team behind him, I am sure Vine has a bright future in store for it.

For more information on Vine Restaurant, go to their website here: http://www.vinesanclemente.com/index.html
Posted by OCEater at 9:08 AM