Another Barbecue Joint in Orange 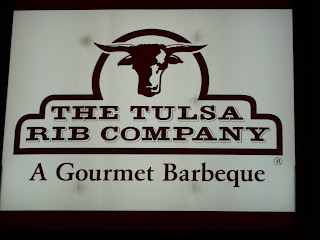 Some might call the city of Orange the barbecue capital of Orange County. The city has what I consider to be a plethora of barbecue restaurants. They have the Rib Trader, Famous Dave's, Smoqued, Smokey Fred's BBQ, Rancho To Go BBQ, Lucille's, and Johnny Reb's, along with the place we are reviewing, Tulsa Rib Company. Nine barbecue restaurants may not seem like a lot to you, but when you consider that I live in Mission Viejo, a city that is just a little smaller than Orange in area and only differs by 40,000 people, and Mission Viejo does not have one barbecue restaurant in its city limits. Okay, we do have a Hawaiian BBQ restaurant and a Mongolian BBQ restaurant, but we are talking traditional barbecue here. My point is maybe a few of these barbecue restaurants can spread the love, and open up near where I live. They would have no competition, and I would be forever grateful.

Okay, enough of my pleading, and back to our review. I had been to Tulsa Rib Company when they used to be located off of Tustin Avenue. It was a long time ago, way before I started this blog. Tulsa Rib Company has been around a long time as well, since 1981. They moved to this new building that used to be home to another Orange barbecue restaurant, Scottie's Smokehouse BBQ. Tulsa opened for business in this new location in March, and from the looks of things, people have definitely followed them here.

We got to Tulsa Rib at about 6PM on a Friday night. We had no problem getting seated right away, but the restaurant filled up quickly after we were here for awhile. The new Tulsa Rib is a lot lager than it was before. The barbecue smell definitely hits you when you walk in. Light woods dominate the color scheme, and the restaurant kind of has a coffee shop kind of vibe to it. They had nice plasma TVs hanging on the walls, which were showing hockey on the night we were here. The menu at Tulsa is a little larger than most barbecue restaurants. All the staples are here, ribs, chicken, and sausage, but no tri-tip dinners. We were pretty hungry, and the quicker the food got here, the faster Sabrina could eat, and that would mean less talking from her. So let's see what we thought of Tulsa Rib Company. 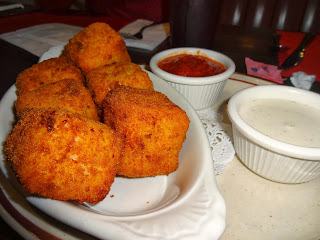 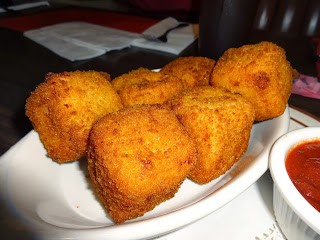 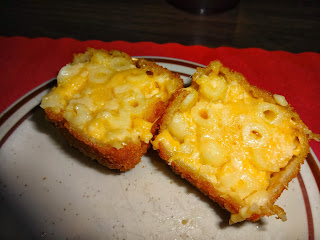 We were pretty hungry, so while we were waiting for Sabrina and Anthony to get to the restaurant, Katie and I took the liberty of ordering the Fried Mac and Cheese ($7). A lot of places are doing this appetizer now, as we see it all over. This version at Tulsa was pretty good. The breading had a nice crunch to it, and the inside was very creamy, with just the right amount of cheese. I might be spoiled by the version at Slater's 50/50, as I wished this had a bigger burst of flavor, like maybe with some bacon added. Still a solid version of fried mac and cheese. 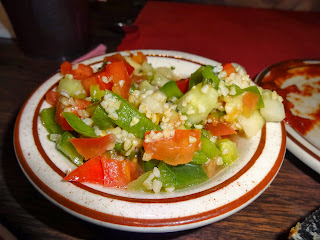 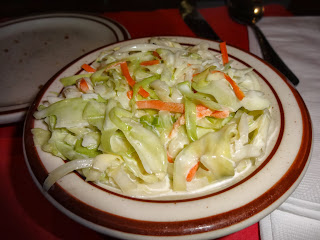 With entrees at Tulsa you get the choice of dinner salads, Cole slaw, or tabooli. I was surprised that out of the three of us that got entrees, none of us got a dinner salad. Sabrina went with the Tabooli. This is Tulsa's take on this Middle Eastern salad. Besides the changed spelling of this salad on their menu, this version featured tomatoes, bell pepper, cucumbers, bulghur wheat, parsley, mint, and an olive oil dressing. Sabrina seemed to have liked this unique salad. She thought the flavors intertwined with each other well, and the freshness of the produce were evident. Both Anthony and I went with the Cole Slaw. I really enjoyed this mayo based slaw here at Tulsa. There was plenty of dressing, while the cabbage still retained a crunch. Not a Cole slaw that is going to blow you away, but a decent version of this classic side item. 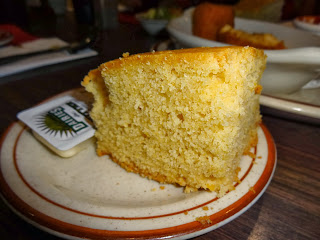 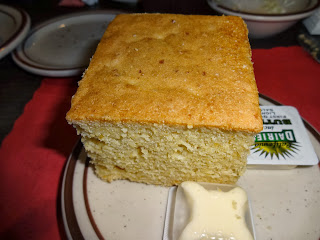 With our entrees we also got Cornbread, and they also brought Katie some, even though she only got a sandwich. Guess they did not want her to feel left out. I have a funny relationship with cornbread. Most of the time I feel that it is too dry, and rather bland tasting. This was not the case here. This cornbread was moist, but still firm enough that it did not crumble like some versions do. It had a nice sweetness to it, and would have only been better with some whipped honey butter. This is one cornbread that I could get along with. 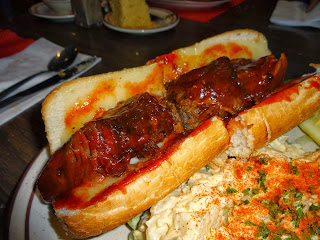 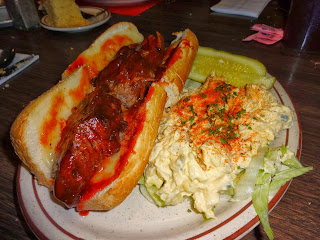 Since I already let the cat out of the bag about Katie's dinner, we'll start with her sandwich first. She had the Grilled Tri-Tip Sandwich ($9.95). The french roll was filled with tri-tip, and topped with jack cheese, and their spicy BBQ sauce. Katie really liked this sandwich, calling it one of the best barbecue sandwiches she has had in recent memory. The meat was tender, there was plenty of it, and she liked the inclusion of the jack cheese. Katie was the only one of us to get the potato salad as her side item, and she could not have been happier. This salad had a real creamy texture, but still had the presence of tender potato chunks. It was seasoned well, and she liked the excess paprika sprinkled on top. 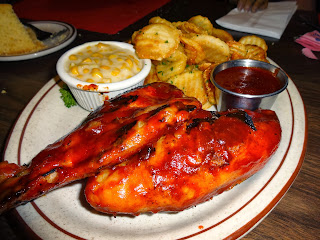 Sabrina was quiet for just the right amount of time when she was digging into her Barbecue Chicken ($12.95). We all enjoyed the peace and quiet as she ate this tender chicken. The barbecue sauce did not overpower the poultry, but rather enhanced it, as a good sauce should do. This was served with a pretty good creamed corn and your choice of potatoes. Sabrina went with the Tulsa potatoes, which reminded me of these breakfast potatoes we used to have as kids at this restaurant in Anaheim Hills, called Betsy Ross, and later called MacArthur's. These potatoes brought back instant memories of me being a kid again, which was long ago. 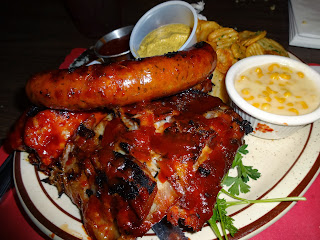 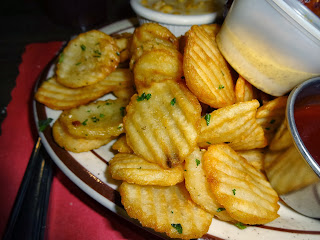 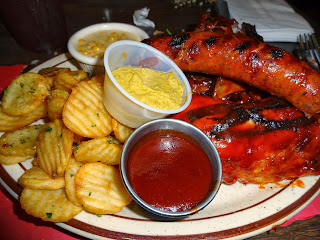 Both Anthony and I got the same thing, which helps cut down on my writing. Thanks Anthony. We both opted for the Tulsa Triple Combo ($17.95). The menu claims that this is for hearty appetites, and they are right. We both left here very full after conquering this plate, which included; a half pound of chicken, baby back ribs, and a choice of sausage. Both Anthony and I thought the highlight of this plate was the sausage. He had the Chicken and Apple, while I had the Hot Link. The snap of the casing was good, while the inside had a nice meatiness to it, with a good flavor for both. The chicken was tender, and was probably our second favorite part of the meal. The baby back ribs were not bad, but some of the ribs were on the fatty side, and these were pretty small. Good flavor though, and the extra sauce came in handy. 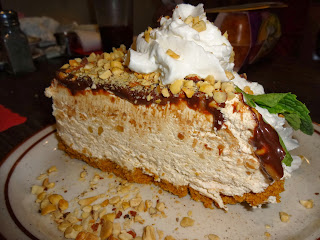 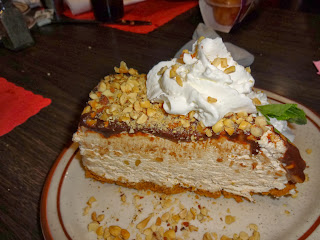 We did not really want dessert, but there were a number of items on their dessert menu that we could not resist, including this Peanut Butter Pie ($5.75). This pie starts with a graham cracker crust, the filling is peanut butter cream, and is then topped by a chocolate ganache, chopped peanuts, and whipped cream. This pie was surprisingly light. The peanut butter taste was kind of subdued, and I would have liked the chocolate to be a little more prominent with this dessert. You can never go wrong with the combination of peanut butter and chocolate. Not bad, and splitting this between the four of us was a great way to end the meal.

So, what are our final thoughts on Tulsa Rib Company? I liked our visit, but I was not blown away by it. It's true that the barbecue here is very solid, but it was kind of pedestrian. I guess what I'm trying to say is that Tulsa Rib is kind of an old school barbecue restaurant that does not take too many chances with their meats. If you have a craving for barbecue, Tulsa will definitely fill that craving with decent barbecue at an affordable price. The service during our visit was on point. We were very well taken care of, and the food came out in a timely matter. We hope that someday one of the many barbecue restaurants in Orange realize that there is great potential down in south county, hopefully Mission Viejo.

Out of five oil rigs, (because one of Tulsa, Oklahoma's nicknames is, "oil capital of the world"), five being best to zero being worst, Tulsa Rib Company gets 3 oil rigs.

To get more information about Tulsa Rib Company, go to their website, here: http://www.tulsarib.com/index.html