A Glimpse Into Old Las Vegas 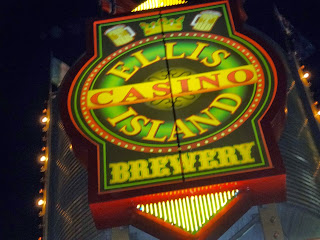 The Strip in Las Vegas used to be all about buffets and cheap food specials. When I first started going to Vegas in the early '90s, I can remember having 99 cent shrimp cocktails, $4.99 steak and eggs, and buffets that were under the $10 mark. Now that all the big hotels have sprung up, well-known chefs are opening restaurants, and the general "Disneyfication" of the strip has taken over, the days of cheap Vegas eats are as extinct as finding a five-dollar blackjack table on a weekend night. There is a glimmer of the old Vegas that we found one block away from the strip, a place called Ellis Island.

I would like to take credit for being in the know about this place, but I have to give credit to my good friend Rebecca "Gilby" Anderson for telling me about it. She told me two years ago that I needed to do a review of the barbecue restaurant inside Ellis Island. After ignoring her pleas for far too long, I put this on my list for this visit to Sin City.

Ellis Island is located one block east of Las Vegas Boulevard, right behind the Flamingo Hilton. This is old school Vegas for sure. Ellis Island has been around for over 40 years, and it has that kind of feel to it. The casino is dark and dingy, the slot machines seem pretty old, and this place seems to draw the locals in, for being as close to the strip as it is. As per Gilby's instructions, we got a players club card as soon as we got here. This entitled us to a discount on our food, as well as some free slot play. This was already well worth the trip. After losing our twenty dollars in the slots, we made our way towards the BBQ restaurant here. The barbecue is only served in the BBQ restaurant, which is located right next to the small sportsbook. I have heard that the restaurant here serves some good food, at cheap prices as well. That will have to wait until our next visit though because we were on a mission to have some barbecue.

The BBQ restaurant is only slightly brighter than the casino. We got here at about 8PM on a Tuesday night, and still had about a ten-minute wait. I have heard that wait times can be much longer on weekend nights, so get your name on the list, and you'll have plenty of time to play the tables or the slots. The restaurant has a nice view of the guys working in the kitchen. I liked being able to watch the guys work to get the food out. Nice comfy booths line the walls of the restaurant, with tables dotting the center of the 40 seat eatery. The menu here is very limited. They offer two entree items, served in four different combinations. With such a small menu, it took us no time to decide what to order. 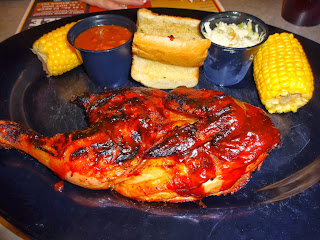 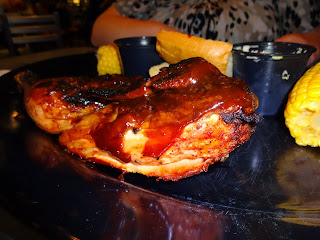 I knew Katie would probably get the Half Chicken Dinner ($8.99), and I was right. The dinners here are served with coleslaw, BBQ beans, corn on the cob, and garlic bread. A lot of food for under ten dollars. We both thought the chicken was tender and flavored nicely by the barbecue sauce. I liked that it was lightly coated with the sauce, and not drenched. They did provide squirt bottles of extra sauce if you needed them though. Katie enjoyed all of the sides and felt this was the perfect size plate for her. 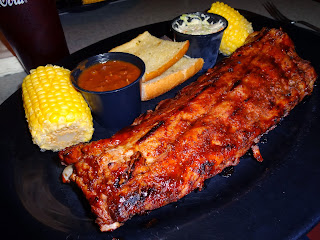 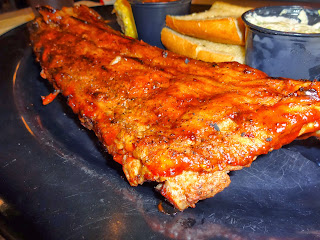 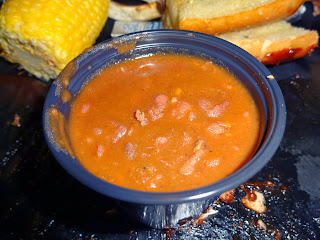 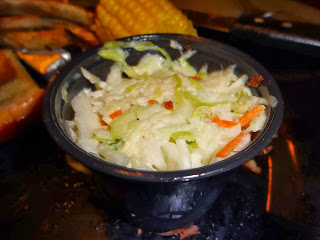 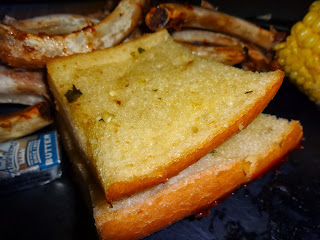 When a half a rack of ribs costs ten dollars, and a full rack is only 4 dollars more, it is not shocking that I would get the Full Rack of Ribs ($13.99) here. These baby back ribs were very good. They were tender, fell off the bone easily, and had a nice easy flavor to them. Just like the chicken, these came out lightly sauced, but there was plenty of sauce on the table if you would like more sauce. Whenever ribs come out with too much sauce, I always think they are trying to hide something with the meat, this was not the case here, some of the best ribs I have had in a while. The sides were pretty solid as well. The coleslaw had plenty of a mayo-based dressing, which is my preferred version of coleslaw. The BBQ beans had plenty of flavors and little bits of meat in them. I am not really a big fan of corn on the cob, so I just nibbled at that. The garlic bread was probably the weakest part of this plate. It lacked any real garlic flavor, and the bread could have been softer.

Ellis Island was a real hit with both Katie and I. The food was well worth the trip, and as an added bonus, it was a great value. These meals easily could have been ten dollars more, and would still be worth it. I hope they don't read this and raise the prices though. A few things that you should take note of before coming here. For some reason, the restaurant is a 21 and older place, and the barbecue restaurant is only open from 4PM till 10PM. I have read some online reviews for this place, and there have been some issues with service, but we did not experience any problems on this night. Our food came out in a timely manner, we got refills, and our waiter was on top of his game. Glad we finally took Gilby's advice about coming to Ellis Island. Now it will be part of our regular Vegas rotation when we are in town. A nice little spot, that showcases what Vegas used to be like a few decades ago.

Out of five coin buckets, (because this place reminds me so much of old school Vegas, that I half expected them to have their slots pay you out in coins, and if that was the case, you would need coin buckets to haul your winnings up to the change booth), five being best, to zero being worst, Ellis Island Restaurant and Casino gets 3.5 coin buckets.

For more information about Ellis Island Restaurant and Casino, go to their website here: https://www.ellisislandcasino.com/dining.html