Checking Out Chixy In Costa Mesa 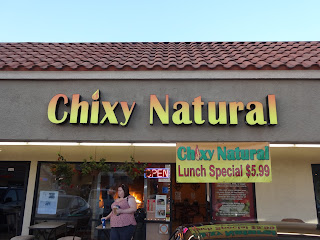 I get a lot of my tips from reading other blogs, magazines, and newspaper food reviews. Our visit to Chixy Natural is thanks to the great people over at OC Weekly. I have religiously read almost everything that they have posted on their Stick A Fork In It blog, as well as what they put in their print edition of the OC Weekly for a good many years. One of my favorite columns is the Hole In The Wall, written by Gustavo Arellano. Just from reading Gustavo's words all of these years, I can tell that he has very particular tastes, especially when it comes to hot sauce. He was the one that gave me the heads up on the habanero salsa that you have to ask for at Taco Adobe in Orange. In his review of Chixy Natural, he mentions another fine salsa, and it was enough for us to make the trip to Costa Mesa.

Chixy Natural is located on the corner of Irvine and 17th Street, right across from La Cave. I lived in this area for over ten years, and never once found myself in this tiny strip mall. Of course, Chixy was not around then, they opened just over two years ago. In that time Chixy Natural has had numerous write ups in the OC Register, along with some mentions in OC Weekly. We were on our way to the OC Fair for the second time, and did not want to have fair food again. So we swung by Chixy on a Saturday night at about 6PM. 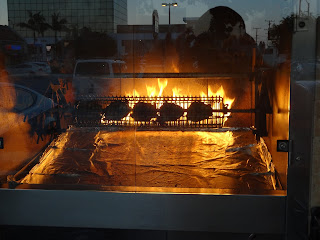 You know that you have found this place, when you see the chickens that appear to be on fire in the window. Stepping inside, this not a huge restaurant. Maybe seven tables, and ordering is done at the counter. The menu is not large either. There is no doubt about it, they are definitely chicken focused here. They offer chicken combo plates, salads, bowls, and wraps. There was definitely a steady stream of customers on the night we were here, most of which had their orders prepared to go. We would be eating here, and after about five minutes our food was brought to our table. 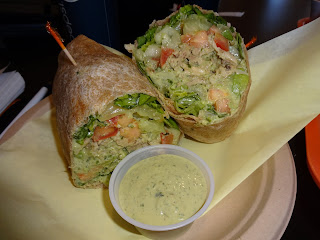 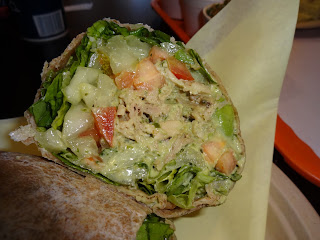 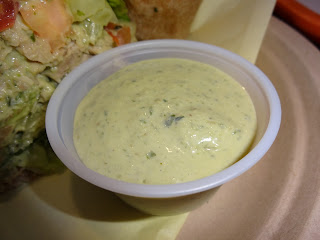 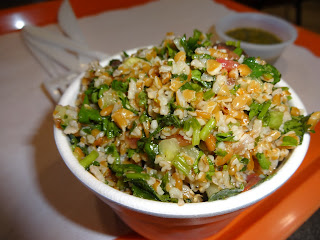 Let's show Katie's meal first. She went with the Chicken Wrap ($7.50). This wrap was filled with chicken of course, but also had lettuce, tomato, cucumber, pickle, mint, basil, and their house dressing inside of it. As if that was not enough, Katie also added avocado in there for an extra dollar charge. This had some good, and some bad things going for it. The wrap was filled with tons of tender chicken. They definitely do not short change you when it comes to chicken with this. She was not too fond of the house dressing used here. She felt it overpowered the meal, and she used a lemon garlic sauce to help cut the sweetness of the dressing. She would probably get a bowl on her next visit here, but hold off on the house dressing. She also got a side dish of Couscous Salad ($2.50). Gustavo had raved about the salad, but we both thought it was just okay. To be fair though, I am not much of a couscous kind of guy. This one was better than most, because it had raisins in it, which gave it a little sweetness. Let's see if my meal turned out better than Katie's. 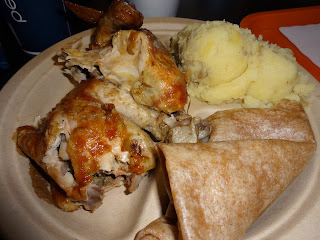 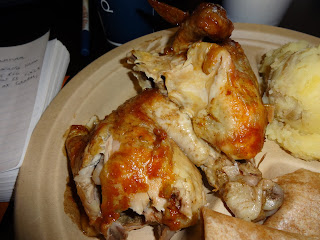 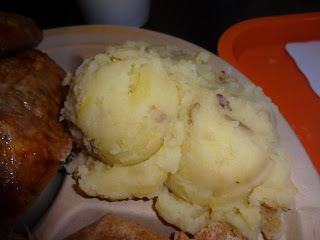 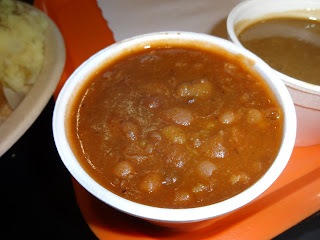 I went the more traditional route at Chixy Natural, with the Number Two Combo ($9.90). This combo included half of a chicken, two regular sides, and a tortilla. Let's start with the chicken. The chicken was very tender, juicy, and fell off the bone rather easily.  I did make quick work of this half of a bird. For my sides I went with Mashed Potatoes and Baked Beans. The potatoes were a little on the dry side, but made much better with the provided gravy. The beans were a much better choice. They were cooked well, had a good spice to them, and the consistency was spot on. The tortilla served with this was a little too wheaty for me. I would have rather of had a flour tortilla. 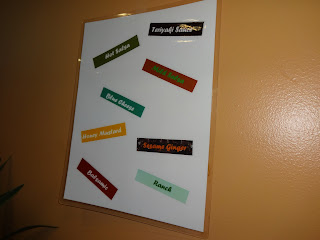 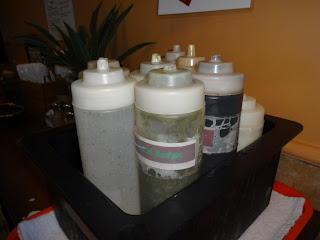 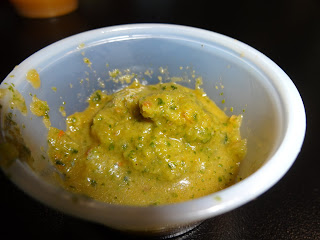 Of course I have not forgotten to mention the Spicy Hot Sauce that ultimately brought us here. This green sauce was very good, and went well with the chicken. Just like Gustavo, I used more than my fair share of this. I expected more spiciness, but it definitely did add flavor. They also offer seven other sauces, so if you are not feeling like a hot sauce, you have other options here.

I liked our visit to Chixy Natural, but was not blown away. The meals were pretty good, but what made this place for me were the sauces. They brought this restaurant just above the average mark for me. I felt that the prices here were a tad too high for the amount of food that you get. The chicken was just a step above what you could pick up at the local supermarket deli case. The ladies behind the counter were pretty nice, and patient with newcomers coming in and taking quite a long time to peruse the menu board above the register. If I were in the area, and one of my friends wanted to meet here, I would still totally go, just so I could have that green hot sauce again.

For more information about Chixy Natural, go to their website here, http://www.chixynatural.com/index.html