Mulling Over Our Meal at Mulleady's 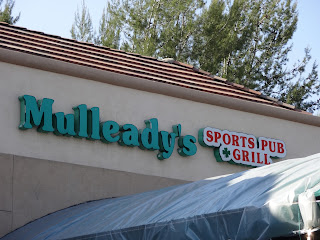 Good sports bars in South OC are like trying to find good baseball being played at Angel Stadium. You really need to look hard, or just look at the team that the Angels are playing on that particular day. The Angels are such a bad team right now, they could even make a men's 50 and over softball team look good. If you could not tell, I am a little frustrated by our local baseball team. They of course have just under 130 more games this season, so they do have time to turn it around, but I am not going to hold my breath. Just like I am not going to give up on finding a good sports bar in South OC. That is what brought us to Mulleady's in Mission Viejo.

My good friend Kevin has been singing the praises of Mulleady's since he heard about my food blog. Kevin works at the golf course at Coto, so this place is kind of an after work hangout for him. We decided to meet up with him after his long hard day at work, talk some hockey and about some of the crazy times we have had in the past, and of course my primary objective, sample the food here.

We got to Mulleady's about 7 on a recent Thursday night. This is not a huge restaurant. The higher than average ceilings give it an openness, even though  the restaurant is long and narrow. The tables are a bit close together, but nothing that would make a person uncomfortable. The close proximity to your fellow patrons really encourages the neighborhood type feel to this place. We could really sense that many of the people here were regulars. The predictable sports paraphernalia and the brick walls really dominate the dining space. There is also an enclosed patio in the front of the restaurant for people that want a little more airflow. There are plenty of TVs around the room, and they were more than happy to turn the hockey game on for us.

Mulleady's has been around for awhile now. They opened their doors in 2001. Owners Gary and Kris Mulleady can be seen on most nights running food and chatting up customers. On the night we were here, there was no sign of Gary, but Kris was very hospitable and friendly. After waiting for Kevin to arrive we checked out the menus, and were ready to eat. This is what we decided on. 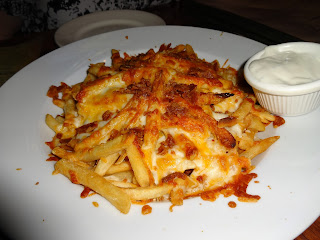 I am always a sucker for cheese fries, so it was a natural that we ordered the Pub Fries ($5.95) to start. These fries were topped with cheese and bacon, then finished off in the broiler. I really liked the nice touch of browning the top of these fries. The fries were of the thinner variety, and did not hold enough of the ranch dressing for my taste. I would have liked a thicker fry here. The cheese was mellow, and these were not as greasy as other cheese fries we have had. A good size portion as well. 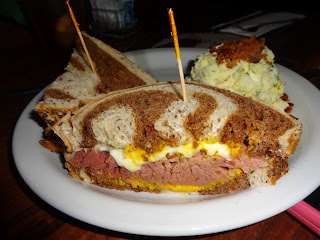 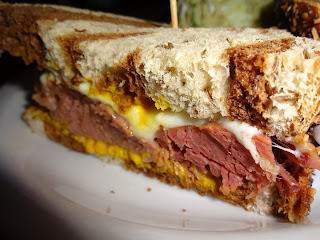 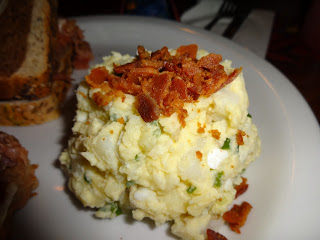 Mulleady's is a very subtle Irish bar. They have a four leaf clover as their logo, but they are not all in your face about the fact that they are an Irish bar. I kind of like that. Anyways, lets start with Katie's selection for dinner, the Corned Beef Sandwich ($7.95). This sandwich came on marbled rye, with mozzarella cheese and yellow mustard. I thought the mozzarella cheese was an interesting choice for this sandwich. Katie liked this, but felt that it needed a little kick to it, like maybe some spicy deli mustard or some pickles. The bread was very soft, but the corned beef needed to be sliced a little thinner. Otherwise the meat had a very subtle flavor. Katie did enjoy the homemade potato salad that came with this sandwich. It had a very good consistency, and was topped with real bacon bits. Never a bad thing. Katie would probably opt for a different sandwich on future visits here. 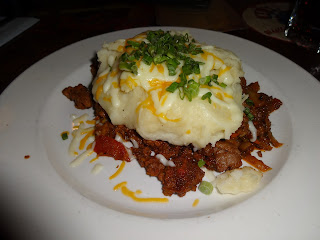 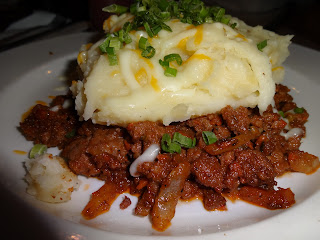 The menu at Mulleady's has just about something for everyone. They have regular bar food, steaks, Mexican food, pizzas, burgers and pastas. I ordered this Shepherd's Pie ($9.95) from the Irish section of the menu. When I ordered this, the waiter let me know that this is a sweeter version of a shepherds pie. He was not mistaken. This version was made up of seasoned ground beef, chopped tomato, carrots, and is then topped with mashed potatoes and cheese. The taste of the beef kind of reminded me of a Sloppy Joe, with mashed potato over it. The ground beef was left in bigger hunks which I liked, but the sweetness took some getting used to. I admire them for trying to make this dish their own, but I would have preferred the more hearty version of this Irish classic.

From the food standpoint of what we had on this night, I would say that Mulleady's was just a little bit above average. Like I said earlier, their menu was kind of all over the place, so I am sure that I will be able to find other items that I might like here on future visits. Don't get me wrong, nothing we had here was awful, but it was nothing that made us stand up and take notice. I think the atmosphere kind of overshadowed the food. The neighborhood type vibe that surrounds this place really has made me excited to try it for NFL football in the fall. Sometimes neighborhood type bars can be kind of snobby towards newcomers, but I did not get that feeling here at Mulleady's. We might not see good baseball being played at Angel Stadium anytime soon, but there might be hope that their is a good sports bar in South OC.

Out of five rosin bags, (since I learned that Gary Mulleady was a minor league pitcher back in 1969, and pitchers always use rosin bags), five being best to zero being worst, Mulleady's Sports Pub and Grill gets 3 rosin bags.