Tooting Their Horn at Tutto Fresco 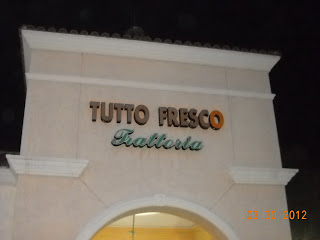 Tutto Fresco
30642 Santa Margarita Parkway
Rancho Santa Margarita, CA 92688
I don't like to pigeon hole my friends, but I do it almost every time we go out. I have my friends that are my steak experts. I have friends that know about great burgers. I even have friends and family that know about great sushi places to try. This is the second time we have been out with Chuck and Stephanie, and they are quickly becoming my, "Italian food couple".

On our first journey out with them we went to Antonucci's in Mission Viejo. For this dining adventure we made the trek out to Tutto Fresco in RSM. I had not realized how popular this place is. They get very positive reviews on Yelp, and they have an 85 percent approval rating on Urbanspoon. There is also another location of Tutto Fresco in Orange. That location is more of a casual Italian restaurant. They even have a drive thru. Now that is casual.

No drive thru at this location. When we arrived here at 7 on a Friday night, the restaurant was packed. We did not have to wait for a table though. The dining room is comfortable even though the tables are pretty close to each other. High backed chairs give you a kind of intimacy that you might not get without them. After perusing the rather large menu this is what we came up with. 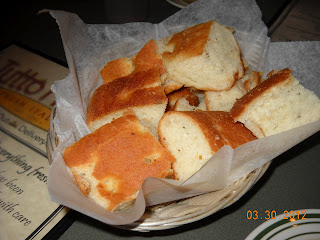 First off, the obligatory bread basket shot. The bread here was soft and good. It was definitely seasoned with some herbs. The bread was made even better by dipping it in the olive oil and vinegar. 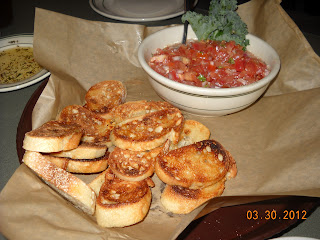 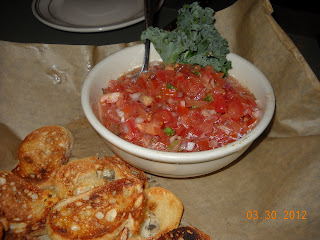 The last time we were out with Stephanie and Chuck we had a very good bruschetta. At Tutto Fresco we hoped lightning would strike twice with the Bruschetta al Pomodoro. This, "do it yourself", bruschetta was served in a bowl and then we put it on the toasted bread. This bruschetta was very citrusy and was mostly in a liquid state. Not a bad bruschetta, but not the best we have had. 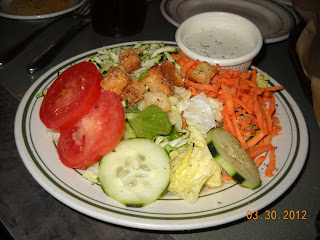 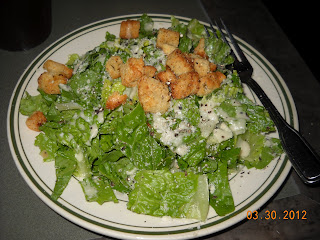 Both Katie and I had salads to start us off. She went with the Garden Salad. This salad included cucumber, carrots, tomatoes, croutons, and shredded zucchini, along with her choice of dressing, Ranch. She liked the fresh ingredients here, and the salad was a nice start to the meal. I had the Caesar Salad, which was your basic Caesar with romaine lettuce, croutons, Parmesan cheese, and Caesar dressing. I liked that they added extra dressing here. Basic, but still a solid salad. 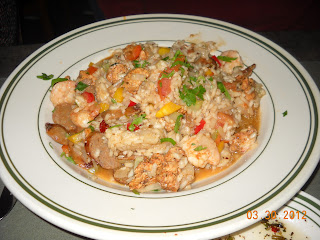 I was always told to defer to my elders, so we will start with Old Man Chuck's meal. In his infinite wisdom he selected the Jambalaya Risotto. This plate combined rice with chicken, sausage, shrimp, red and yellow peppers, onions, tomatoes, and celery in a lightly spiced Cajun sauce. You don't see this on a lot of menus at Italian restaurants. The meats were pretty good in this, but there was zero spiciness going on here. You can not call it a jambalaya if there is no spice. Chuck summed up his meal as, "good, but not great". 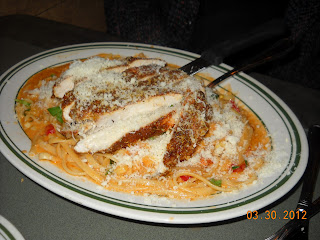 What we all agreed was great was Stephanie's dinner, the Chipotle Chicken Linguine. This flavorful dish was made up of blackened chicken, red and yellow peppers, roasted corn and onions, in a spicy chipotle cream sauce. The chicken was tender and full of flavor with the spices used on it. The sauce was spicy, without taking away from the rest of the dish. It woke up the taste buds without being overpowering. I would recommend this meal on visits here. 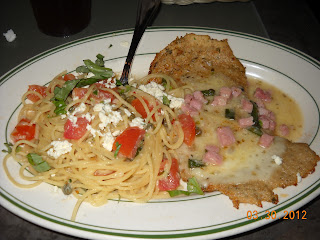 I have come to the conclusion that I should give up on ordering veal in restaurants. Not based on some moral grounds, but because I am almost always let down by it. Not saying this was a bad dish or anything, but I thought it would be better. Vitello alla Romana was my choice at Tutto Fresco. Veal scallopine sauteed in butter and sage, then topped with rosemary ham and provolone cheese. This sounded like it could not go wrong, right? Well, it was served only lukewarm, but was sent back and came out much better temperature wise. The veal was not as tender as veal should be. If I order veal I should be able to cut it with only my fork, that is the whole point of veal. The flavors here were not bad on this plate, I just expected more. This was served with a side of Spaghetti Checca, which is a pasta sauteed with tomatoes, feta cheese, capers, basil and garlic. Not a bad side pasta dish. It helped round out the plate. 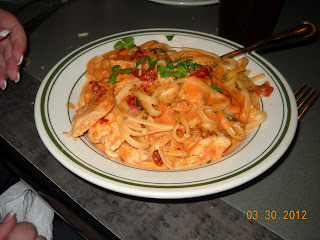 The last of our meals was Katie's, the Linguine alla Cardinale. This dish was comprised of ribbon pasta, with sun dried tomatoes, grilled chicken, and a tomato cream sauce. Not a bad meal at all. The flavor of this was a little on the mellow side, but was easily spiced up by some red pepper flakes. The tomato cream sauce was very good and clinged to items well. Sun dried tomatoes added a nice little sweetness to the plate. 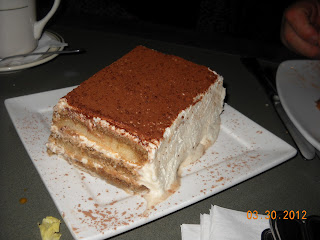 Dessert time at Tutto Fresco. We decided to get two of their selections and all split them. The first choice was the Tiramisu. I am not usually a tiramisu kind of guy, but this one was very good. Moist, without a very heavy espresso taste. You could still taste the espresso in there, but it did overpower the whole dessert. This is a very well made tiramisu, and a very good serving size. More than enough for two people to share. 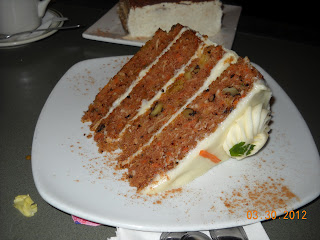 Also a big serving was our other dessert, the Carrot Cake. Four layers of cake with cream cheese frosting and walnuts. I just have to say it, this has been the best carrot cake I have had since writing this blog. Great moist cake, solid cream cheese frosting, and a nice, comforting spice added up to making this a great finish to this meal. Even if the meals were awful, I would plan to make a trip back here just to have that carrot cake again.

Fortunately the meals were not horrible, and we will probably return here in the future so I can have some more of that carrot cake. I might have been disappointed with my meal, but everyone else liked theirs. I will have to try something else on our next visit. The prices were not crazy out of control here either. Prices hovered around the $14 mark for almost all items on the menu. Service was very strong during our visit here. Glad we spent some time with our Italian experts, Chuck and Stephanie. Can not wait to do it again in the future.

Out of five hockey pucks, (because Rancho Santa Margarita native, Jonathon Blum, has played for the Nashville Predators in parts of two seasons. Pretty good for a kid from sunny Southern California), five being best to zero being worst, Tutto Fresco gets 3 hockey pucks.