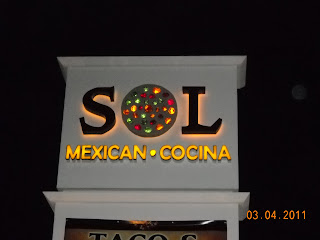 Sol Cocina
251 E. Coast Highway
Newport Beach, CA 92660
Sol Cocina is not my usual type of spot for Mexican food. I usually like small taqueria's, or Mom and Pop places where you can get big burritos, or tacos stuffed with cheese. I usually shy away from, "fancy" Mexican places like Javier's, or Las Brisas, because I feel that they are over-priced and have a stuffiness about them. We made an exception for Sol Cocina. We had been invited to a media event here a few weeks back, and liked the appetizers we had so much, that we put this place on our list of places to try during OC Restaurant week.

Sol Cocina has been opened for about a year and a half, and has been gaining praise in the media, and on-line in blogs. Like the restaurant, Chef Deborah Schneider has racked up an impressive list of credentials as well. Nominated for a James Beard Award for her second cookbook, and touted as the "reigning queen of San Diego chefs," she draws her inspiration from the Baja peninsula.

We arrived at 7 on a Friday night. We had reservations, and were seated right away. The vibe here is hip. All of the wait staff looks like they just came off the pages of a fashion magazine. They did not look down on us less attractive people, like many other places in Newport do. We felt very comfortable here. But enough about all of this, let's see if the food tastes as good as the staff looks. 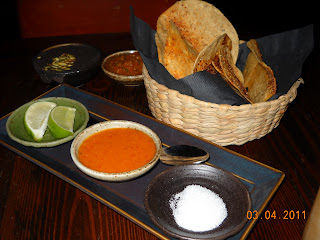 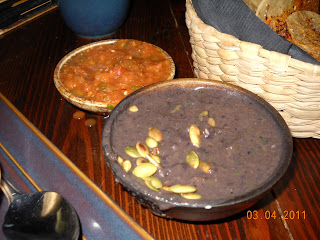 At Sol Cocina they do not have chips and salsa, they have their Taste of Baja, which is set on every table. The large, round tortilla discs were fair, but the winner of this grouping was the black bean dip with papetas on top. This was an addicting dip. The salsa had a little spice, but was tart at the same time, a nice contrast. 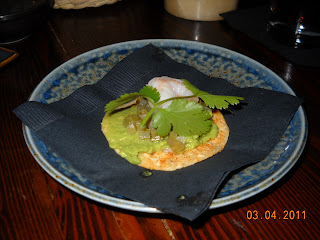 Sorry this picture seems so far away. This was the start of the four course restaurant week menu for me, the Nopales and Shrimp Tostada. This tiny tostada had a very mellow flavor. Very fresh tasting and light. 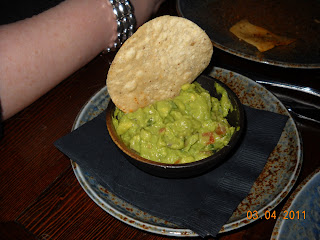 For her Amuse, Katie got a small Naked Guacamole. At Sol Cocina their guacamole is made with avocados, cilantro, lime, tomatoes, onion, and Serrano chile. Katie felt this was one of the best guacamole's she has ever had. She liked the citrus taste, with just a hint of spice. I liked this as well, but not as much as Katie. 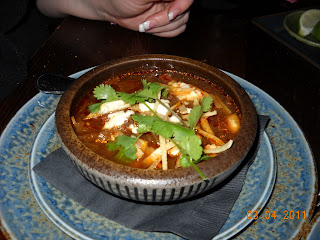 The soup above is the Mexican Onion Soup. This was a complex soup, with no two bites tasting the same. Sometimes sweet, and then turning spicy, each spoonful had a different degree of each. I would definitely get this again. 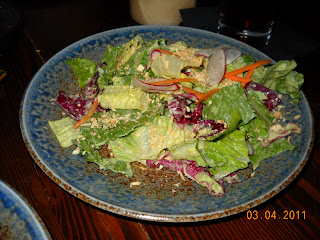 Something I would not get again, was this Avocado Caesar Salad. It sounded so good on the menu, but when it arrived it was nothing but your basic salad. The dressing was very tart, and I guess I expected hunks of avocado, but there were none.  Not the worst salad, but not worth ordering again. 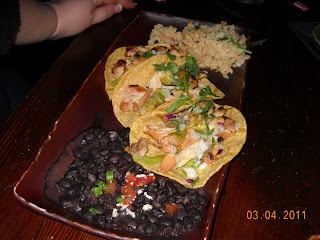 Now on to the main course, where Katie got her signature dish in a Mexican restaurant, the Chicken Taco Combo Plate. She felt that the chicken was tender, and not too greasy. She was also happy that the tortilla stood up to the meat. I liked the taste of these tacos, but would have added more hot sauce to them. These tacos were also served with Spinach Garlic Rice and Borracho Black Beans. The rice was forgettable, but the beans had a great flavor. 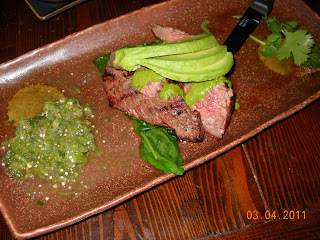 Pictured above is my dinner for the evening, the Garlic-grilled Skirt Steak with Cilantro Pesto. Cooked medium rare, this steak had a great flavor and was tender. The steak was made even better by pairing bites of the spinach and the meat together. I was however not impressed with the tomatillo salsa, but I am not a big fan of tomatillos normally. 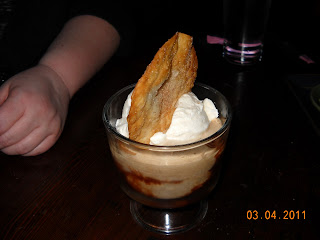 If Katie had her way this would be the flavor of the month at Baskin-Robbins. Espresso Sorbet with silver tequila and whipped cream. Not exactly what the ice cream man brought around in his truck, with that annoying music. Katie liked the balance of this dessert. I felt it was a little much. This definitely quenched Katie's need for Starbucks on the way home, and that is something that is not easily done. 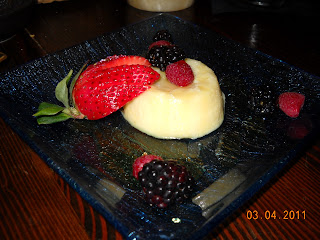 I will take a page out of Katie's book and let you know that this is one of the best flan's I have ever had. The Requeson Flan with Agave Orange Syrup and Fresh Fruit was what I got for dessert. Really creamy, and the taste was amazing. I am usually not much of a flan guy, but this is one I will get again. Great finish to the meal.

It was a pleasure to eat at Sol Cocina. The atmosphere was inviting, the staff did a great job keeping things moving in a orderly fashion, even though it was busy. It was a little loud in the wide open restaurant. The food was fresh, and the meal was not heavy at all. The prices were fair. They only have one meal over $20 on their dinner menu. But, they also have a steak and shrimp taco, served ala carte for $11. I still enjoy Mexican restaurants that cover their plates in cheese, but Sol Cocina will definitely be at the top of my list when we want a different, more upscale kind of Mexican food.