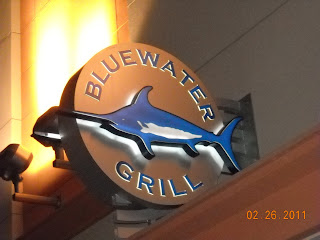 We came to the District in Tustin for the OC Restaurant Week Kickoff Party. Still wanting to get dinner after eating numerous samples, and having a few beverages, we were pleased to see that Orange County restaurant week started a day early at the District in Tustin. We took this opportunity to take advantage of this extra day to try Bluewater Grill. 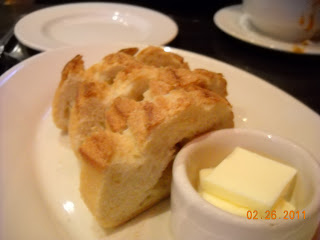 First a quick look at the bread basket that was on the table. This sourdough bread was served lukewarm, with a very hard crust. I like my sourdough to be a little sourer than this one was. 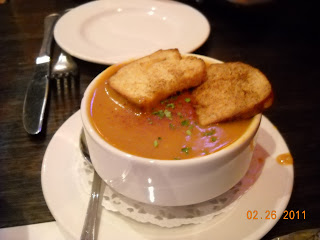 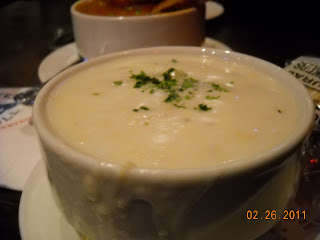 Both Katie and I chose to start off our first course with soups. She went with the Lobster Bisque. She felt this could have been creamier, but it did have velvety chunks of lobster in this. I liked the flavor of this bisque, it was rich and went down easy. I opted for the New England Clam Chowder. This smooth tasting soup was lacking in clams but had an over-abundance of potatoes. Decent soup, but the better of the two was the lobster bisque. 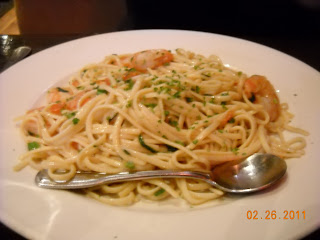 Katie's main course of Shrimp with Basil and Roasted Tomato is up next. This was served over linguini with chive oil and garlic. Katie felt this dish was good. Light in taste, but had an abundant amount of tender shrimp. This came out hot, and after eating this dish, Katie exclaimed that this made her want to try other items on their menu. Which I guess would be their goal by participating in restaurant week. Mission accomplished Bluewater Grill. 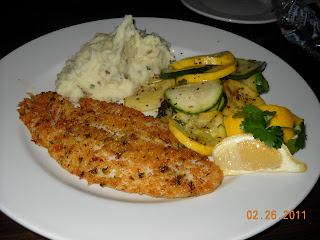 For my meal, I went with the meal behind door number three, "The Entree of the Day". Tonight it happened to be breaded catfish, with mixed vegetables and mashed potatoes. This catfish did not stand on its own. It was made better when I asked for a tartar sauce. Before the tartar sauce, it was just kind of blah. The veggies and potato were the same, average. 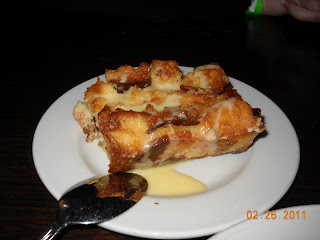 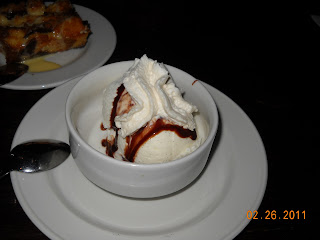 Now on to dessert. Above are the two choices for the dessert course. The Brioche Bread Pudding with golden raisins and bourbon sauce was the best out of the two. This bread pudding was cooked well, with a great texture, and the big banana flavor hit you right away after biting into this. I am not much of a bread pudding guy, but this one was pretty good. I would have liked to have had more sauce over this though. The Vanilla Ice Cream with Hot Fudge was fair but could have used more hot fudge.

I can not say that I was blown away by Bluewater Grill. The food was okay, but not something I would crave. It is, however, one of the better dining options at the District at Tustin. I have never been to keen on the restaurant choices at the District. None of them really pop out at me. The service at Bluewater Grill was also a little spotty. Maybe because it was pretty crowded, but our server got lost for long periods of time and did not check back with us. She may have had too many tables.

So out of five shopping bags, (because the second largest shopping center in the UK is called Bluewater), five being best to zero being worst,  Bluewater Grill gets 2.5 shopping bags.