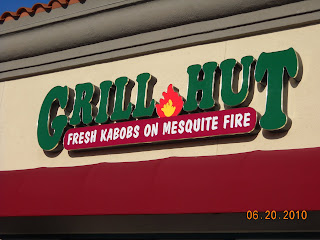 Grill Hut
28815 Los Alisos Blvd.
Mission Viejo, CA 92692
It was Katie's turn to choose what we were having for dinner. We both wanted to stay somewhat local, since it was a lazy Sunday night, so she decided to get Grill Hut in Mission Viejo to go. Grill Hut is in a shopping center that I never even knew existed, until we found ourselves there. They have two locations, (the other is in Laguna Niguel). Grill Hut has been in business since 1999.


I am in no way a big authority on Middle Eastern food, so I was not sure what to expect. The menu here is pretty limited, they have five types of kabob's, salads, wraps and sides. Let's see what we came up with. 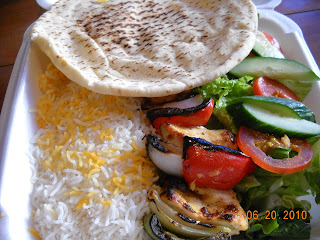 Katie opted for the Chicken Kabob Dinner. This is served with your choice of grilled tomatoes, green salad, or rice. She chose the latter two. I was a little disappointed that you only get one kabob with four pieces of chicken on it. Adding to our disappointment was the fact that the counter guy forgot our salad dressing, Katie had raved about the dressing, and she was visibly bummed to be without it. After adding some dressing from home, it tasted like your average salad. The chicken was okay, not spiced like anything, not bad, not good, just plain. 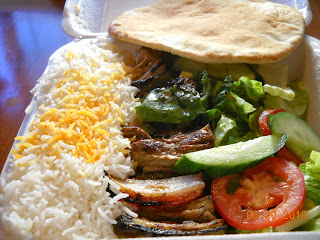 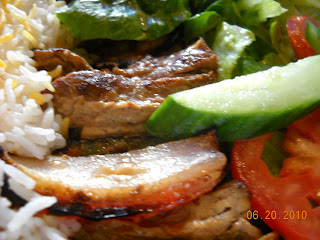 I had the Steak Kabob dinner. This was better than Katie's. The steak was seasoned well, and cooked perfectly. Very tender pieces of meat on this one. Of course you still only got four bite sized pieces of meat with this kabob. The vegetables were grilled well on this too. They really load you up on the rice. I could not even come close to finishing the amount of rice they gave us. The rice tasted fine, but how much of it can a person really eat? Also the salad was nothing special. 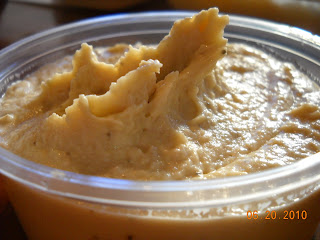 Lastly, we got a side of Humus with Pita Bread. I have never been formally introduced to Humus before, but this was very good when dipped with the pita bread. I am now looking forward to trying some different flavored humus that I have seen in the markets, so thank you Grill Hut for getting me on my humus kick.
Grill Hut as a whole was okay. I felt that it was over priced for what you get. The chicken kabob was $8.99, and the steak kabob was a buck more. I wish they had a combo plate, where you could try more than one kabob at a time. The sides were nothing special and they added extra sides to the plates to distract you from the lack of main course that they serve you. Probably will not go out of my way to go back, but I am looking forward to trying other Middle Eastern restaurants.
So out of five belly dancers, five being best to zero being worst, Grill Hut gets two belly dancers.
For more information on Grill Hut, click here: http://www.grillhut.com/