Taking a Seat at the Mayor's Table 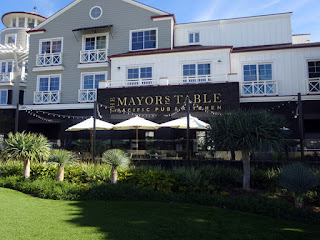 Besides the holidays being over, one of my favorite things about the calendar turning to a new year is that it's usually a slower time for restaurants. A lot of people are dieting or watching their money more closely, so they refrain from going out to eat. Not only is it easier to get a table at a reasonable hour, but restaurants are coming up with ways to get people through their doors.

One way to do this is by participating in restaurant weeks, and one of the better ones is Newport Beach Restaurant Week. This year it was held the last two weeks of January. Yes, this seaside paradise does not skimp on the opportunity to experience restaurant week, as it gives diners two weeks to try any of the many restaurants that participate in the city of Newport Beach.

For those of you that are unaware of what restaurant week is, it's a chance for restaurants to put their best foot forward by offering prix-fixe meals at varying price levels for lunch and dinner. There are no coupons or anything else to do, other than peruse the online menus, find a place you want to hit up, and then make reservations. I always try to find places that I have wanted to try for a while. One that attracted my eye really quick was The Mayor's Table, which was offering something on their lunch menu that I could not pass up.

I had made the mistake of letting the first half of Newport Beach Restaurant Week sneak by me without going out to eat, but I wasn't going to let that happen again. The Mayor's Table, which is situated at Lido House, a hotel that seemed to have popped up rather quickly at the former site of the City Hall, was offering a $25 dollar three-course lunch menu that featured their much raved about cheeseburger. Even though all of my friends and Katie were at work on this gloriously sunny Thursday, I decided I'd brave dining solo to try this burger.

This cheeseburger has reached almost mythical heights in my mind because it seems like the OC Register's Restaurant Critic, Brad A Johnson has written about it numerous times. Way more than any other restaurant that I can recall. He's named this burger the best thing he's eaten one week, it made his year-end wrap up of the 10 best burgers he consumed in 2018, and the restaurant itself was named one of his top ten of last year. There have also been numerous other features in other publications, so needless to say I was pretty excited to see what all the hype was about.

After parking a couple of streets over, I wasn't going to pay for valet parking, I arrived at the Mayor's Table right at 11am and was met with a totally empty restaurant. At first, I thought they weren't open, but the hostess sat me and assured me that the lunch rush would fill in the tables surrounding me shortly. The dining room here is one of the most comforting I have experienced in a while. Comfy blue upholstered booths, a large patio set far enough back from the street for the warmer months, and a glorious glance at the action going on in the kitchen are all highlights of the dining space.

Speaking of the kitchen, it is helmed by Executive Chef Partner, Riley Huddleston. He got his start in New York and Chicago before making his OC debut here. He has worked every aspect of the restaurant business. He's an accomplished mixologist, pastry chef, and chef. His vision for the menu at the Mayor's Table is precision and playfulness that highlights Newport's refined, yet stylish coastal lifestyle. At least that's how they describe it on their website. I was very excited to give their Newport Beach Restaurant Week lunch a try, so let's see if this burger is as good as everyone says. 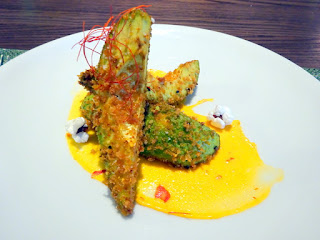 The first course of the menu featured three selections to choose from; a beet salad, a Pacific seafood chowder, and what I eventually went with, this Crispy California Avocado ($12). I first thought this was going to be something that you'd see at the fairgrounds in July, but it was way more subdued than anything you could get at the OC Fair. Three slices of avocado are breaded and fried, then served with Caribbean chili mayo and two pieces of puffed corn. The breading was very light and did not get in the way of the smooth and creamy avocado. The chili sauce was fine, but the consistency was a little too thick and not easily incorporated with the avocado. The popped corn was fine but really seemed out of place and unnecessary.  Good avocado though. 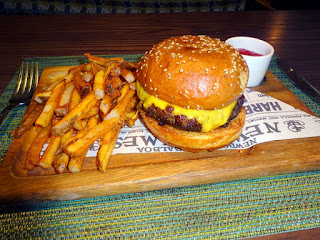 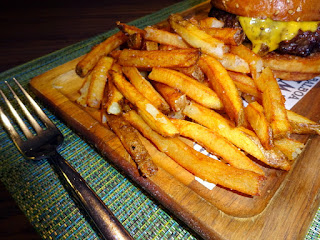 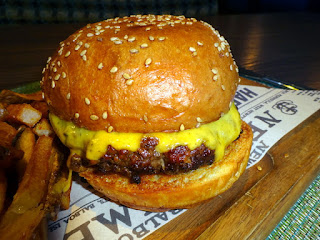 Well, now the heralded All Natural Cheeseburger ($18). This burger was close to a half a pound I'd guess, came with a little aioli, and a blanket of cheddar cheese covering the patty. The sesame bun was nice and high and did a great job absorbing the juiciness of the beef blend that they use here. A very simple burger, my first few bites were a little underwhelming due to the fact that they were a little too conservative with the application of the aioli on this. After my server brought out more, it was a much more enjoyable burger for me. Tasted like a backyard burger, if my parents would ever opt for upgraded beef and better cheese than Kraft Singles. That will probably not happen though. The hand cut fries were good and fresh, but I'd like them to be a little crisper. 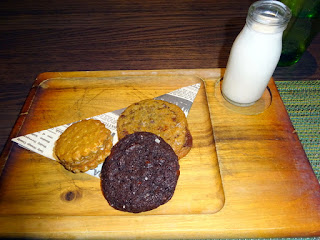 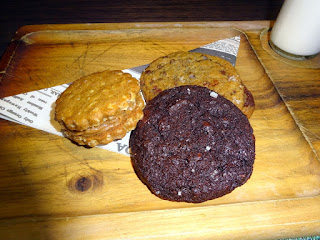 Dessert was the last of the three course restaurant week lunch, and they had this Lido House Cookies and Milk ($12) or a cheesecake option. Being the cookie fiend that I am, I naturally went with the cookies. Each one was excellent. I had planned on going by Alta Coffee for one of their cookies on the way back to my car, but these cookies negated that plan. They had a great crunch on the outside and a chewier middle, which is the perfect cookie in my opinion. A very tasty end to my solo lunch at the Mayor's Table.

I had almost unrealistic expectations for the burger at The Mayor's Table, and although it was good, I was not blown away. For me, I love a great burger, but I put a lot of emphasis on how the toppings and condiments interact with the beef and bun. This cheeseburger was good and made with excellent ingredients, but it needed a boost with some extra aioli and definitely, some bacon would have made this better for me. What this visit did do, as is the goal when restaurants participate in restaurant weeks, it has piqued my interest for a return visit. I have my eye on the crab doughnuts, truffle risotto, sea bass, and other items on their compact dinner menu. The burger and the Newport Beach Restaurant Week has gotten me in here, now it's up to the rest of the menu to convince me to return more frequently.

Out of five footballs, (because if you are sitting at a table with the current mayor of Newport Beach, Diane Dixon, she'll probably want to talk about the glory days of USC's football program, since she's an alumnus), five being best to zero being worst, The Mayor's Table Pacific Pub and Kitchen gets 3 footballs.

For more information about The Mayor's Table Pacific Pub and Kitchen, head to their website here: http://www.lidohousehotel.com/mayors-table-pacific-pub.html
Posted by OCEater at 5:45 AM