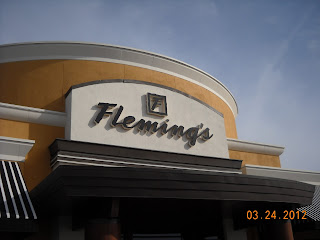 We've been to Fleming's numerous times, and all those times we have been here through the run of this blog it was for a promotion, and I realized that we have never really done a proper review of this restaurant. I often don't really think of Fleming's when people mention steakhouses, even though I have never had anything but a great experience here.

The main reason for that is geography. Fleming's is off by itself at Fashion Island, while the rest of the great steakhouses are all located at, or near South Coast Plaza. Mastro's, Morton's, and Capital Grill are all situated in Costa Mesa, while Ruth Chris is just a stone's throw away in Irvine. With all the visits to Fleming's we have made in the past, we have learned that Fleming's should not be disregarded, just because they are kind of out on their own island. No pun intended.

This Fleming's location is the flagship of this chain, which was founded in 1998, and has since grown to 67 locations in 28 states. Started by major restaurant veterans, Bill Allen and Paul Fleming, who have had a major hand in creating and overseeing some of the most well-known restaurants out there. P.F. Chang's, Paul Martin's, Pei Wei, Roy's, Habit Burger, and more have been under their leadership at one time or another.

Each Fleming's is run by a chef partner and an operating partner. When we first started coming here this spot was run by Russ Bendel and Chef Chris Hutten. Both have moved on, and the reigns have now been turned over to Operating Partner Stephen Blevins and Chef Partner Kevin Monahan. We were curious to see if they maybe had lost a step, but the busy dining room on this Thursday evening gave no hint of that. Let's see if Fleming's should be considered one of the better steakhouses in OC. 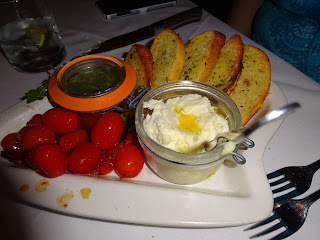 First off, I'm going to apologize in advance for my sub-par pictures on this evening. We were seated in a rather darkened area of the restaurant, and I snapped pictures as quickly as possible, as to not disturb the other guests seated around us. Anyways, Katie decided to start things off with this House Burrata ($13.95). This do it yourself starter came with charred grape tomatoes, toasted garlic points, arugula, and of course the creamy burrata. Katie loved the presentation here, with the creamy cheese and perfectly done toast as highlights. 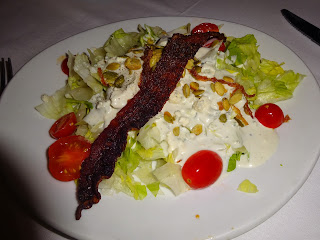 I'm a big fan of wedge salads, so the New Wedge Salad ($11.50) needed to be ordered. I know it's not in the form of a wedge, I had them chop it up for me, which makes it a lot easier to eat. Not sure what makes this a new wedge salad. It featured some very fresh iceberg lettuce, grape tomatoes, chunky blue cheese dressing, caramelized bacon, and crispy onions. Maybe what made it new was the inclusion of some toasted sunflower seeds, which the menu did not mention. This was a very solid salad. I really enjoyed the blue cheese dressing here. It had a good blue cheese flavor to it but did not overpower. The sunflower seeds and crispy onions added a nice texture element, and the bacon, which would have been better crumbled up instead of served as a strip across the salad, was delicious as well. 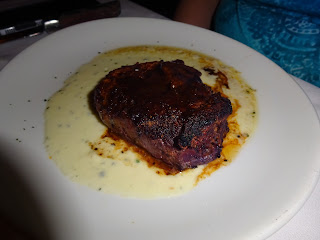 I was a little shocked when Katie went with this Petite Filet Mignon ($49.45), instead of the seafood dish she was eyeing before we got here. I always cringe when Katie orders her steak in a place like this, because she always gets it medium well, which usually ruins it. Even though that's the way this 8-ounce prime steak came out, they still managed to make this edible. Maybe it was the pocini mushroom rub, with a garlic butter and Gorgonzola cream that saved this. Whatever magic they worked back in the kitchen, Katie made quick work of this steak. 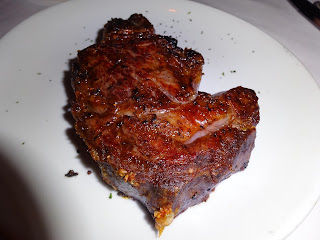 I went pretty big here, with their Dry Aged Prime Rib Eye ($58.95). Unlike Katie, I ordered this 16-ounce steak the right way, medium rare. It came out beautifully. Tender, slightly charred on the outside and made even better with a very well done Bearnaise sauce, which was complimentary. I could have eaten my shoe with that Bearnaise. A very satisfying entree, but we were not done yet. 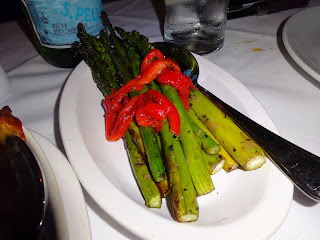 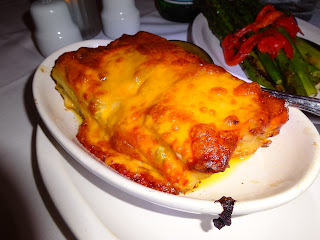 As is the case in all these high-end steak restaurants, sides are not included with the entrees, so we ended up each ordering one here at Fleming's. Katie picked the Grilled High Country Asparagus ($12.50), and I have to admit that when she ordered this, I was not too excited about it. She redeemed herself when I got the chance to try this and proved that not all asparagus is equal. This was some of the freshest I have had, and it was seasoned wonderfully with black pepper and salt. The Fleming"s Potatoes ($12.50) were also not to be missed. I assume Fleming's does not feel the need to have a lobster mashed potato, because this potato casserole is so good, and they are correct. A wonderful combination of cheddar cheese, cream, and mild jalapeno elevate the potato to new heights. Just like I go to Mastro's for just their butter cake sometimes, I could see myself coming here just to order these potatoes, they are that good. 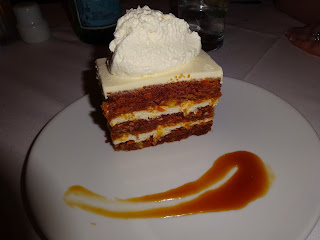 Dessert was going to be our last hurrah here at Fleming's on this evening, and I'm almost always drawn towards Carrot Cake ($11.50). This was a good, not great version of this classic cake. Three layers, each separated by a light cream cheese frosting, encased the cinnamon-tinged cake. I though the cake portion was served too cold and could have been a tad moister. Not as memorable I would have hoped.

Fleming's on this evening proved that they belong in the conversation of very good steakhouses in OC, even if you don't immediately think of them. The steaks are the stars here, but the sides and appetizers are great in their supporting roles. I wish they had a signature dessert like that awesome butter cake from their rival that I had mentioned earlier, but still a good night at Fleming's. Even though this area of town can feel a little snobbish, I have never encountered this at Fleming's. The ambiance here is more on the lively side, with a very boisterous bar crowd, which seems to give dining room guests a green light to be a little more relaxed as well. The feeling of the dining room has always kind of felt like a cruise ship dining room to me, which is not a bad thing, as it has the feel of vacation to it or at least a vacation from your day. Service was excellent here. Our waiter Michael was professional and personable and the rest of the staff we encountered were fantastic as well, with management being very hands on. I also have to mention that Fleming's offers some great three course seasonal specials throughout the year, and has a great prime rib special going on now on Sundays and Mondays. So meals here can be a little more affordable than some of their competitors. With all of that said, I have them third, right behind Maestro's and Capital Grille as the best high-end chain steak restaurant in OC, but as always, these rankings are subject to change based on my next visit. Glad we finally made it to Fleming's to do a proper review, and we won't forget about them in the future.

Out of five shots, (not because of the ones being served in the bar here, but for Scottish Biologist, Alexander Fleming, who helped discover penicillin, which is sometimes given in shot form), five being best to zero being worst, Fleming's gets 3.5 shots.

For more information about Fleming's, check out their website here: https://www.flemingssteakhouse.com/