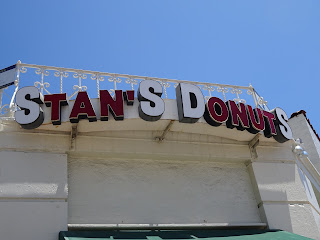 It has pretty much become a tradition that when we are headed up this way to visit Katie's extended family, we stop for donuts on the way. Why donuts you ask? First off my mom taught me to never show up at someones house empty handed, and even though Katie and I have been together for over seven years, I still want to impress her crazy family. Secondly, one of my favorites of all her cousins, Gabi, is donut fiend. We bonded over our favorites the first time we met each other, so this is kind of an ode to her.

On our way up to Valencia or Burbank, there's some pretty good donut shops that run alongside the freeways, so they are convenient to pick up and continue our trek up into the valley. We have picked up donuts from Randy's near LAX, the Donut Man in Glendora, and now Stan's Donuts in Westwood, right near UCLA.

Stan's is kind of a big deal to Katie's family, because one of their heroes visited here. Back in 2005 Huell Howser famously visited this tiny Westwood donut shop, and he even has a donut named after him, but we'll get to that a little later. Stan Berman, a third generation Russian baker opened up this corner shop back in 1963, and has been selling tons of donuts to hungry college students, celebrities, and tourists ever since. The donuts are so popular that they now have  even expanded with six locations open in Chicago.

Back in LA though, we only have one spot to get Stan's donuts, and that's in Westwood, where they share a tiny space with Flame Broiler at the corner of Weyburn and Broxton. They will ship you donuts, but at a steep price. A regular dozen goes for $32.50, while the more popular gourmet donuts go for $40 a dozen, and this does not include shipping. Pretty pricey, but are they worth it? Let's check out what we ordered. 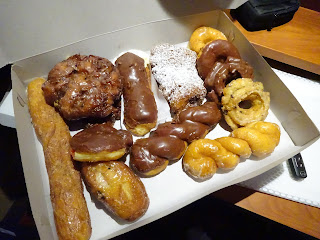 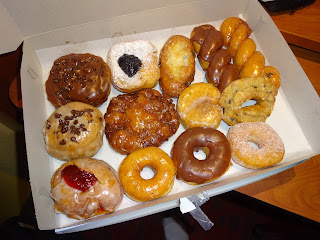 A little overwhelmed by the amount of choices, we ordered two of the Stan's Sampler's, which include 5 gourmet donuts,  4 jellies, bars, or twists, and 4 regular donuts for $29.50. Yes, we spent nearly $60 on 26 donuts. We might have a problem. This was a good representation of the donuts available at Stan's though. Someone actually counted all the varieties that they have here daily, and came up with 72 different kinds. 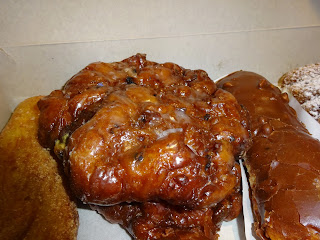 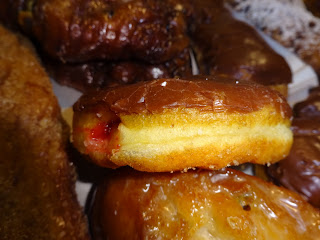 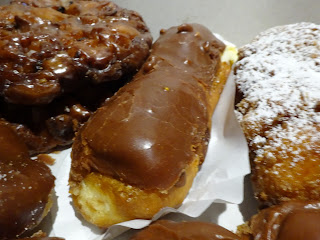 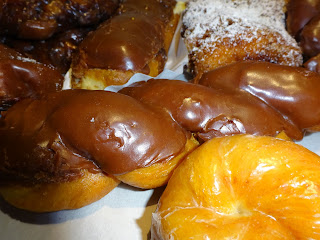 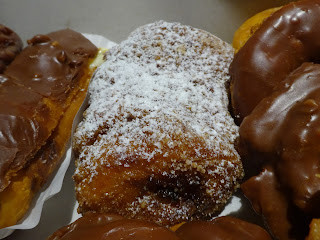 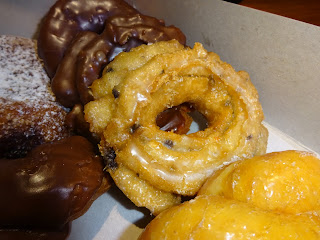 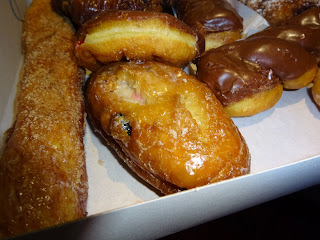 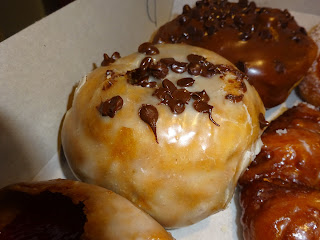 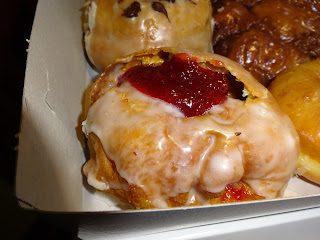 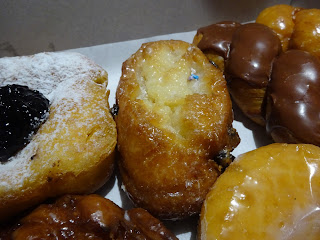 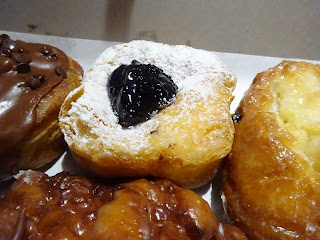 Of course I did not sample each of these donuts, as they were mainly for everyone at the party, but people were pretty excited by these, and if I do say so myself, they were definitely a hit. I liked that there were different varieties than what you can usually get at your corner donut shop. They offer plenty of jelly filled offerings, lots with blueberry, including a very solid blueberry fritter. The apple cinnamon log was also a big hit, but I had my sights set on one particular donut, and kept it for myself before the party. 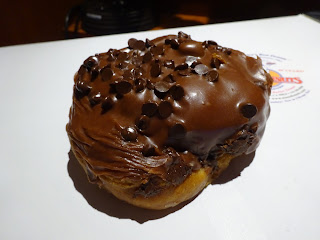 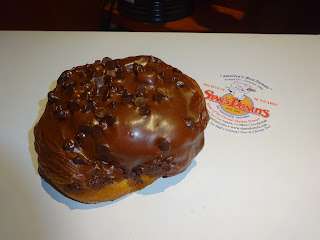 Behold the most famous of all the donuts that Stan's makes, The Huell. Named of course after Huell Howser, who claimed that this was his favorite donut, and even did a whole episode of his TV show, "California's Gold" from Stan's proclaiming his love of this Peanut Butter Pocket. Yes, a peanut butter filled doughnut, which is then dipped in a generous amount of chocolate and sprinkled with chocolate chips. Pretty amazing, and a definite must if you love peanut butter and chocolate like I do. This donut is definitely worthy of all the hype surrounding it, and even writing this review has got my mouth watering.

After having the donuts from Stan's, I am going to claim that these are the best donuts I have had in Southern California so far, and they only trail the ones I had at Doughnut Plant in New York in my all-time ranking. It's going to be pretty hard driving up the 405 and not stopping by Stan's for their fresh, hand made, non-greasy donuts. Besides the Huell, I also tried bites of others, and they were all pretty stellar. Thanks for making me the hero of the party Stan's. We will definitely be back.

Out of five bruins, (not only because this is the mascot of nearby UCLA, but also because it's almost unbearable to be without these donuts), five being best to zero being worst, Stan's donuts gets 4 bruins.