All Roads Lead to Roman Cucina 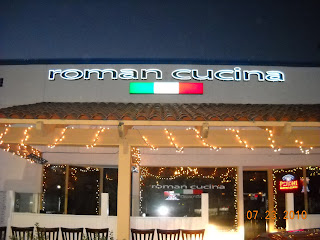 Roman Cucina
25214 Cabot Rd.
Laguna Hills, CA 92653
Sometimes it is really hard to write this blog. Especially if the place that we go is just average, or the food is un-inspired. This is not going to be a hard entry to write, simply put, this place rocks! I can not even string you along to make you wait to see how I am going to rate this place. But please read on though, and see what we ate, or at least look at the pictures, you will not be disappointed.

Roman Cucina has four locations in the OC, (Sunset Beach, Costa Mesa, and Fullerton are the others).  Katie was coming over for date night, so I headed to Yelp to find a place to try. This place had great reviews, so that is where we headed.

Roman Cucina is tucked in a shopping center that's big draw is a Wienerschnitzel, and a Howard's Electronics. The outside is un-assuming, but once inside the place is buzzing with activity. We arrived on a Friday night about 7:30, and are sat right away. This restaurant has a downtown Fullerton vibe to me. The staff is all young, and the owner is walking around talking to his guests. Let's see the food we got... 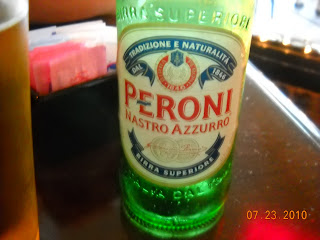 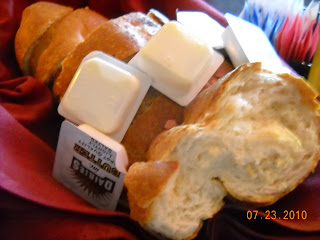 I ordered the Peroni, a nice light beer from Italy. Also above, is the bread that is served with the meal. It is your basic french bread. Not too keen on the butter packets though. I would have rather liked a dish of butter, but that would probably be my only complaint all night. 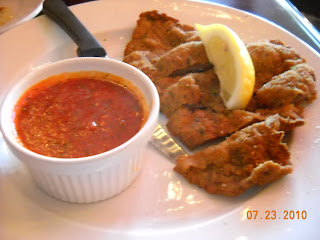 For an appetizer we chose to get the Milanese. Breaded cutlet of beef, pounded thin, and served with red sauce. I had never had this before, and it was delicious. The flavor of the meat was enhanced with a few squirts of lemon over it. The red sauce on this was good as well. 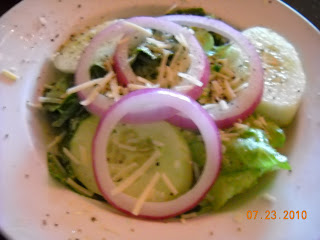 Each of their meals comes with this House Salad. Romaine lettuce, with red onion, cucumber and a vinaigrette dressing. Your basic salad, but with fresh items in it. 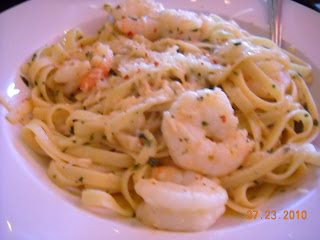 Katie went with her old standby in an Italian restaurant, the Shrimp Scampi. She chose the fettucine pasta to go along with the white wine sauce and lemon garlic sauce that make up this dish. She has had a run of scampi's that have been un-flavorful, and this dish put an end to that streak. The flavors were abundant, but not over powering. We have also been going to a lot of places that have left the tails on the shrimp, and this place did not leave them on, a nice change. 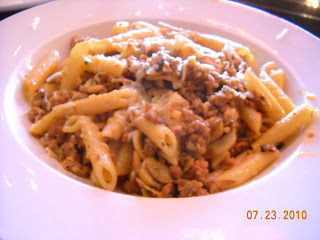 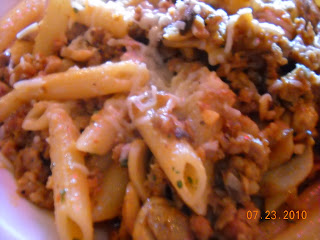 My dish is up next. After much debate, I went with the Pasta Tombrello. This plate is comprised of ground Italian sausage and mushrooms with a spicy Bianco Diavalo sauce. Usually when a place says that an item is spicy, it is not and I have to ask for red pepper flakes to kick it up, this was not the case here. This had a lot of spice, the pasta was cooked perfectly, and the sausage was plentiful. One of the best pasta dishes I have had in awhile. 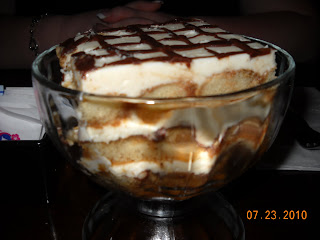 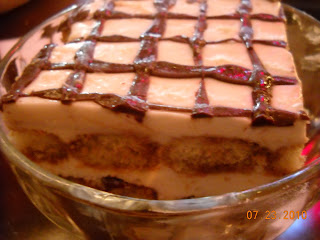 I am not much of a tiramisu guy, but this one was really good. I liked the size of the portion, and the moistness was right on. Very good end to a good meal.

The menu here is pretty standard Italian faire. They do not have veal, or some of the fancier dishes that other Italian restaurants have. But what they do have is a solid menu, that anyone can find something to like. The food here is not complicated, it is pretty straight forward. The owner told us that he got the recipes from his grandmother, and I could picture her teaching him the tricks of the trade.

The owner had a great attitude and it seemed to spread to the rest of the employees. All of the customers seemed to be very pleased, and I hope that this odd location catches on. Entrees are in the $13 to $18 dollar range, and they have fair sized portions for the money.

So out of five togas, five being best to zero being worst, Roman Cucina gets 3.5 togas.