A Trip Outside the Orange Curtain 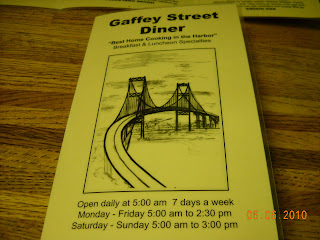 My work schedule is about to change, and this was going to be the last Sunday I was going to be off for a while. So Katie and I decided on trying a place where I could use my new GPS, and have a good breakfast. We like trying places that we have seen on TV, so we settled on Gaffey Street Diner in San Pedro.

This place was featured on Diners, Drive-Ins, and Dives with Guy Fieri. We have had some good luck with Guy's picks, (Twisted Root Burger in Dallas), and some bad luck as well ( The Four Kegs fiasco in Vegas), but we are always up for letting Guy redeem himself. This restaurant is owned by a husband and wife team that is known for making much of their food in the house. It has to be good right? Let's see what we came up with. 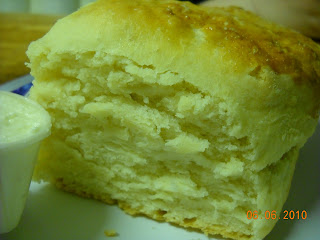 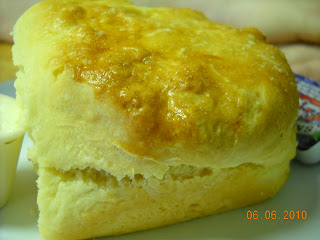 This is the homemade biscuit that came with Katie's meal. The pictures make this look better than it was. I felt that it was a little dry and did not have much flavor. I really wanted to like this better, because this is one of the things they made on the show. 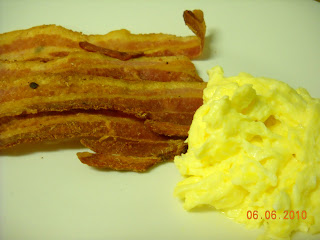 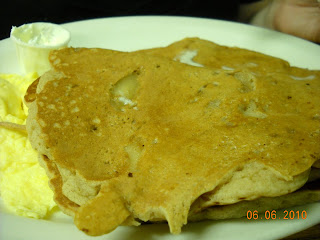 Katie got the Apple Pancake special. The eggs and bacon came out cool, and fast. But, they made a mistake and brought out more eggs and bacon with the pancakes, which were much fresher. The pancakes were the best part of this plate. They were really heavy on the cinnamon and did not skimp on the apples. They were really rich and flavorful, a good pancake and much better than the ones I have had at the Original Pancake House. 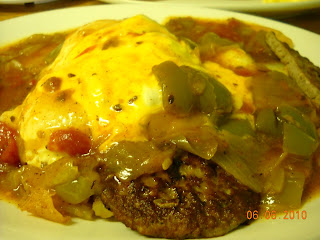 This colorful looking plate is the John Wayne. The story goes that when the owner worked at a different restaurant, John Wayne used to come in and ask for something that would cure his hangover, and this is what he came up with. Home fries on the bottom, eggs, and cheese in the next layer, and then a chili Verde sauce on top of that, garnished by two sausage patties. This breakfast was as flavorful as it looks. Everything melded together well, and I would definitely get this one again. The Duke does it again!

I liked the Gaffey Street Diner. I was expecting it to be a little better though. When you see a place on TV you expect it to be out of this world, and this restaurant was good, but not great. It makes me wonder how these places get on the radar of the producers of these shows because this is the type of place you would just drive by, and not think about going. It is a good solid place though, and the service was good and fast. They really made you feel at home.